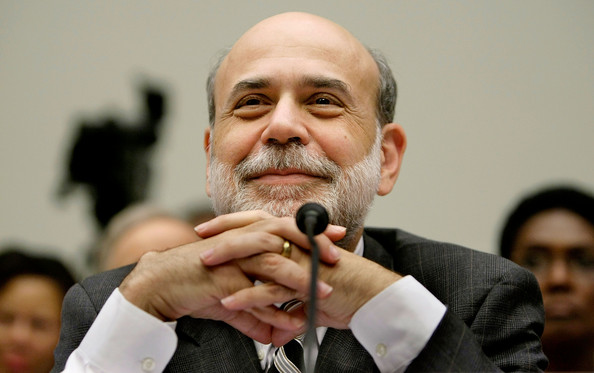 Former Federal Reserve Chair, Ben Bernanke, is finding another career, post-Fed. With the large speaking fees drying up a bit, Bernanke has decided to go into the blogging business with the Brookings Institution.

For anyone who believes in a free market economic system, Bernanke’s comments will either make you want to throw up or you will find them entertaining. Maybe both.

In one of his first posts, Bernanke asks, “Why are interest rates so low?” He first justifies low rates in the U.S. by pointing to even lower rates in Japan, Germany, and elsewhere.

Bernanke says that the Fed is keeping rates low “only in a very narrow sense”. He then goes on to defend all of the actions by the Fed to help keep rates low. Bernanke also says, “what matters most for the economy is the real, or inflation-adjusted, interest rate”. If that is the case, then we have had mostly negative real interest rates since late 2008.

Bernanke then goes on to address criticisms of him throwing seniors under the bus. But this is right after he says that it is real (inflation-adjusted) rates that matter most. If real rates are negative, then of course seniors would be hurt the most by this, especially those with savings and fixed income.

Bernanke defends his policies saying that if the Fed had raised interest rates prematurely, then this would have led to an economic slowdown and “the slowing economy in turn would have forced the Fed to capitulate and reduce market interest rates again.”

You have to love this logic. We have to have low rates for 7 years because if interest rates go up, then we will have slower economic growth and then be “forced” to lower rates again. In the logic world of Bernanke, why would anyone ever have anything above a zero percent interest rate?

So senior citizens, you should be thanking Bernanke for his deep concern for your well being, even if you are losing purchasing power on your savings every year.

How Would We Get Interest Rates Without the Fed?

Bernanke’s comments get even better and more entertaining. He states the following:

Bernanke doesn’t understand how people can question the Fed setting interest rates, even though above he says it is only in a very narrow sense. Bernanke says it is legitimate to argue about where the equilibrium rate is at any given time, but he is basically insisting that there can be no debate on the Fed actually setting rates.

In his comments, he puts “the markets” in quotes because he can’t fathom how the markets could handle such a function. In case Bernanke was not aware, the Fed has only been in existence for just over 100 years. What did the U.S. do from the late 18th century to 1913 without a central bank?

According to Bernanke, there must not have been any lending or borrowing. How could this have possibly happened, because interest rates couldn’t have existed according to Bernanke? After all, it is not possible for “the markets” to determine rates in the world of Bernanke, so how could anyone have borrowed money or lent money without a central planner telling each party how much interest to charge?

And just in case you don’t fully understand the world of Bernanke, you must also realize that the Fed cannot possibly distort financial markets and investment decisions. In the world of Bernanke, the housing bubble and subsequent bust had nothing to do with central bank policy. It is just the fault of greedy lenders and irresponsible consumers.

Bernanke himself told us that there was no housing bubble at the time, so we surely can’t blame the Fed for anything.

We have seen the world of Bernanke just from one blog post, so there is sure to be more fun in the future. And by the way, don’t bother reading the comments on his blog. They are obviously being screened, or they might just have a full-time person posting various comments under different names. There may be some light criticisms for show in the comments, but most will not come anywhere close to questioning the Fed itself or its inflationary system of fiat money.

The Economic Implosion of Saudi Arabia
A new war is not all that is going on in Saudi Arabia. The tables have turned. Stocks in Saudi Arabia were extremely volatile, losing 5 percent during one day of trading.
The First Step to Nationalizing U.S. Banks
No, you're not schizophrenic. They ARE watching you!
How to Rig the Gold Market
New electronic gold fix to provide more transparency.
Buffett's Envy: 50% Annual Returns, Guaranteed
Warren Buffett once told investors at an annual shareholder meeting, "...it's a huge structural advantage not to have a lot of money. I think I could make you 50% a year on $1 million. No, I know I could. I guarantee that."