Here's When Platinum Prices Will Rise...

Mine Strikes vs. Platinum Stockpiles

Strikes in the mining industry can spread like a wildfire across parched timberland, as strikers march from mine to mine, company to company, inciting more workers to join their cause.

This time, it's the platinum industry in South Africa that's ablaze. No sooner had one lengthy walkout at Northam Platinum Ltd. ended on January 21st than another strike quickly flared up two days later. And this one is huge.

The latest strike began January 23rd, and it has engulfed none other than the world's top three platinum producers — Anglo American Platinum, Impala Platinum Holdings Ltd., and Lonmin Plc. The Association of Mineworkers and Construction Union (AMCU) has mobilized some 70,000 of its members to walk off the job, demanding basic wages be more than doubled to 12,500 rand.

The conflagration grew as a second labor union — the National Union of Metalworkers of South Africa (NUMSA) — pulled some 1,800 workers out of platinum refineries and smelters.

This means platinum production in South Africa is taking hits all along the production line — from the mines to the furnaces and everywhere in between. And since these three producers account for some 60% of global platinum production, you might expect platinum prices to soar through the roof. Right?

If that makes you scratch your head, it shouldn't. This is precisely what happened when Northam Platinum miners went on strike back on November 4th. It wasn't until six weeks into that strike that platinum prices started climbing.

Why the delayed reaction? Let's find out...

Buyers Not Desperate Yet

Commodity markets are a lot like college students; they don't start to panic until the fridge is completely empty. Buyers of platinum from consumer electronics manufacturers to auto makers have access to a decent supply of aboveground stocks for the time being. Although labor strikes had plagued platinum producers throughout 2012 and 2013, quite a lot of fresh supply made it into warehouse stockpiles.

According to estimates calculated by Barclays Bank, platinum stockpiles reserved at the NYMEX warehouses for futures contract delivery grew by 20% in 2013, adding some 40,000 ounces to reach more than 250,000 ounces currently.

The bank further estimates that the world's top platinum producers grew their own inventories last year by some 200,000 ounces.

This means that in 2013, a surplus of some 240,000 ounces of platinum was added to stockpiles. We can understand now why prices didn't react right away to the strike of last November.

They did react eventually, as the graph below shows. 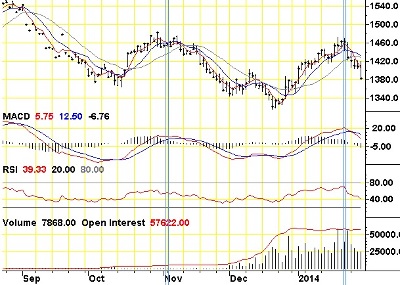 From the start of the Northam Platinum strike on November 4th (first blue lines), platinum prices had fallen more than 10% until December 19th — some 45 days or six weeks into the strike.

Once a fair bit of inventory had been drawn down, buyers began increasing their orders quickly, as they don't want to be buying when stockpiles are slim amid rising prices.

As a result of that rush to buy, platinum prices rose 10% until the Northam strike was finally settled January 21st.

So here we are at the start of another strike as of January 23rd (second blue lines), and once again platinum prices are falling.

For four weeks from December 19th onward, buyers had increased their purchases for fear of not being served if they waited too long. This now leaves them with surplus inventories. Factor in the surpluses at the NYMEX and the producers' warehouses, and we can understand why buyers are not very anxious to buy just yet.

But if we run some simple calculations based on Barclays estimates, we quickly see that just as platinum prices turned around sharply in the middle of the last strike, so too will they likely turn again this time.

Although the current stockpiles at the NYMEX and in producers' inventories are larger now than they were last year by some 240,000 ounces, the strike this time is much bigger — shutting down the world's three largest platinum producers and stopping 60% of global production.

Let's see how much of an impact this strike can have on stockpiles using Barclays Bank estimates, as reported by ScrapRegister.

Now, keep in mind that stockpiles are being tapped into already; stockpiles are falling even now, given the closure of the top three producers. Even so, if the strike lasts less than 68 days, stockpiles can be replenished by the end of the year and will still have grown in 2014.

But if this strike lasts more than 68 days, stockpiles will not recuperate by the end of the year, and 2014 will register a net loss in platinum inventories.

So counting from the start of the strike on January 23rd, 68 days takes us to about March 31st, or some 9.5 weeks in total. If the strike is not settled by then, platinum prices should rise, as the drawdown to stockpiles will be unrecoverable for the remainder of the year.

Incidentally, Bloomberg reports these three affected producers have built up just 8 weeks' worth of inventories — quite close to our 9.5-week calculation. Buyers may be content to sit back and wait a while, but once those 8 weeks of producer inventories start to deplete, they’ll be shouting their buy signals with both hands as they fight for NYMEX's platinum. Now that should drive futures prices through the roof.

Of course, all these estimates and calculations of ounces and weeks tell us is when we might expect buyers to start getting nervous and actually start driving up platinum's price. How high the prices climb is anybody's guess. That will depend on how long this strike actually lasts.

Northam's strike lasted from November 4th to January 21st, or some 78 days. This time around, however, things are a little more complicated.

"These strikes have been coming for some time and the companies have been preparing for them for 12 months plus," Justin Froneman, a Johannesburg-based equity analyst at SBG Securities Ltd., cautioned to Bloomberg. "They're ready for this to drag out for a long time."

We can see that. The longer the strike lasts, the more money the miners will save — some $8 million in wages per day. It will also allow stockpiles to deplete, which will eventually drive up platinum's price and allow the producers to generate more revenue when they eventually start producing again.

As for investors, waiting for that timely moment when buyers start getting nervous is futile. Timing the turning point when platinum's price stops falling and starts rising is impossible. Buying a little now and then a little more on further price weakness would be the wiser move.

Once in, keep following the news for an announcement of the strike's settlement. At that point, as at the end of Northam's strike on January 21st, you had better sell in a hurry — for once this 60% of global production comes back online, you can expect platinum prices to nosedive quite sharply.