Plastic changed the world and without a doubt is one of those magical products without which modern life as we know it would simply not be possible.

Prior to the advent of the world's first fully synthetic plastic, called Bakelite, in 1907, the only moldable non-metallic materials known to man were glass and ceramics.

With the further development of synthetic plastics into an ever-growing list of increasingly cheap, increasingly specialized formulas, plastics became the material of choice for consumer product packaging in the second half of the 20th century.

Today, an estimated 380 million tons of plastic enters circulation each and every year, with a vast majority of it going into single- or limited-use products such as disposable food and liquid containers.

Despite the apparent efforts of governments, corporations, and citizens, more than 90% of that unthinkable mountain of synthetic material is not recycled and winds up either in landfills or in the world's waterways.

Biodegradation for traditional plastic in a natural environment takes between 450 and 1,000 years.

We've Dug Our Own Graves... And Now We're Filling Them

It doesn't take a genius to see the problem here. What was once a technological marvel became an everyday convenience, which evolved into an addiction, which brought us here today.

We cannot live without our single-use plastic containers. In fact, our addiction is getting worse — instead of slowly curtailing use, we're actually coming up with new and novel ways to create increasingly smaller, increasingly more plentiful pieces of plastic garbage.

The best example from recent history is single-use coffee pods, like the ones pictured below. 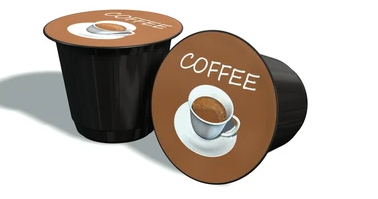 Twenty years ago, these were barely known to the consumer world. Today, we use over 50 billion of them per year.

Because why use a normal coffee machine with a standard paper filter when you can just add another piece of trash to our collective mass of post-consumer waste, just to make yourself a small warm caffeinated beverage?

Well, as selfish and inefficient as the coffee pods may seem from anything resembling an objective viewpoint, we still use them at a rate of about eight per year per human being living on planet Earth.

And that's just one item. Just one product type among the hundreds out there.

Plastic Will Be More Abundant Than... Fish?

According to a study by the Ellen MacArthur Foundation, by the middle of the century, plastic refuse may outweigh the sum total of fish in the world's oceans.

We can't just stop using the stuff. That much we've proven as a species. What we can do is make the stuff less harmful.

So what makes it special? Well, this new material, which has been referred to as plastic 2.0, beats the original on two fronts. First of all, it's a fully plant-based material, making it far more environmentally friendly just on the production end.

But the real difference is the product itself. Fully compostable in 60 days, plastic 2.0 biodegrades at the same speed as an apple core. It does not require specialized composting chambers or any other extreme environments, which other supposedly "biodegradable" plastics need.

This Could Be the Most Important Materials Advancement in 100 Years

The company that owns the patents has already entered the market, and it's done so using one of today's fastest-growing segments in the single-use food service world: the single-use coffee pod.

Yes, the same annoying little container that I mentioned earlier will be the battleground on which plastic 2.0 makes its presence felt. The reason is simple. Of all single-use food containers out there, the coffee pod has to undergo the most extreme conditions in terms of pressure and heat.

Without being just as tough and long-lasting as plastic, plastic 2.0 would have no chance.

Tackling the coffee pod is therefore not just a way into one of the fastest-growing segments in the market (averaging over 8% year-over-year growth), but it's also the most dramatic proof of concept the company could execute.

The company with a potential solution to our plastic problem, on the other hand, is valued at barely $50 million.

You see where I'm going with this?

This could be the biggest investment opportunity of your life.

Learn more about it before it runs away.