I’ve said it before, and I’ll say it again: the “Death of the iPhone” is right around the corner... and investors who play it right are going to make an absolute killing in the stock market.

Not to mention, the technology is going to completely change the world as we know it.

When I first made this seemingly "ridiculous" prediction about two years ago, I was widely ignored. The iPhone was posting record sales at the time, and Apple’s stock was summiting the top of the technology food chain.

In fact, you don’t even need the qualifier: Apple had reached the top of the entire corporate food chain by posting the single most profitable quarter of any public company in history.

Yet while the mainstream media machine was busy celebrating the company’s incredible quarter, I was calling for “peak iPhone” and telling investors NOT to buy Apple’s stock directly after record earnings.

This was in February 2015 when Apple was trading at ~$115 a share. Fast-forward a year, and the company was down to $94.00. By October 2016, Apple was posting its first annual sales decline in well over a decade.

Disruption Stops for Nothing

Of course, this wasn’t the end of Apple or its stock (I later recommended buying Apple on the dip), but it was one of the earliest indicators that the age of what Wired was calling the “Unstoppable, Unbeatable iPhone” would eventually come to an end.

As much as I hate to humble-brag, I’m close to certain that I was the first to coin the terms “Death of the iPhone” and “iPhone Killer.” Heck, if you Google either phrase, my name even ranks as the number one result.

At the very least, I was miles ahead of this Business Insider headline:

“Apple is preparing for the death of the iPhone”

And this one from The Street:

“Apple Could Reveal Its Own iPhone Killer, Top Analyst Hints”

Hopefully that should give me at least some level of authority on the topic, but regardless of what I've already predicted, the facts today speak for themselves.

And if it hasn’t become obvious enough by now what the “iPhone Killer” is going to look like, Google’s latest software release gave us some further clarity earlier this week.

Early Stages of the iPhone Killer

According to a web post from Google, the platform uses three key technologies to integrate virtual content with the real world:

The move comes not long after Apple’s release of its ARKit, the equivalent of ARCore but for iOS devices. So far, the developer community has been doing some pretty incredible things with Apple’s platform.

Of course, you can’t truly experience what these applications look like in a still frame, but it should be enough to get your imagination running.

Arise plays as a three-dimensional puzzle that you can drop into an open real-world environment. Players move around the virtual world with a 360-degree perspective and connect gaps for Arise’s virtual protagonist to walk across. 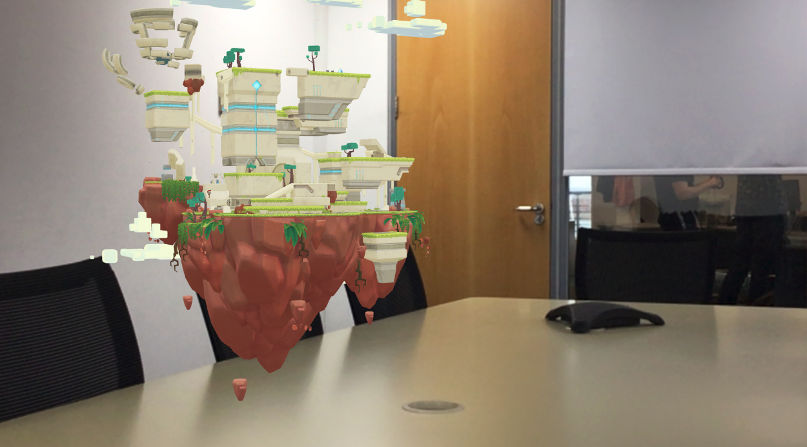 There’s also Ikea’s new AR app, which lets potential customers visualize how furniture would look in their homes before purchasing it.

And Kabaq’s food ordering app, which renders realistic food models so diners won’t have to rely on a menu description to see how their meal is going to look on their plate.

Personally, I’m waiting to see a dating app that displays marital status over everyone’s shoulder. The Irish had a great idea with the Claddagh ring, but an AR app is going to take that idea to the next level.

Despite all this progress on the software side, AR still faces one last hurdle before it can truly go mainstream, and that’s the challenge of what I call “expanding the window.”

The core disadvantage of today’s AR platforms is that they are tailored to our smartphones. This is the best way to get the market rolling because everyone has one, but it limits your “window” into the virtual world by the size of your screen.

Even with an iPad, today’s AR applications are rather awkward to deal with. Holding our devices out in front of us isn’t exactly the ideal form of displaying a mixed reality.

The most obvious way to fix this problem and expand the window is through a pair of AR glasses. I would bet the farm that we’ll see one of these devices hit the mainstream within the next three to five years.

Microsoft, Google, and Apple have all been confirmed to be working on different variations of this kind of device. It’s still not certain who will ultimately prevail, but it’s clear this is the direction that consumer electronics is moving.

But as long as I’ve been saying that the Death of the iPhone is coming, I’ve also been shouting from the rooftops that Big Tech isn’t the way to play this trend. Instead, investors are going to want to look at the picks and shovels of AR.

That is, you’re going to want to invest in the suppliers behind the curtain: the companies producing the displays, cameras, processing units, and so on to make augmented reality, well, a reality.

We’ve been covering this trend for nearly two years and will continue to do so as long as we see an opportunity for investors to profit. If you want to join us and our community of nearly 20,000 investors today, this is a great place to start.