Unless entitlements are substantially reformed, the U.S. will likely default on its debt; not in conventional ways, but via inflation, currency devaluation and low to negative real interest rates.

What a crappy day.

The sun is shining, the birds are singing, Tiger lost the Masters, my portfolio went up another 10% last month...

I should be happy.

I just parked my car at the Belvedere in downtown Baltimore. I took the shortcut through the alley to the converted carriage house — formerly owned by the widow of Alex Brown — which is the home office of Angel Publishing.

Avoiding the rats, trash, and little bags that crack comes in, I almost managed to reach the safety of the back door when I came across a man, six-foot-four and thin as a drain pipe, leaning smugly against a hoopty Maxima.

“Hammer,” he barked out of the corner of his mouth.

He had pulled up his white t-shirt to his chest and was rubbing his flat belly with his left hand. He feigned boredom.

“Silky,” I said with a nod and stretched my key toward the steel door that leads to the back stairs of the office — and a quick escape.

This pulled me up, and I faced him. “Five dollars?” I asked incredulously. “You used to ask me for a quarter.”

“You've been avoiding me. Besides, inflation.”

“Inflation? What do you know of inflation?”

“I know certain businessmen will now only take the Canadian Loonie for international transactions.” 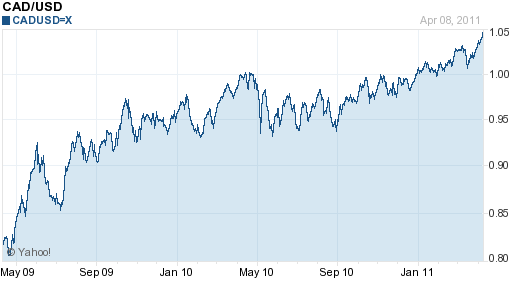 “The numbers I've seen is that the Fed will have to reinvest some $750 billion a year in maturing principle payments. This is equal to 75% of the new two- and ten-year notes to fund the U.S. budget deficits for the next two years.”

“Did you hear that Bill Gross over at the Pimco Bond Fund (TRF) is not only out of buying U.S. paper, but is actively shorting it? In March, he bet $7.1 billion against the Fed. And on top of that, a full third of his fund is in cash... which means investors are paying Gross to sit on their money.”

“Indeed. So where should we put our money now, Silk?”

“Well you know, my good man,” Silky replied, “the place to be is in gold.”

He went on to explain that back in 2006, John Hathaway of the Tocqueville Gold Fund wrote:

In the bleak days of 1935, the market cap of above-ground gold equaled 15 percent of U.S. financial assets.

In 1980, when bonds were dubbed ‘certificates of confiscation’ and good-quality equities traded at six times earnings and 6 percent dividend yields, that same percentage was 29 percent.

In today’s carefree world, that percentage is only 3 percent. The price of gold can double or triple in the absence of catastrophic outcomes simply as more investors attempt to position the exchange-traded fund.

“It looks like gold could go much higher, just based on supply,” I said as I watched a man toss boxes in a dumpster a few doors down.

“Yup. Gold just hit a new all-time high overnight at $1,478. The junior miners are getting close to an all-time high... 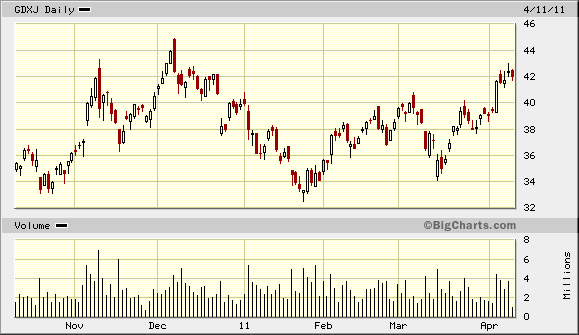 “You got that five dollars?”

“Sure,” I said, pulling a grubby little note out of my pocket.

“You keep the change.”