Is Gold Ready for an Upswing?

All indicators show gold is coming back.

As powerful as an airplane’s engines may be, the airship can be knocked around pretty severely when flying through air turbulence, in some cases dropping a hundred feet or more in a flash.

High flying gold has likewise encountered violent turbulence that has not only caused its altitude to fall and rise spastically, but may have also caused some serious structural damage to its wings.

All eyes keep looking to gold’s engines. Do they still have enough power to keep gold on its upward trajectory?

For years, gold’s engines were firing smooth and steady, lifting gold higher and higher. Low interest rates, central bank stimulus, credit rating downgrades and expectations of high inflation drove gold steadily upward from $750 an ounce in 2008 to $1925 in 2011, a rise of 156% from trough to peak in just 3 years.

But during the last 1.5 years, gold has been flying through some pretty wicked turbulence. Inflation has not materialized and stock markets have stolen gold’s thunder, not to mention its investors.

And after the hearing came more turbulence from a myriad of conflicting reviews and analyses ranging from “The Fed Keeps Bond Buying Alive” to “The Fed May Ease Bond Buying Soon” to “The Fed Waits For More Economic Data”.

It may be just a lot of hot air, but this can be useful to things that fly. Just as eagles conserve their energy by using columns of rising hot air to lift them higher, the consensus expectation is that the recent hot air blowing from government offices, government officials and market analysts can likewise provide gold some sorely needed upward lift.

The benefit of all this talk over bond purchase tapering is to knock out of contention two chief rivals of gold: stocks and bonds. Gold has already been hit enough recently, while stocks and bonds have not had their corrections yet. Any reduction in Fed bond buying will most likely take a bigger toll on stocks and bonds than it would on gold, with investments reversing direction and making their way back into the “metal of the sun”.

A Bloomberg survey showed 12 analysts expect gold prices to rise this week, while 9 expect them to fall, with 8 simply shrugging their shoulders. This is the most bullish they have been in 4 weeks.

Over the immediate-term, though, Ole Hansen, vice president at Saxo Bank, sees gold remaining choppy with no definitive direction just yet. “The bears have not seen any evidence of them being wrong, while the bulls got a bit of safe haven and on balance a rather dovish Bernanke,” he assessed to Bloomberg.

“Bottom line, we are still in dangerous territory having failed so far to move back above $1,414. The double bottom which is now in the making might give technical traders some comfort, but for it to be confirmed we ideally need to see a $1,432 print, so it's not yet something to lean against.”

Since Mr. Bernanke repeatedly stressed at his hearing that any decision by the Federal Reserve to decrease, suspend or end the bond buying program would be dependant upon further incoming economic data, we can likewise expect the turbulence around the gold price to not decrease, suspend nor end for at least a little while longer.

But has all this uncertainty killed gold’s upward trajectory? Or are gold’s engines still powerful enough to keep it climbing?

Even while the world’s largest gold ETF - the SPDR Gold Trust (NYSEArca:GLD) lost another 19.8 tons of gold last week due to redemptions with its total gold holding falling to its lowest level in over four years, the gold price stayed within its range, prompting financial services provider Macquarie Group to conclude to Reuters:

“Given the extent of these outflows - equivalent to mine production from all of Africa and South America during the same period - that the gold price hasn't completely collapsed is testament to strong retail demand for jewellery, coins and bars.”

This physical demand is growing by the month. Wolfgang Wrzesniok-Rossbach, the chief executive officer of Germany’s Degussa informed Bloomberg that while physical gold purchases outpaced sales by 4 to 1 in the first quarter of this year, over the past month purchases have outnumbered sales 9 to 1. And sales this month are on pace to double the first-quarter average.

Central banks for their part can’t resist these bargain basement prices either, and are expected to buy from 450 to 550 tons in 2013 as projected by the World Gold Council.

What these flows are telling us – outflows from gold funds and ETF’s, as well as inflows into bullion and coins – is that the recent plunge in the gold price is paper-driven. The sellers are mostly institutional, such as hedge funds and investment banks, lured away by greener pastures on the equity side of the fence. These short-term investors jump the fence between the two markets frequently, and just a little bit of pro-gold news can send them jumping back the other way just as quickly.

Adding more thrust to gold’s engines are the still ultra-low interest rates. Even if the Fed reduces bond purchases later this year, interest rates will still remain at all-time lows until at least 2015, not just in the U.S. but globally as well, ultimately driving gold higher as currencies slowly fall behind inflation.

“Gold should still be in demand as an alternative currency,” Daniel Briesemann, a commodities analyst at Commerzbank AG in Frankfurt predicted to Bloomberg. “The quantitative easing by central banks should lead to a depreciation in rates for major currencies and in the end should also lead to some inflation concerns, although this is not an issue at the moment.”

Inflation may be light at present, but it does not have to be rampant to lift gold. It just needs to rise about 1% more on average until it is just slightly above government interest rates. This creates negative real interest rates which cause currencies to slowly fall behind rising consumer prices, further boosting gold’s strength versus fiat money.

While the engines powering gold are still fundamentally sound, we can expect turbulence to continue tossing its price up and down. Gold now being below all key moving averages – the 50, 100, 150 and 200 – might portend a revisitation of the low $1,300’s.

Other technicals, though, are telling us that any drop from here should be temporary. The chart below shows the current development of a nice double bottom (red), a formation which has repeatedly preceded market rises, especially at the end of the 2006, 2008 and 2009-10 corrections, and yet again in 2012.

The MACD (blue), for its part, serves as a further indication that gold is getting ready to soar higher.

And finally, the current time of year regularly sees rising prices toward year’s end. Since 2005, gold has risen higher from mid-year lows (green) each and every year. 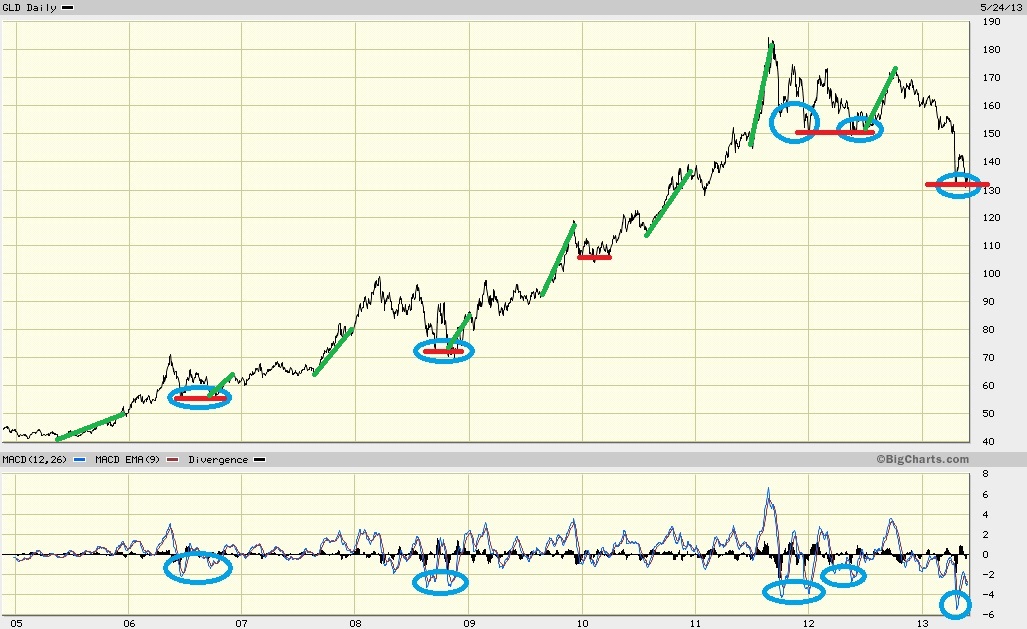 Silver Price Rebound
Silver prices have fallen on stock market highs and fears of dropping demand. Is this trend set to reverse?
Easing Stimulus and Gold Prices
John Williams, the President of the San Francisco Federal Reserve Bank, indicated the Fed could begin slowing stimulus as soon as this summer...
George Soros Disappointed in Gold
George Soros thinks gold can be sold off just as easily as anything else. And that's what prompted him to cut his gold ETF holdings just before April's crash...
Buffett's Envy: 50% Annual Returns, Guaranteed
Warren Buffett once told investors at an annual shareholder meeting, "...it's a huge structural advantage not to have a lot of money. I think I could make you 50% a year on $1 million. No, I know I could. I guarantee that."