An Undervalued Gold Producer Working Across the Border - Part 1

Over the past several weeks and months, the market has really beat up a lot of junior gold stocks. Much of the downward pressure can be attributed to stagnant gold prices. After a hearty run up to $1,032.80 per ounce in March, spot gold prices corrected, shaking out a lot of the hard money. However, with the impending bank crisis in the United States and continued trouble throughout the Middle East, gold is starting to regain its luster as a hedge against disaster. And this makes for a perfect time to jump back into junior gold stocks.

Over the next two days I am going to report on one of my favorite Canadian gold stocks mining in Mexico. The company's stock has fallen significantly (I believe too much) over the past several weeks, and the stock looks like a great buy a current levels. So without further delay, let's get started.

Over the past several months, Rochester Resources (TSX-V: RCT) has assembled a very attractive portfolio of four contiguous, high-grade gold/silver properties in Nayarit, Mexico. These properties cover a total of over 24,000 hectares of mineral prospective land in the Sierra Madre Occidental range, the largest epithermal precious metal region in the world and host to the majority of Mexico's gold and silver deposits.

The company has also initiated small-scale gold and silver production at one of its projects, with two mines feeding a processing facility that is currently operating at 200 tonnes of ore per day. Production at this facility is expected to increase 50% within the next few weeks.

Meanwhile, Rochester is actively exploring its other Mexican properties and has identified a total of 36 mineralized veins to date across its large land position.

Overall, Rochester Resources is a fairy tale-type deal . . . minus, of course, wicked witches, talking beasts and magical enchantments. My point is that once this story plays itself it out, investors are sure to live happily ever after.

In this report we will explore the investment highlights of Rochester, with a focus on the company's highly prospective Mexican mineral properties and future growth in gold and silver production and cash-flow reveune. But before we delve too deep into the details, let me give you a very brief history of Rochester.

Rochester Resources Mining: In the beginning...

Every story starts somewhere. Rochester's began on August 25, 2005, when the company was formed by a small group of savvy Mexican and Canadian investors and geologists.

Several months later, on December 1, 2006, Rochester Resources effectively acquired a 100% interest in the Mina Real epithermal gold/silver project located near the capital city of Tepic in the state of Nayarit, Mexico, through its now wholly-owned subsidiary Mina Real Mexico SA de CV. This is when things started really moving.

Subsequently, on March 12, 2007, the company acquired a 70% interest in the 3,823-hecate Santa Fe gold/silver property located immediately east of Mina Real. And the most recent property acquisition, occurring on February 12, 2008, increased the size of Rochester's land holdings by over 100% bringing the company's total property package to 24,368 hectares.

The mining history of the Mina Real property is not well documented. However, older local residents living near the property say that amateur mining was conducted during the 1940s and 1950s. Some also say that earlier workings date back to the 1920s.

Prior to its ownership by Rochester, Dr. Alfredo Parra Davila (founder and current president and CEO of Rochester Resources) and his sons explored the Mina Real property via rustic boot-and-hammer-type prospecting. They would often ride mule-back for many miles into the mountain forests and return with heavy loads of rock samples. Later, Dr. Parra Davila personally funded the construction of access roads to historic mine workings and drift development into one of the veins on the Mina Real property.

These three areas host five major vein systems named Florida-Florida North, El Puerto 1, El Puerto 2, Tajos Cuates and Tajos Cuates 1, as well as six recently discovered systems that are scattered through the property's land. The company has also recently reported that it has located several outcrops at Mina Real indicating the existence of additional veins that were previously undiscovered.

Below you will see the three main areas outlined in blue and mineralized veins in red. 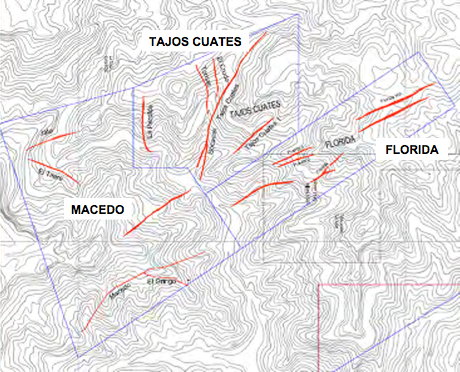 A 4,000-meter Phase 1 diamond drill program has recently been initiated at the Mina Real project. There will be 2,000 meters of drilling at the Florida North target to identify the continuation of the system and 2,000 meters at the Tajos Cuates target to further delineate the lateral and vertical extent of the system.

Florida and Tajos Cuates are the main areas of activity at Mina Real for Rochester. These areas each host one producing underground mine, and Florida is the site of the company's production mill.

Florida Mine, Area, and Production Mill

The Florida mine site and the surrounding Florida exploration project were Rochester's first priority in exploration and development dating back to the middle of 2006. A tremendous amount of work has been accomplished in this short time.

The Florida mine is comprised of a triple vein structure that, to date, appears to have a vertical mineralized continuity of over 300 meters. With the current exploration program the company is in the process of proving the vertical continuity to greater than 350 meters.

Extensive drift development has taken place at the Florida triple vein structure, and a clearer understanding of the ore body has been gained through a theoretical geological model developed over the past several years by Dr. Alfredo Parra.

To date, independent assays of channel samples taken every two meters from 775 meters of drift development mining have produced an average grade of 12.1 g/t of gold and about 209 g/t of silver. Higher grades of up to 30 g/t gold were also subsequently reported in ramping to lower levels.

The average grade of these samples is significantly higher than the average grade previously announced from the 2005 bulk sample at the Florida mine of 4,400 tonnes, which produced an average mill head grade of 8.3 g/t of gold and 165 g/t of silver.

Rochester recently completed 600 meters of drift development at Florida and discovered four new gold/silver veins on the Florida NW area. The most significant of these new veins is called La Vibora. So far, the La Vibora Vein has been traced on surface for 200 meters. A series of four trenches have been completed to date, with all encountering strong mineralization. Of particular note is trench 2 which uncovered 1.9 meters grading 35.26 g/t gold and 297.63 g/t silver including 0.70 meters grading 93.1 g/t gold and 500 g/t silver. Overall, the four trenches have an average vein width of 2.08 meters grading 16.5 g/t gold and 174 g/t silver.

Three other veins have been discovered including the Vuiruco Vein, a vein parallel to La Vibora and perpendicular with Florida 4, where the width of the vein intersected is reported at 5.9 meters. Additional follow up to these results is ongoing.

Data from this development program will provide bulk sample-like information and assist in generating an NI 43-101 compliant reserve report while at the same time providing feed for the mill.

The company is also in the middle of a 2,000-meter drilling campaign at the Florida North target to identify the continuation of the system. Assay results from the this drilling will be out within the next few months.

Below you'll find two aerial views of the Florida mine site. In the bottom photograph you'll get a closer look and can see the adit entrances.

Ore from the Florida mine is being trucked to the Mina Real production facility, which was built and commissioned in the summer of 2007. The Mina Real facility is currently processing about 200 tonnes of ore per day. The revenue from this small-scale operation has yielded significant cash flow for Rochester since August 2007, recently resulting in monthly sales in excess of one million dollars.

A second back-up power generator has recently been put into operation, which now provides the power capacity to operate when service from the main grid is disrupted. Downtime due to unforeseen infrastructure malfunctions will now be limited. Rochester has also completed the construction of a tailings pond and upgraded the road access to the mine and exploration sites.

A third, larger ball mill and an additional secondary crusher have recently arrived at the mill. These additions will enable the company to increase production at the Mina Real facility by 50% to 300 tonnes per day. Foundations for the mill and power supply are being integrated and the company is expecting to have this equipment operational by mid-2008.

The recovery rate for gold at the Mina Real mill is currently about 91%, which is a good number for Rochester's type of operation. The silver recovery rate, on the other hand, has only averaged between 41% and 46%. However, the company expects to increase its silver recovery to greater than 90% in the next few months.

Once Rochester ramps up the recovery rate for silver, the mill will begin receiving even higher-grade material from the Tajos Cuates system.

Below you'll see some photographs from the Mina Real processing facility. The first is of the conveyor carrying crushed ore to a storage tank. The next is of the three ball mills. Last you'll see the tanks filled with agitators and thickeners used to separate the gold and silver from the rock.

There are several other photographs of the Mina Real processing facility to be seen by clicking the following link: http://www.rochesterresourcesltd.com/medSlideshow.aspx

To be continued tomorrow...