The big data point from yesterday was that Chinese trade is falling. Exports fell 18.1% from last year, which moved the trade balance negative.

Think of that. China, the great global export machine, now imports more than it exports. What a difference five years makes.

No wonder they are trying to distract their population by stirring up trouble with Japan...

As you can imagine, Wall Street took one look at this news and sold off every commodity you can think off. Oil fell, copper fell, nickel fell. All the major indexes were off. My screens were bleeding red from the Dow to the NASDAQ to the FTSE, Nikkei, and Hong Kong.

The only item that was up was the barbarous relic, gold (and fuel cells).

Here is the ten-year chart for the gold ETF GLD, which tracks the gold price. Each candlestick represents a month. As you can see, the price of gold came down to $1,180 per oz. and then bounced twice to form a double bottom. It is now going back up. 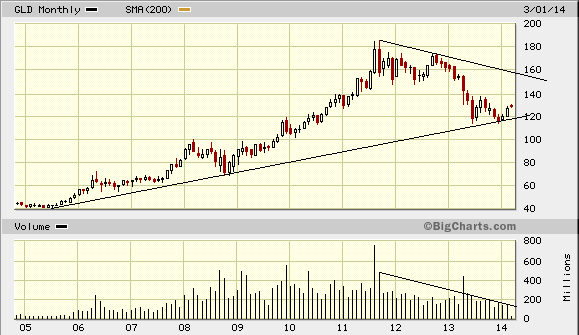 The two slanting lines are called trend lines. They smooth out the chart and give you an idea of where it is heading.

The trend line that connects the lows is bullish, as each low is higher than the one before it. Gold has been in a bull market for about 14 years now.

However, over the past three years, since gold topped out in 2011, it has been in a short-term bear market within the longer-term bull market. You can tell this by the downward-slanting trend line.

What this tells us is that the price of gold will likely bounce between these two trend lines over the next year. This is called a pennant formation because it looks like one of those football pennants you had on your wall as a kid.

The moves will become smaller until the trend lines cross and the price of gold has to break out one way or the other. That said, we don't have to worry about that until next year. Right now, the next move is up about $200 an ounce.

To trade this gold pattern, you don't want to by gold — you want to buy the junior gold miners. I like Allied Nevada because I made a killing on it after I bought it in 2009. 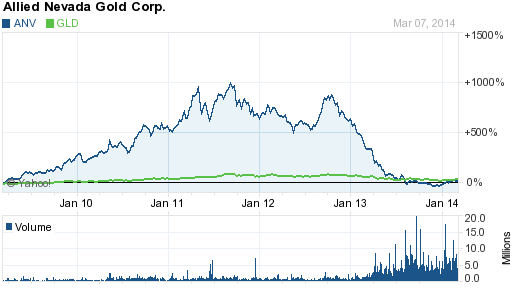 Right now, after a moonshot of a round trip, the company is trading at 0.75 times book value and just two times sales. It has plenty of cash and some debt, but it's still a good proxy for the next leg up in gold.

As you can see by the chart above, when gold goes up 33%, ANV goes up 1,000%. But the small gold miners also fall much further when things go bad. ANV is down from $40 and now trades just north of $5.

With the steady stream of bad news germinating from emerging markets as well as more developed markets like the BRICs, it's a strong bet that money will be flowing into safe havens like gold. And when gold goes up, the junior miners go up much further and faster.

If you are looking for an ETF, the Market Vectors Junior Gold Miners (NASDAQ: GDXJ) works as well.