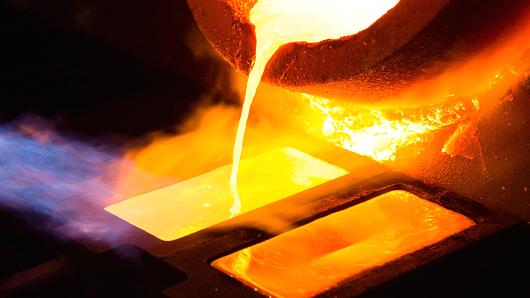 The gold community now needs to consider the distinct possibility that gold will trade for as low as $350 an ounce.

This is what Claude Erb recently announced to the world.

Who is Claude Erb?

He’s a former commodities manager at TCW Group, and co-author of a mid-2012 study that forecast a plunging gold price.

Erb maintains that the fair value of gold right now is $825, according to his formula which was published in his 2012 study. But he notes that as gold continues to plunge, the value will actually overshoot where it should be, and continue dropping below fair market value.

Crap, I hope not!

Not that I”m sitting on a ton of gold, but certainly the limited amount of yellow metal I do have is not something I want to watch lose that much value.

Of course, I’m not overly concerned. After all, as Mark Hulbert recently noted …

Erb and Harvey’s study does not lend itself to short- or even intermediate-term market-timing calls. It would not be inconsistent with their research for gold to now stage a powerful rally, and/or to remain above fair value for quite some time. Erb points out that this is just the same as it is with equities, which, according to the formula championed by Yale professor Robert Shiller, have been overvalued at least since the early 1990s.

Hulbert goes on to say …

t’s also worth pointing out that Erb and Harvey’s research contains some good news for gold bugs: Over the very long term, gold does keep up with inflation. However, this very long term is measured in terms of many decades, if not centuries.

So what should gold investors do?

Good question. And if anyone claims to know the answer, he or she is lying or is simply misguided. Besides, how much of a stretch is it to make a prediction here?

Gold will either stagnate, increase is value, or plummet. But I suspect for most serious gold bugs, none of this matters. For them, gold will always be used as a hedge against disaster. And despite the dwindling numbers of gold bulls, this still does give it a value that is a bit hard to quantify.

For me, I’m not rushing out to sell my gold. After all, I got most of it back in 1998 after being exposed to Murray Rothbard, who once said, “Gold was not selected arbitrarily by governments to be the monetary standard. Gold had developed for many centuries on the free market as the best money; as the commodity providing the most stable and desirable monetary medium.”

That being said, I didn’t shy away from unloading a sizable portion after gold crossed $1,000. But I still have a small amount left. I’m not sure, however, if I’m holding on to it because I still believe in gold as being the best hedge against inflation or I’m holding on to it for sentimental reasons.

The truth is, when it comes to any kind of protection against shaky economic conditions, I maintain that the best security is that which allows you to continue living a comfortable life, even while the rest of the world is swimming upstream against the failures of central planning and fiat currencies.

In such a world, I’d rather have solar panels, healthy soil, access to clean water, firearms, and people around me whom I can trust. Gold? Well, I’m not completely convinced that enough folks would be willing to trade much of value for it.