This is the time when all the Wall Street houses come out with their yearly predictions for the markets.

It’s also the time when Wealth Daily does the same.

Last week, I came out with Wealth Daily’s oil forecast.

Whether or not it ends the year at that level, I don’t know. But at some point in 2012, I believe oil will hit $125 based on the technical pattern I’m seeing in the oil chart. And that will be the high for the year.

But before I get to that, let me tell you what Wall Street houses Morgan Stanley and Goldman Sachs are predicting for the yellow metal...

Morgan Stanley is predicting gold will be the best-performing commodity in 2012 — and may make a new record high as investors look to secure their wealth against European uncertainty and slowing economic growth.

Their price target for gold in this year is $1,940 an ounce:

We’re staying overweight on commodities as a rebound in demand revives speculation of shortages, with gold a favorite for 2012 as investors seek a hedge against Europe’s debt crisis.

Demand for gold strengthened most of last year as Europe’s debt crisis widened and the U.S. Federal Reserve pledged to keep interest rates near zero until at least mid-2013. Low interest rates increase the appeal of bullion because they generally reduce the prospect of returns on bonds.

Our view on gold is driven by our view on underlying real interest rates. It is the sharp drop in price that makes it more attractive.

One of the things I do to gauge the gold market is I go to coin and bullion dealers.

Before coming to the office today, I stopped in to see my favorite coin and bullion dealer. And I can tell you business in his shop is still booming.

Then came this little tidbit over the wire...

Hong Kong reported this past Wednesday that their gold imports reached record heights this month as investors rushed to the precious metal before the Luna New Year — a weeklong holiday beginning on January 23 — in order to "hedge against financial turmoil."

Demand for gold is climbing in China as investors seek to protect their wealth against slumping property prices and equity markets amid an inflation rate above 4 percent. The nation overtook India in the third quarter as the largest gold jewelry market, according to the World Gold Council.

I usually read Wall Street predictions with a skeptical and suspicious eye.

But I actually think they’re spot-on with their call — especially after reading the Chinese story.

And the chart of gold suggests they’re right. 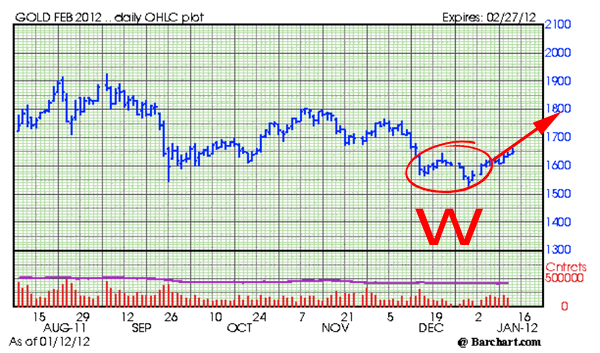 Gold is setting up a double-bottom formation after selling off late last year. 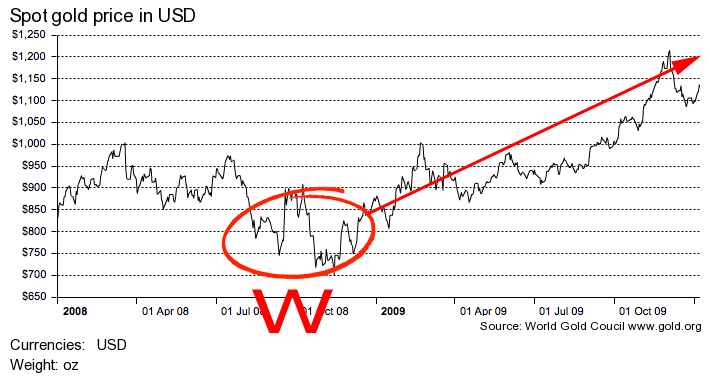 Gold broke out perfectly from the “W” formation… and hit the precise price target is was supposed to hit.

The current chart suggests a breakout to $1,950 — almost exactly what Goldman is predicting.