Slovakiuh-oh: How to Trade Gold Now

Suddenly, everyone is an expert on all things gold and silver.

They’re all seasoned economic pundits, dissecting the end of the risk aversion trade to the dollar and all the reasons that gold and silver are the place to be.

At least 12 people have told me they absolutely “knew” gold would run higher from here...

Silver? A no-brainer. The dollar? It’s coming down for sure.

My son’s kindergarten teacher, the cro-magnon security guard at the school, the Arab guy who makes my turkey sandwiches — they followed billionaire John Paulson’s gold trade and told me to buy when it popped to $1,850 an ounce. They lost thousands.

Paulson's the guy that made billions on the housing collapse. But as the saying goes, past performance does not equal future gain.

“Stop crowding the trade thinking you know what you’re talking about,” is what I angrily thought about saying to these people. (I decided to hold my tongue. Some of these folks were officers with 45s on their belts.)

On my way to pick up last-minute Tony Bennett tickets last night, the taxi driver, Amir, asked me where gold is heading.

“You might have better luck playing a possible bottoming out here around $1,600, depending on the euro situation,” I said as I darted from the cab before having to explain further. All I wanted was 10 minutes alone with no one talking about gold and silver, and I couldn't even get that.

But it got me thinking: How could a smart, respected billionaire like Paulson screw up the gold trade and lose so much money?

Calling that top was child’s play on an overextended move. Then again, maybe Paulson's not reading Wealth Daily.

It should have been as obvious to Paulson as it was to me that gold was topping out after an overextended run.

Back in August, I reminded investors we have to be realistic with gold when I wrote an article about hedging gold prices:

The herd is far too bullish. Gold margins could get hiked again. It's technically overdue for a significant pullback on overextended conditions. Just look at the Bollinger Bands, RSI, and MACD reads. Gold has rallied too far, too fast. 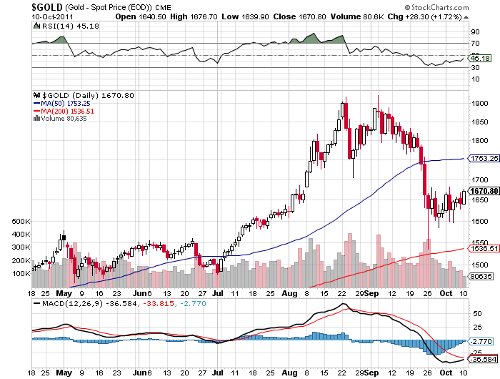 The Slovakia vote is not the end-all-be-all vote.

Yes, it throws Europe out of whack for a bit. However, a second vote maybe this week — or even new information at the October 23rd eurozone summit — could still be obtained.

Sixteen countries have already approved a bill to strengthen the European rescue fund, but Slovakia has been holding out. And in order for the measure to go through, a unanimous vote of euro-using countries must approve it.

If Slovakia were to vote "no" a second time, we could see the debt issue complicated further.

So as we wait for Slovakia to make up its mind, here are some bullish cases for gold upside...

The dollar has overextended its run at the latest peak. Anyone that wanted to buy the dollar has already done so. 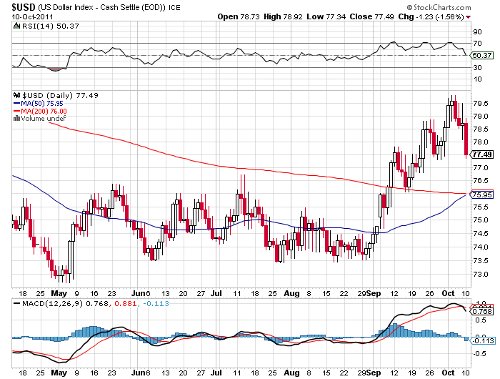 The “risk on” trade is back on the table, depending on Slovakia.

And we're not the only ones calling for a run on gold: Credit Suisse just upped its 2012 gold forecast to $1,850. Morgan Stanley expects the metal to run to $2,200 sometime in 2012. And one of this year's most successful hedge funds, Duet Commodities, is looking for $2,000 gold in the next three months.

Buy gold on the dips — and short it every time it overextends itself.

If gold can break out of its consolidation pattern to the upside, we could see a return to $1,700 in no time — maybe even $1,900 before the year lets out.

One way is to play it with option straddles. For example, you'd buy a straddle in the case of Slovakian-led downside in gold.

Or as Andrew Mickey has pointed out, take a look at oversold junior resource stocks, which haven't run as they should. We expect that to change, though. Fundamentals have never looked so good.

You're being handed a gift with gold this low...

Don't miss the opportunities as they knock.