Gold Will Fly on QE3

For the past month or so, I've been writing that gold was in a triangle formation and was going to break out — either up or down...

The good news for those of us who are long gold is that it moved to the upside.

The downtrend is over, and it looks like we have room to run back to $1,800 an ounce over the next quarter. 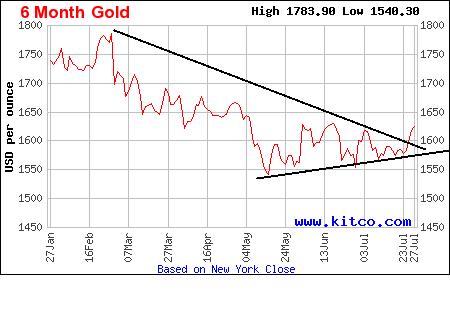 Gold is moving due to the possibility of more money printing — or QE3, as it is known on Wall Street — with expectations that it could be announced in the next few days.

The members of central banks in Europe and the United States are meeting this week.

As much as I hate meetings, these will be lots of fun. The top financial brains in the world will be looking at more creative ways to spend their way out of a debt crisis.

If they were smart, the European Central Bank President (ECBP) Mario Draghi and the U.S. Federal Reserve Head (FH) Ben Bernanke would put 3% down on a $20 trillion “Bordeaux Colossus” over at Diamonte Ranch...

They could take out four or five mortgages, a couple of trillion-dollar HELOCs, and then forget to pay.

You could see Ben before Congress going, “No, I'm not paying. Sorry.”

Then Mario and Ben could squat for five or six years, mortgage free. Think of the savings!

What is going to happen is that Draghi will continue to jawbone the market in the hopes that the German judiciary will go along with him in the end and bailout Spain, Greece, Italy, and Portugal.

It should be noted that only 28% of Germans support this view. If it goes to referendum, it will fail.

Last week Draghi gave a boost to the market by pledging to do whatever it takes to preserve the euro.

The market now expects a massive bailout announcement for the Eurozone on Thursday.

Back in the United States, the market expects Bernanke to stall with style.

He'll say he will extend the low interest rates out another year or two...

Here's a roundup via the Wall Street Journal:

— J.P. MORGAN: There's a less-than-50% chance the Fed will ease at its meeting, says strategist Kevin Hebner, who cites the need for additional labor market data. But he does see action at the September meeting as more likely. Mr. Hebner says he expects that when the Fed does ease, it will announce $500 billion in new asset purchases, likely focused on agency mortgage-backed securities.

— CAPITAL ECONOMICS: Recent U.S. economic data haven't been weak enough to prompt Fed easing at this week's policy meeting, says economist Paul Dales. Capital Economics expects the U.S. economy to grow 2% this year, which means that the 1.5% GDP second-quarter growth is only slightly below its potential and that the case for further stimulus is "not clear cut."

— SOCIETE GENERALE: Economists expect the Fed to wait until September before launching QE3 since the central bank just announced in June the extension of "Operation Twist," its program to buy longer-maturity Treasurys to lower long-term interest rates. At this week's meeting, the Fed may extend its time reference for keeping low interest rates beyond late 2014, says head of research Stephen Gallagher. 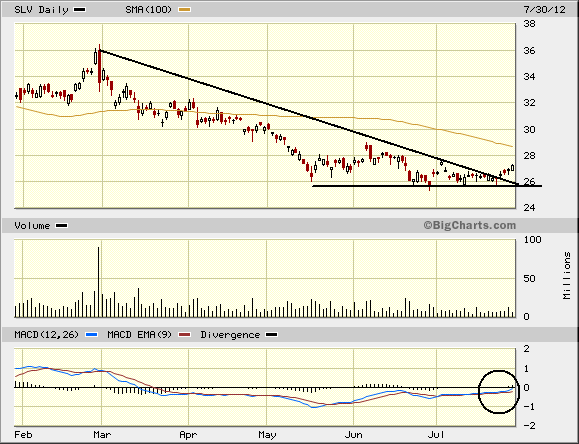 Platinum has bottomed out, though it is still lagging its peers on a breakout.

I like platinum as the most undervalued of the precious metals. The miners are particularly undervalued. 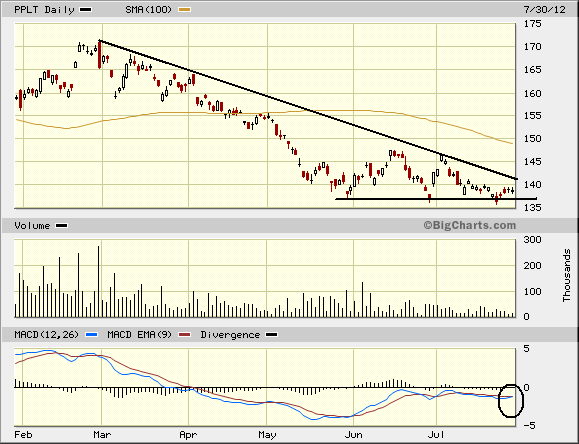 Over on the energy side, take a look at this five-year natural gas chart...

All the sellers have been crushed out of the natural gas market. Any positive news will launch NG prices.

Last week I put a price target over $10. It might take a year, but you'd wait a bit to triple your money, no? 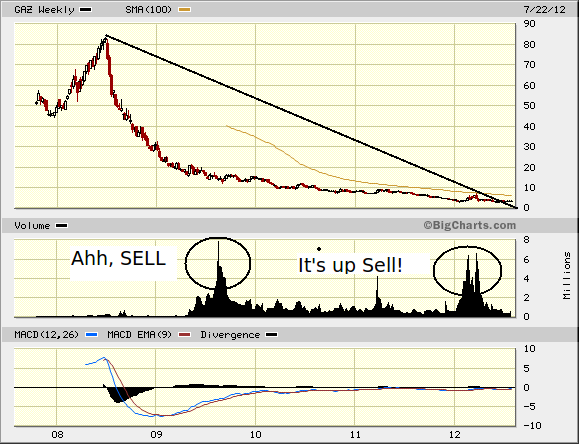 Oil is a mess.

After the lower highs and lower lows, it seemed as if the price of oil was going to fall off the table... but we've rallied for the past few months.

I'm still bearish, but this chart is inconclusive: 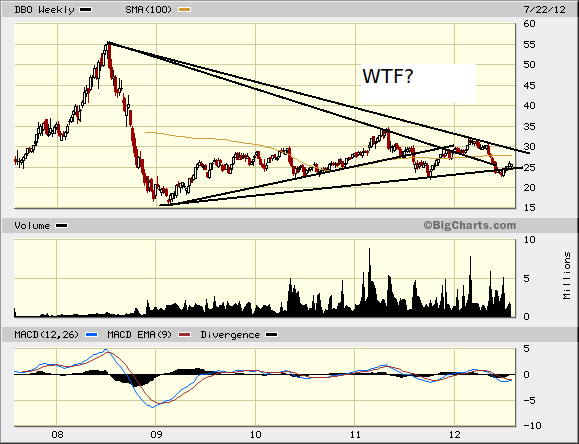 (In my options trading service, I'm looking to enter on a long-term trade that shorts oil and goes long nat gas.)

There is also a percentage of traders that speculates the U.S. and Europe will coordinate a bazooka-blast, money-printing spendapalooza this week.

If past is prologue, the bureaucrats will toss us traders a well-gnawed bone...

And the market will drop back to the bottom of its range. 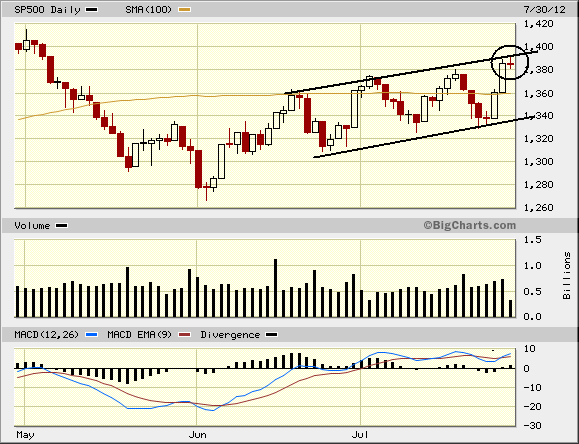 Either way, you should own some gold, silver, and platinum.