Gold and the Iraqi Dinar Revaluation

In a move that surprised economists the world over, the Central Bank of Iraq purchased 36 tons of gold valued at some $1.52 billion this month “to help stabilize the Iraqi dinar against foreign currencies,” the bank explained.

That represents a larger amount of gold than most nations purchased in all of 2013, moving Iraq into 15th place in annual purchases on just that one purchase alone.

But anyone following the recent history of Iraq’s dinar is left scratching their head, as this month’s purchase more than doubled Iraq’s gold reserves from 27 tons to 63 tons for an increase of over 133 percent. Despite transacting the 15th largest annual gold purchase in the world, there was absolutely no move in the value of Iraq’s money – holding steady at approximately 1,165 dinars per USD, where it has been for more than two years and three months. 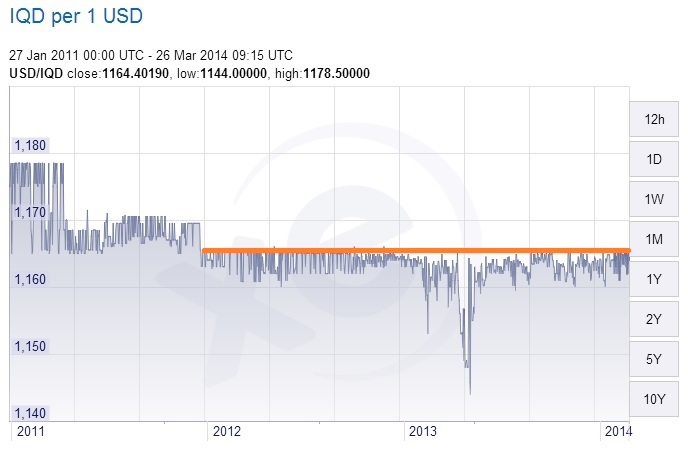 Just how is this gold purchase supposed to “stabilize” the Iraqi dinar, as the CBI puts it? Everyone knows the central bank uses daily currency auctions to virtually peg the dinar’s value as depicted in the graph above.

The CBI doesn’t need to increase its gold reserves to stabilize the dinar. Iraq’s central bank must be up to something.

Is the Long-Awaited Currency Revaluation Near?

Since early 2010, talk of a redenomination by chopping off the last three zeros on Iraq’s notes has been anticipated by many. Should it ever happen, the move is expected to be accompanied by a simultaneous revaluation of the dinar by inflating its value overnight, which is seen as necessary in order to properly account for the nation’s vast increase in wealth through oil revenues since the end of the 2003 war.

Thanks to the country’s enormous oil reserves which rank 5th in the world, and its steadily increasing oil production which ranks 7th, progress has been remarkably quick. According to Trading Economics, Iraq’s GDP has grown an average of 6.625 percent per year since 2005, reaching 8.58 percent in 2011 and a stellar 10.2 percent in 2012 – ranking 14th highest in world according to The World Bank. Iraq is in the best shape it has been in years, and is well on its way to mounting one of the greatest economic recoveries since Japan and Germany of post-World War II. 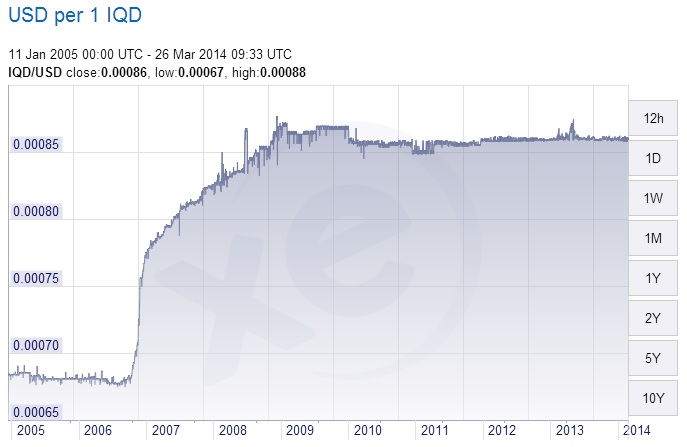 Is this why the CBI purchased so much gold this month? Is it preparing to increase the dinar’s value for a second time, as everyone has been expecting? The answer is most likely no.

Increasing a currency’s reserves – through acquiring more U.S. dollars, U.S. treasury bonds, gold, etc. – will strengthen a currency. But if Iraq already has more than 10 years’ worth of economic progress that has yet to be priced into the dinar, then the CBI does not need to buy more gold to increase the value of its money. Ten years of oil wealth would be enough to justify an upward revaluation of the dinar all by itself. If the CBI really wanted to revaluate its currency, it doesn’t need more gold to do it.

Given the CBI’s relentless pressure on the dinar for so many years, it is unlikely to raise the value of its money any time soon. A cheap currency stimulates business activity, creates jobs and lubricates the gears of the economy. It is precisely what western nations have been doing for the past five years since the 2008-09 financial crisis.

So still we need to ask – if the CBI does not want a stronger dinar, why the extra gold? What is the CBI up to?

Why the Extra Gold

While extra gold in its vaults does give the CBI room to increase the value of the dinar, it is likely that the CBI would rather use that extra room to print more money instead. The CBI has been steadily expanding the money supply for years. The extra gold gives it the ability to keep doing so.

Look at it this way… $100 would allow you to buy one dinner at an expensive restaurant, or ten average dinners at McDonald’s. You could thus afford a little of something expensive, or a lot of something cheap. It all depends on what you are looking for – quality or quantity.

In the case of Iraqi money, the CBI would rather have quantity over quality. Using the extra gold to expand the money supply instead of boosting the value of the dinar affords benefits which are much more urgently needed – especially while reconstruction is still ongoing.

The most urgent problem that Iraq faces is a growing population and not enough jobs, as noted by the following graphs. 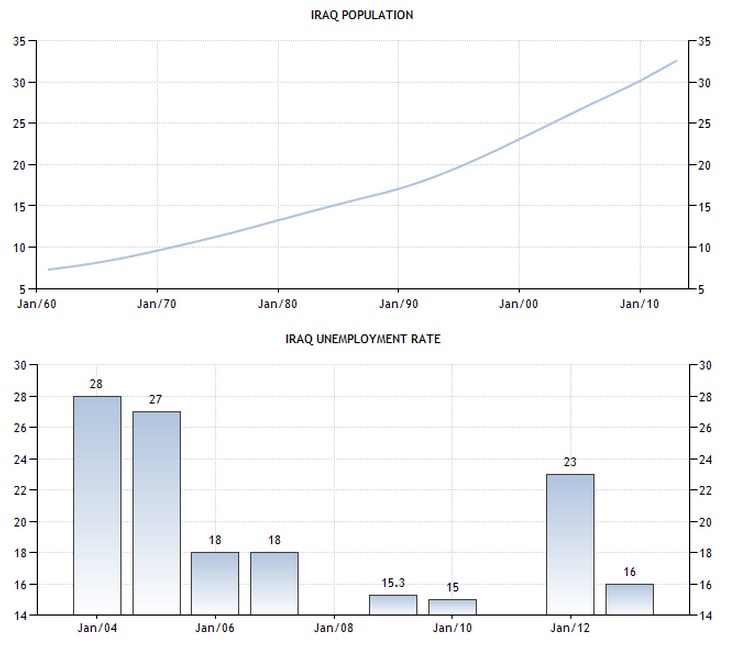 Iraq’s population has grown by 25 percent since the war ended 10 years ago, while the unemployment rate has been cripplingly high. While fixing this problem is not as easy as I attempt to make it, we could condense the process into one basic objective – create jobs and increase the citizens’ personal wealth.

That triggers a series of remedies:

• A) Make money cheaper. A cheaper currency is cheaper to borrow, stimulating business expansion and job creation, putting money in people’s pockets which is then spent to further stimulate commerce and growth. But how do we make money cheaper?

• B) Increase the money supply. The more money there is circulating through the economy, the cheaper it is to borrow, which empowers businesses, expands commerce, creates jobs, and increases personal wealth. As shown in the graph below, the CBI has been printing money with gusto, steadily increasing the amount of dinars in circulation for years.

But that created a problem. Such a rapid expansion of the money supply caused the currency to fall in value too quickly, eroding purchasing power, making prices more expensive, and creating hyper-inflation - as noted in the graph below where inflation in Iraq reached an incredible 76.55 percent by August of 2006.

While a weak currency is desirable as it stimulates the economy, it mustn’t be so weak that its buying power can’t keep up with rising prices. Money is like blood in your body. You want it thin enough to circulate freely, but not so thin that it loses its oxygen carrying power.

So how do we stop a currency from falling too quickly and reverse hyperinflation?

• C) Increase the interest rate. By increasing interest rates on government bonds, a central bank increases the value of its currency, allowing it to catch-up with runaway prices and bring inflation down. Thus, as noted in the graph below, the CBI increased the interest rate from 7 to 20 percent over 2006 and 2007.

Did it work? Absolutely. As noted in the prior graph, inflation in Iraq fell from 76.55 percent in August of 2006 to zero by the end of 2007. The raising of interest rates is what accomplished it. 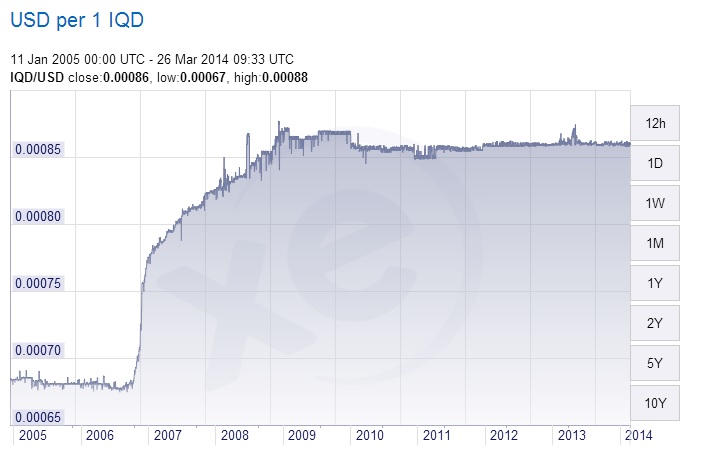 By 2009, interest rates at 14 percent were way too high to stimulate growth. It ran opposite to what the government wanted to achieve, namely job creation and increased wealth.

So the challenge remained: How can you bring interest rates down to make money cheaper, and pump more dinars into the economy to make money more available - without collapsing the dinar and triggering hyperinflation all over again?

That’s where gold comes in.

A Little Boost from Gold

By boosting its gold reserves, the CBI gains some room to play with. It can use that extra room to either increase the value of the dinar, or to print more dinars and release them into the economy without depreciating the dinar and triggering inflation. In the interest of job creation and economic stimulation, it has chosen the later, as most central banks have done worldwide.

So the CBI was speaking truthfully after all. It did buy the gold to help stabilize its currency. But not to make it stronger. Rather, to prevent the dinar from collapsing and to prevent hyper-inflation as it prints more money to finance its continuing reconstruction.