How to Protect Yourself from the Next One

It's not just Greece; the entire world has a debt problem that can never be fixed. The difference is that right now, everyone knows Greece can't pay its loans back.

Greece owes more than $300 billion. Its annual GDP is around $240 billion. And its economy is falling apart...

Greece has been in recession since 2008, and that has shrunk GDP by 25%. The unemployment rate now stands above 27%, and Bloomberg reports that 300,000 small businesses have failed since the financial crisis.

It's a disaster that can only be fixed if Greece defaults on all its loans, leaves the EU, and starts over from scratch.

The IMF said as much in a recent report. Here's the link if you want to read it. I did, but I don't recommend it — it is complete and total B.S. Basically, the IMF says that if Greece can grow its GDP by 3%, it can cut its debt by roughly $190 billion — by 2064.

You might wonder why the European Union bailed Greece out in the first place. The answer is that they (meaning France and Germany) did it to save their own banks. When the Greek Debt Crisis: Round 1 hit in 2010, French, Swiss, and German banks held more than half of Greek debt, a total of $150 billion.

Between 2010 and 2012, Greece was bailed out with around 200 billion euros ($220 billion at current rates). More than half of that went right out the door to French, Swiss, and German banks. In other words, the Greek bailouts were really just a backdoor bailout for EU banks.

You may know the name Yanis Varoufakis as the Greek villain/finance minister who just resigned. His was the loudest voice declaring that Greece was getting a bad deal from Europe. He said:

The Greek 'bailouts' were exercises whose purpose was intentionally to transfer private losses onto the shoulders of the weakest Greeks, before being transferred to other European taxpayers.

It's easy to say beggars can't be choosers. It's hard to take seriously Greece's demands that it gets to dictate the terms under which it is lent money that it can't pay back. But on the other hand, Varoufakis is speaking the truth: The Greek people are ultimately paying for the bailout of EU banks.

If you see parallels to how Americans are still suffering as a result of the financial crisis and bailouts while the big banks that started it are all doing pretty darn fine, well, you should.

As I said at the open, it's not just Greece. The entire world has a debt problem. There are about six countries in the world that ran a budget surplus in 2014. Most countries have been running deficits since 2007.

Here's a chart from Global Finance (sorry for the length) that shows the dirty truth: 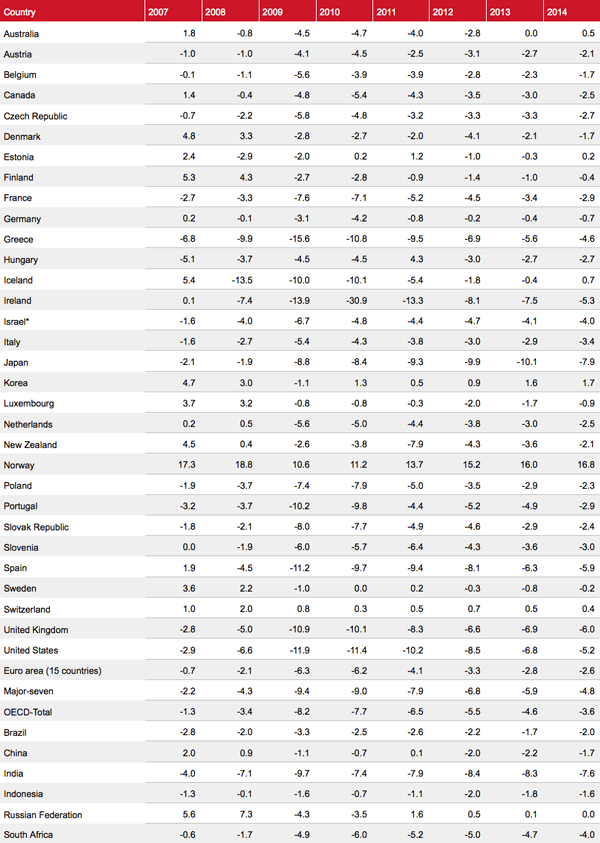 Hey, at least we're not as bad as Greece!

The idea that global debt will ever get paid off is ludicrous. It just isn't going to happen. So where does that leave us... and the rest of the world?

Well, for one, it means we will see more currency/debt crises in the years to come.

Governments are going to simply keep juggling debt and interest payments, keeping the balls in the air for as long as possible. But of course, there will be times when the balls fall to the ground...

Clearly interest rates will be very important going forward. Payments made at 3% are a lot easier than payments at 5%.

In fact, rising interest rates were a critical factor in the Mexican peso crisis in the 1980s. Paul Volcker's war on inflation pushed rates so high that Mexico was paying 15% of its GDP just to service its debt.

Interest rates also had a hand in the Asian currency crisis in the late 1990s. Alan Greenspan was raising rates, putting a squeeze on countries that had their currencies pegged to the U.S. dollar, like Thailand and Hong Kong.

So watch interest rates. If they rise quickly, you can bet some country will have problems with its debt. (This is one reason the imminent Fed rate hikes are an issue.)

From an investment perspective, you should look to buy those crisis lows — buy when there is blood in the street.

Is Greece there yet? I'm not sure. But I can say that once a country defaults and those loans are off the books, that country's economy will perform pretty well.

And if there's money to be made, investors will get their confidence back pretty quickly...

It's also why you should own an alternative currency like gold or Bitcoin. Gold is the easiest to own, though Bitcoin might be the easiest to use. After all, gold will have to be converted back into currency, while Bitcoin has buying power as it is.

When it comes to gold, I prefer bullion you can physically own. Call me paranoid, but I don't trust premiums on collectibles. Though I suppose if you bought newer minted coins that don't carry much premium, that would be fine.

You may have noticed gold prices have been down the last few days. That's because the U.S. dollar has been rallying. And the current crisis isn't American.

We may be entering a new era where debt crises spring up more often. Be prepared.