Get That Dry Powder Ready!

This last six months has been the absolute worst start to a year in five decades.

Fifty years since we’ve had a half where the markets were down so far so fast.

And we’re not out of the woods just yet.

But there’s going to be some light peeking in even before we get to the end of the tunnel.

And I want you to be ready for it.

The Smartest People in the Room

You see, I got my start on Wall Street in the fixed-income market. It’s where corporate and government bonds are traded.

Most people don’t know much about it, but it’s probably the most important market out there.

And I say that because the people I worked with on the fixed-income trading desks were the smartest people at our company.

They could do complex math in their heads, look at a chart for a few seconds and know where rates were headed, and settle their trades in one day (instead of the three it takes equity traders).

They also provide the capital that banks like Morgan Stanley need to run their operations every day. That means finding a way to come up with several billion dollars of cash flow on a daily basis.

Literally, if the fixed-income markets didn’t exist, neither would the equity markets.

They’re also very important because they’re a predictor of things to come in equities.

Fixed-income traders are far more immersed in data than even the most prolific day-trader.

And they often see things coming far before the rest of us.

Back in 2021, they gave us about three months’ notice that a top was coming in the stock market: 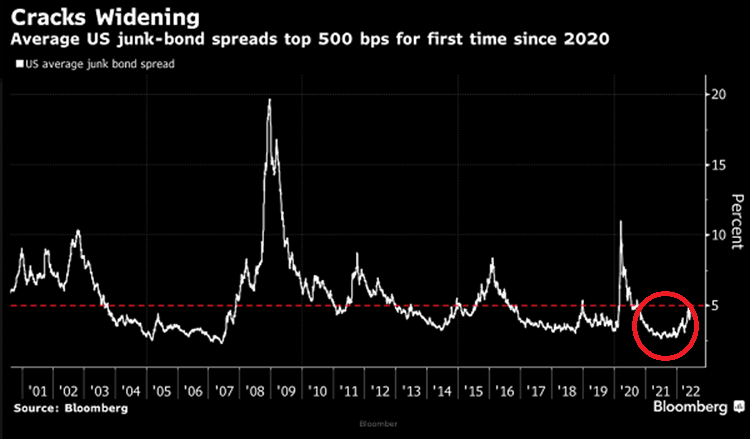 About three-quarters of the way through the year, spreads in those markets (the difference in yield between bonds of a similar maturity but with different credit quality) bottomed out.

About three months later, the markets hit a top and have been selling off ever since: 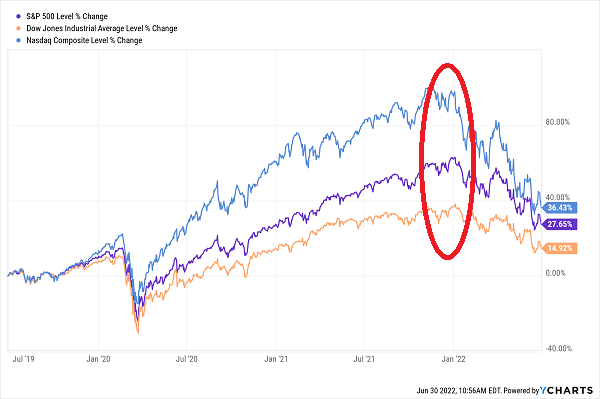 But nobody really listened and everyone still seemed shocked that markets weren’t going up anymore.

Well, now those same fixed-income markets are giving us a new signal.

And I want to make sure you’re paying attention and ready for what it means.

Because right now, while the equity markets are still trying to find a bottom they can hold and climb back up from, the credit markets have given us a firm date.

Those super-smart people are watching the markets and the data. They’re fixated on the rates and the yield curves.

And as of this week, they’ve done a complete turnaround. They’re still predicting inflation and recession.

But they’re also seeing cracks in Jerome Powell’s hawkish posture. They’re betting that the economy will collapse under the weight of higher interest rates.

And they’re betting that Jerome will get scared, blink, and cut rates at least 50 basis points come next year.

And that’s something I’ve been predicting for a while now.

It’s the Fed’s fault we’re in this mess to begin with. You can blame the $6 trillion in stimulus if you want, but the markets have already given back twice that in value this year.

Equities have lost a solid $10 TRILLION in value. Cryptos have shed another $2 TRILLION.

That’s $12 TRILLION gone, completely wiped out in what amounts to the blink of an eye.

Because it’s not just the money. It’s the ease of access to more of it.

It’s the rates. And that’s 100% the fault of the Federal Reserve.

Then, when everyone and their grandmother could tell we were getting hit hard by inflation, they chose to do nothing and told us, “We got this, don’t worry. Nothing to see here. Please move along.”

Well, they didn’t have it, there was a lot to see here, and we should not have just moved along and believed their narrative.

And here we are. The Fed is killing the economy trying to play catch-up on the work it should have been doing last year (but was too busy engaging in insider trading to have time for).

Why would we ever think it’s going to get it right this time?

So the fixed-income market sees in the data what I see in the psychology.

The Fed doesn’t have the balls to kill inflation because it’ll also kill economic growth.

They’ll hike rates this year, only to drop them again next.

They’ll try to balance raging inflation against economic growth and fail miserably at both.

But the drops are going to be gut-wrenching in return.

And there’ll be great opportunities for long-term investors to snag incredibly valuable legacy companies for less than their enterprise value.

And no matter what kind of investor you are or how long your timeline is, there is one thing you’ll all have in common.

That’s the fact that having some cash to make those investments and trades is going to be crucial.

The Fed is going to cause a recession. Companies are about to announce Q2 earnings.

Get ready to hear a whole lot about “cost cutting” and “streamlining operations.”

And understand that those phrases mean one thing and one thing only: massive layoffs coming our way.

So we can’t just rest easy thinking we’ll have income from our jobs to invest in those opportunities.

Because, while I don’t wish it on anyone, I know a lot of people are going to be out of work in a few months.

And when daddy don’t work, momma don’t get paid…

Unless, that is, momma and daddy own assets that spin off cash.

Getting Paid to Exist

And that’s really what I want to help you with today.

And the only way you can get cash if you’re not working your butt off for it is by being an owner.

It’s by buying assets instead of liabilities.

And what that means is buying things that spin off cash, that provide steady income...

So that when you’re not working — whether you get laid off or decide to take a vacation — you’re always earning money.

Money to pay your bills…

Money to save for emergencies…

And money to trade those face-ripping rallies that accompany every bear market and recession.

Welcome to the Family

I want to help you get a reliable and growing income stream together.

Because my favorite kind of investment is the kind that pays me to be an investor.

So I’ve spent my career researching and uncovering the best income opportunities on the market.

I even wrote a book about it called, fittingly, Endless Income.

So I took some time to compile the nine absolute best income-generation opportunities I’ve ever come across.

Combined, these nine opportunities could help you secure annual payouts worth well over $100,000!

Now, I don’t know about you, but that sounds like a good chunk of change to me.

And I know I could put it to good use buying beaten-down gems that are going to soar when this strife passes.

I’d bet you could too: buying stocks, paying down debt, taking a vacation…

It’s your money, so you could do whatever your heart desires with it.

All you’ve got to do is elect to get your share and then watch the checks start flowing.

And they don’t stop just because rates go up or markets go down.

They won’t lay you off because they’re “cutting costs,” either.

They’ll just keep spinning off income and sending it to you for as long as you want to receive it.

And because times are so tough, I’m offering them to you for FREE…

All I ask is that you take a trial run of my income-focused investment advisory service.

All That Plus More!

You’ll get a whole lot more than just my top income-producing investments, too.

As a member of our community, you’ll also get:

And to sweeten the deal even more, I’m throwing in a digital copy of my book, Endless Income, too.

It’s packed with over 30 ways to make more money, keep more money, and spend less money, all while living a lifestyle you never thought possible.

There’s no risk to you. If you don’t like what I’ve got to offer or just don’t think it’s worth the price, I’ll send back every penny you’ve paid.

And as an added bonus, I’ll let you keep all nine reports I’ll send you on how to generate an extra salary every year. You can keep your copy of the book as well.

That’s how serious I am about wanting to make sure you’re ready.

It’s also how confident I am that you’ll absolutely love our community.

I don’t think you’ll ever want to leave once you see what we’ve accomplished together and what we can help you accomplish, too.

So get yourself ready for the next Fed pivot and the next face-melting rally by locking down your steady stream of fresh cash TODAY.

Like I said, there’s no risk. And granted I’m a little biased, but it could literally change your life.

So get your reports and your book, give me a shot, and get yourself ready to make the buys that will cement your family legacy.