Get Ready for Drones in the Mainstream

The Drones are Coming... 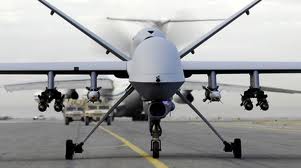 Yes, drones are the future. Just a few weeks ago, Amazon (NASDAQ: AMZN) came out with an exciting new plan to have drones deliver packages. Now, many other companies are turning their attention to them.

But will it be possible?

Drones are already being used in a different sense. They are used in the military to hunt terrorists in Pakistan and Afghanistan, and they're even used to put down bombs.

So it’s completely possible drones can deliver packages. But the main problem with getting this started is the Federal Aviation Administration. The FAA wants to ensure the drones will be safe and preserve the privacy of the package’s recipient.

What’s Holding Back the Drones

Developing regulations for the operation of commercial drones will end up taking a long time, and the FAA isn’t trying to speed up the process. It was supposed to have been farther ahead to bring unmanned aircrafts safely into commercial airspace by 2015, but it's missed the deadlines needed to make this happen.

On Monday, a report was released by the Department of Transportation stating that coming up with the regulations is one of the biggest challenges. The FAA needs to find a way to fit the drones into the airways alongside everything else that is moving up there.

Its biggest concern is how to keep the unmanned aircrafts from crashing into things such as airplanes, birds, building, etc.

There’s also a problem in that some states have banned the use of drones. In Idaho and Texas, drones for private use are banned.

And the number of states with restrictions on them may increase. This is especially true as commercial drones become a reality.

Moving Drones Further Into the Future

Of course, companies such as Amazon and Google (NASDAQ: GOOG) are trying to get testing areas underway to come up with solutions. Each one of them is trying to be the first to release a drone, and that has led to a wild race to the finish line.

Google recently bought Boston Dynamics, which will be used for the study of the drone’s use in delivery.

And there’s a huge market for drones as the online shopping industry increases rapidly. As websites become larger and offer larger selections, more people will use them, which means more purchases will need to be shipped.

Don’t worry too much about the regular postal service going out of business. It’s not as if the drone will be able to take care of all packages. It’s only a small carrier. Those things that are too heavy or large will still need the help of the postal service... for now.

How to Invest in Drones’ Future

There's little doubt that drones will one day make a huge dent in the package delivery industry. So what does this mean for you as an investor?

Well, as you know, when there’s a new technology, everyone gets really excited. Tech enthusiasts embrace it and want it to succeed. And when people want something to succeed, they are willing to throw money at it… large sums of money.

That’s your cue to try to get some of the profits that come out of it. For this situation, the best way to get something out of this is by looking into the companies that are researching and producing drones.

The news of drones is going to affect those stocks. Whenever there is good news, there will be an increase in price because these are the companies making headway in the industry.

Just be careful: If the FAA ends up saying it’s not possible, you could end up losing.

Of course, there’s always a risk at losing with investments, so do your due diligence and try to decide where you'll be most comfortable.