Are We Set Up for Another Crash?

So large was the collapse of Lehman Brothers Holdings Inc. that America’s economy is still swaying from the reverberations all these years since.

It was the largest U.S. bankruptcy to date when it collapsed in the thick of the 2008 financial crisis, with a net worth of negative $129 billion. 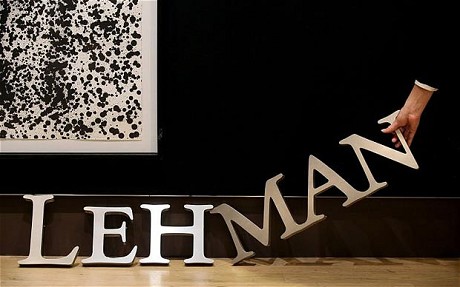 Have we learned anything from its failure? We should hope so, because precisely the same conditions that built Lehman up and then felled it down are present once again: a booming housing recovery, a hot mortgage market, ultra low interest rates, and enthusiastic mortgage securitization.

And what of the handling of the crisis these five years since? Have central bank policies and government priorities sped the recovery along? Or have we stunted our own growth by adhering to the wrong set of priorities?

The simplistic explanation of Lehman’s collapse focuses on its own internal investment policies. The 2001 U.S. recession and subsequent bear market into 2003 forced the Federal Reserve to lower interest rates from 6.5% to just 1% in an effort to spark the economy.

It didn't just spark the stock markets; it also set the real estate market on fire. And the banks were fueling the buying all the more by enticing buyers with fantastic introductory rates and bare minimum qualification requirements. Lehman Brothers jumped into this sub-prime mortgage market with both feet.

When interest rates started to rise in 2004, mortgages began failing as borrowers could not afford the higher payments. The banks quickly divested themselves of their riskiest loans by packaging them up into funds and selling them on the stock market and to other banks around the globe.

By the time the Federal Reserve rate reached 5.5% in 2007, these “toxic” loans and mortgage securities had infected the world. As properties foreclosed and mortgage funds plunged, banks around the globe – and even some governments – were facing bankruptcy in alarming numbers.

So out come the bailouts and stimulus packages. Since the 2008 financial crisis, the largest six banks in the U.S. – Bank of America Corp. (NYSE: BAC), Citigroup Inc. (NYSE: C), Goldman Sachs Group Inc. (NYSE: GS), JPMorgan Chase & Co. (NYSE: JPM), Morgan Stanley (NYSE: MS), and Wells Fargo & Co (NYSE: WFC) – have received some $102 billion in tax breaks and government bailouts, estimates Bloomberg. Others, such as ProPublica, believe the total is closer to $160 billion. Meanwhile, interest rates were once again pushed back down to 0.25% by 2009, where they still stand now.

So here we are again, right back where we started. Ultra low rates have fueled a frenzied housing spree, and again we are seeing the packaging of adjustable mortgages into REITs, not just in America but in Asia, Europe, and elsewhere.

Have we learned from the errors that were made the last time we were here? It may seem so. Dodd-Frank legislation calling for more stringent mortgage qualifications is near completion and due to take effect January 10th, 2014. It is hoped that lenders will now exercise some discretion when approving borrowers for loans.

Plus, bank deleveraging is well underway with the third stage of bank recapitalization requirements under the international BASIL agreements, due for completion in 2014. Simply put, banks were taking on too much risk for the cash reserves they had on hand, with leverage reaching 40 to 1 in some cases. It is hoped the larger cash reserve requirements under BASIL will lower bank leverage and reduce their risks.

Just how well has the U.S. economy recovered since the crisis of 2008? While there are many ways of measuring economic progress, the bottom line is this: growth requires consumption, consumption requires wages, wages require jobs. It’s all about jobs. (Data: TradingEconomics.com)

Of course, we have to understand that the recession triggered by the 2008 crisis is a once-in-a-generation event, unmatched by anything since the depression of the 1930s. So we can’t expect a full recouping of all lost jobs so soon. But we could have had more than this. As it is, employment has shrunk while the population has grown.

There has been improvement in both the housing and equities markets. Yet there, too, we could have had more. How? By reassessing the nation’s priorities.

In times of crisis, resources need to be concentrated in the most essential place: job creation. Returning more people to work benefits the government by generating greater income tax, as well as more sales tax when the employed go shopping. Increased shopping, in turn, stimulates businesses to grow and hire some more. Investing in job creation not only expands the government’s revenue base, it expands the economy.

But the last five years have seen a misplacement of valuable investment dollars that were redirected away from job creation toward lower priority goals, such as debt reduction, healthcare, and bank bailouts.

Don’t get me wrong, reducing debt is important. Attending to our fellow citizens’ health needs is too. And of course, we need the banks to stay open. What economists are saying is that these should not have been tackled at such a critical time as this. Job creation should have been the prime objective.

With all the work that still needs to be done, government spending should be higher now than it was before the crisis, not lower. Europe’s stagnation has clearly shown how austerity is counterproductive. Times like this require a government to spend, not pinch.

But hasn’t the U.S. already pumped over a trillion dollars into its economy through stimulus? Yes, but where has it all gone? Into banks and the bond market. Its ammunition has been wasted on duck and fowl, when it could have had heartier beef.

Raising the interest rate just a little would generate considerable revenue for the banks to deleverage and recapitalize on their own. This would free billions of dollars each month for investment directly into business expansion and job creation.

If you had just $1 left in your pocket, you wouldn’t use it to pay down your bank loan or your medical bill. You would spend it on a bus ride to work, where you would earn $50 for the day. Then you could put $10 onto your loans and bills, have your meal for the day, and return to work tomorrow.

Jobs are what stimulate an economy. And it was government spending on public works and job creation that helped America out of its last depression in the 1930s.

The Next Five Years

It is almost certain that the next five years going forward will be better than the five just passed. We may have had our recovery slowed somewhat as our governments have tried to do too much all at once instead of focusing their money where it would do the most good.

But nonetheless, the way forward seems smooth – that is, as long as we investors prioritize our investments and don't spread ourselves too thin.

Important changes to the Federal Reserve’s composition will certainly have an impact on monetary policy going forward. Not only is the Chairmanship being replaced, but so are four other member positions – a full 25% of the entire body. Chances are the Fed of 2014 will be a little more hawkish than it is now, with stimulus reductions a near certainty.

In equities, American stocks should be prioritized over European companies. Years of austerity have stunted Europe’s recovery, which is only now beginning to receive stimulus. America has a four-year head start on Europe, so keeping your money at home would be prudent. So would holding USD over foreign currencies, which will continue feeling pain as the dollar strengthens all the way to rate normalization by 2018 or so.

While another financial crisis similar in scope to the last is unlikely given the lessons learned and the regulations it has birthed, there are plenty of other crises waiting in the wings. If a strike against Syria escalates into regional war, crude oil and gold will be squeezed higher under the pressure. Gold may not have been there for us lately, but it knows how to answer the call when a crisis strikes… and rather quickly too.