Four Signs We Are Forsaken

It's been a hell of a run. The economy is back on track.

A new survey from the National Association for Business Economics suggested that jobs were coming:

The number of economists who saw hiring by their firms increasing over the next six months was 42 percent, compared with 7 percent who expected to lay off workers. The NRI of 35 was the highest in the 12 years that the question has been asked.

Some talking heads are suggesting the economy grew 3% in the fourth quarter of 2010. Companies slashed costs, became mean and lean, and drove profitability to record levels.

Intel — one of the companies I told you to buy two weeks ago — just said it was buying back $10 billion in shares.

Ben Bernanke has been pumping up liquidity to drive the stock market higher. His plan has worked to perfection...

The Dow only goes up 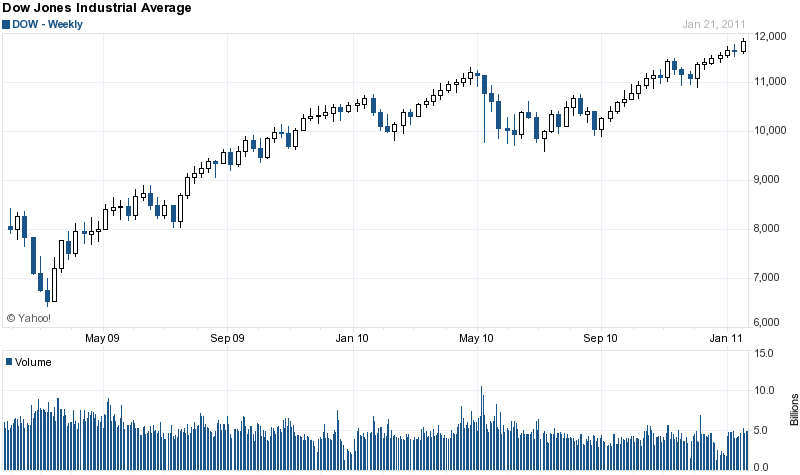 There is only one trade on right now.

Group-think means the trend is your friend. "Don't fight the Fed" is the mantra bleated by the sheeple. The blind squirrel investors have found their nut and assume there is another one just over there, ready to be eaten.

This of course, raises my contrarian hackles.

Take a look at this chart...

Barry Ritholtz over at ritholtz.com had a great point when he wrote:

At 90% gains, this market has run further and faster than any previous rally. Indeed, in just 20 months it has far outpaced every other rally’s 24 month record by some 50%; the next closest gainer was 65.7%. That does raise some cause for concern short term. 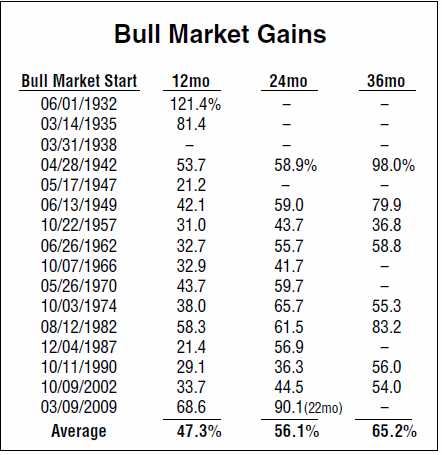 The market has never gone so far, so fast as it has in the last two years.

After a 90% run, which is a more likely scenario — that the Dow goes up another 90%, or that it corrects?

Not only do small cap stocks (under $300 million market cap) lead over the long haul, but they also lead the way out of recessions.

These are the smaller, quicker companies that are able to adjust to the economic landscape, and fast to roll out new products.

T. Rowe Price found that in the 12 months following the previous nine recessions, small-cap stocks gained 24%, versus 17.6% for the S&P 500.

Merrill Lynch reported that in the 18 bear markets since the 1930s, small caps gained an average of 41.4% in the 12 months after the end of the decline, compared with a gain of 32.4% for large caps.

It has been true with this bounce back, as well. Small caps have been on fire until last week. 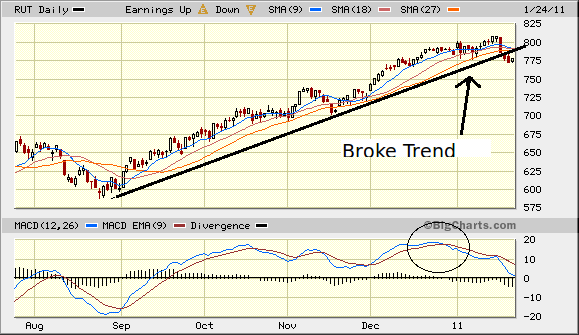 No more bailouts to states

Another reason to think about taking some profits is that there are no more bailouts coming.

The majority of 2008's stimulus package went to the states. This equals about $400 billion that the states used to keep running. Given the current state of Congress, more money won't be forthcoming in 2011. This could reduce GDP by up to 2.7%.

Add to this the spending cuts being talked about in Washington, and we could see another drag on GDP.

According to The Hill, Sens. Saxby Chambliss (R-Ga.) and Mark Warner (D-Va.) plan to introduce a dramatic spending cut bill aimed at reducing federal spending by $4 trillion. The republicans put out a proposal to cut spending by $2.5 trillion over ten years.

The suckers are back

The stock market is a ravenous beast that likes to steal your money.

Twenty-two months ago at the bottom, it forced people into selling. Now — after a record bull market — it is convincing those who have been sitting in bonds back into equities.

Greed is back, enticing those who don't know better to walk back in at the top...

According to Strategic Insight:

After putting more than $570 billion into bonds over the past two years, mutual fund investors reversed course last fall, worried that the prospect of rising interest rates and the growing deficits of state and local governments were bringing bond prices down. In the last two months of 2010, investors withdrew a net $23 billion from bond funds.

My point here isn't to say you can't make money in the markets.

I just banked 40% for my readers of Crisis & Opportunity by picking up some Crocks Inc. put options. I plan on making more money this week on some bear funds.

Next week is peak earnings season and a traditional short-term top when the smart money sells the news.

There's a lot of opportunity out there for those who don't want to be suckered in by the same old Wall Street platitudes...

The upshot is that buy and hold is dead. It's time to be a sniper.