Investors are getting heated over Yukon gold exploration stocks, but the cold weather may put a bit of a chill into share prices until next season...

During the dark and frozen winters of Canada's Yukon Territory, efforts to explore and develop new gold resources are crippled.

So work on Yukon gold projects is pretty much at a standstill right now.

Some gold companies, however, have prepared for the wintertime lull in Yukon exploration by staking other gold claims in warmer global regions...

Radius Gold (TSX-V: RDU) is a precious metal exploration, joint-venturing, and royalty firm that is currently focused on gold and silver projects in the Yukon and Guatemala.

The company is part of a larger group of mineral firms lead by Simon Ridgway, a world-renowned prospector and mining industry financier.

For Radius Gold, Ridgeway and his team have assembled a regionally diverse portfolio of nine total projects in Canada, Guatemala, Nicaragua, Mexico, and Peru.

The company has already entered into joint ventures on seven of their gold and silver projects with companies including Solomon Resources (TSX-V: SRB), B2Gold (TSX: BTO), and Kappes, Cassiday & Associates — one of the world's leading gold experts in heap leaching.

Right now, however, Radius Gold's exploration focus are the company's 60 Mile Yukon Gold project and the Holly-Banderas project in Guatemala.

The 60 Mile Gold project is located in the world famous Tintina gold belt, and covers six creeks and rivers where placer gold was historically mined.

Records show that 500,000 ounces of placer gold has been historically recovered from Radius' claims.

The company says that the project has strong geological similarities to International Tower Hill's (TSX-V: ITH) Livengood gold discovery in nearby Alaska. The Livengood deposit is currently home to over 7.6 million ounces of indicated and inferred gold resources.

In addition to the Livengood deposit (marked #7 in the map below), there are many other world-class gold mines through the Tintina gold belt in Alaska and the Yukon. 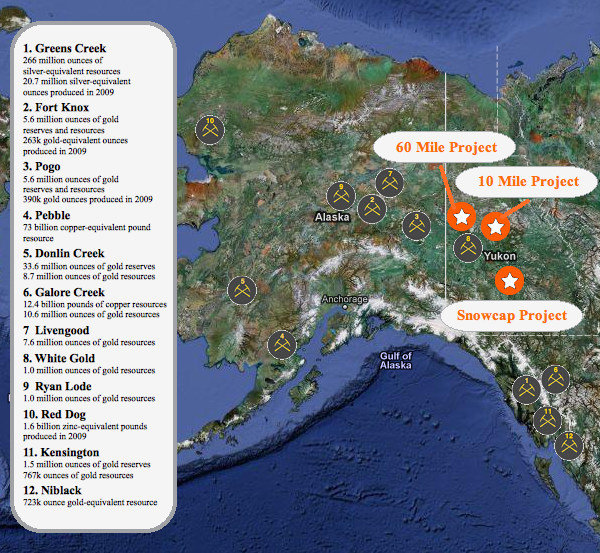 But these seven holes are just the very beginning of all the needed to be calculate the size of a gold resource or reserve as standardized by the Canadian Securities Administrators.

As I mentioned, however, gold exploration in the Yukon is on hold right now, and Radius must wait until the ground thaws to begin a new drill exploration program at the 60 Mile project...

In the meantime, the company can continue to add to shareholder value by developing its Holly-Banderas project in much warmer climate...

The 9,000 hectare project is a great regional prospect with two nearby world-class gold and silver mines.

Only 30 kilometers to the south is GoldCorp's (NYSE: KGC) Cerro Blanco high-grade gold deposit, which contains 2 million ounces of gold resources and reserves. 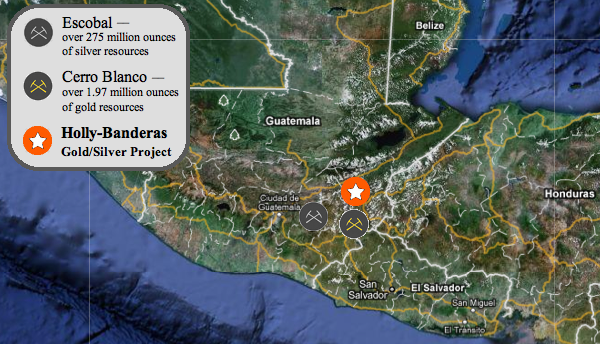 The company discovered and drilled the project between 2002 and 2004. At the time, the precious metal bull market was just getting started, and prices hadn't really started to significantly rise, so the project was put on hold.

But now — with gold and silver prices breaking record levels and with the recent discovery of world-class gold and silver deposits right next door — Radius is once again actively exploring the Holly-Banderas project.

Following the announcement of the drill results from the 60 Mile project in mid-November, Radius quickly initiated a much larger 10,000-meter exploration drill program at Holly-Banderas.

This campaign is testing an area at the Holly-Banderas project called the Pyramid Hill zone. Radius is still running the program and I expect we'll see drill results sometime in March, but hopefully sooner.

Wait out the winter

A steady flow of good news is very important for junior gold exploration companies; it keeps investors interested in the story and sustains share prices.

But for gold companies with assets exclusively in Canada's Yukon, sustaining the flow of positive news during the wintertime may be challenging...

That's why it might be best to wait until spring to begin owning companies that are focused on Yukon gold projects exclusively.

However, investors may want to consider owning shares of companies that have exposure to regions where they can continue to add to shareholder value through exploration.