Lately, I've seen a few stock market gurus say you should buy European stocks because they are really cheap. Barron's put out a huge article titled "Buy Europe" a couple weeks ago.

The gist of the piece is that Europe is cheap, corporate profits are expected to grow between 8% and 13% this year, and the potential upside of a weaker euro and some kind of quantitative easing from the Euro Central Bank (ECB) is worth taking a gamble on.

I feel like I am standing before a massive Sunday brunch buffet: there's ham, there's eggs benedict, there's piles of bacon and stacks of sausage, and there's an aproned man in a tall white chef hat who will make you the fluffy omelet of your choice...

I just don't know where to start.

There are just so many tasty nuggets of illogic in the "Buy Europe" thesis.

I guess I'll start with the value proposition — and I like value investing. But two things I've learned are that stocks are usually cheap for a reason and that cheap stocks have a tendency to get cheaper.

When you are value investing, you buy stocks that have been beaten down, and you need to identify a catalyst that will turn the stock price around.

For instance, I've been dabbling in some J.C. Penney (NYSE: JCP) for the last few months. With a market cap right around $2 billion and trailing 12-month revenue of $12 billion, it's cheap, no doubt. It also has $5 billion in debt and around $1 billion in cash.

Some investors think JCP will go bankrupt. But I see catalysts for improvements...

The company was already struggling a bit when the board went haywire and made former Apple exec Ron Johnson JCP's new CEO. Johnson proceeded to spend most of the company's $2 billion cash hoard trying to make the stores cool and succeeded in driving away many of the company's established customers, thereby crushing revenue by 25% and cutting the stock by 75%.

Today, JCP has returned the stores to what the customers want. It's been able to go to the bond market for cash (which it hadn't been able to do in over two years), it's stabilized its revenue and cut costs, margins have actually improved, and online sales are working.

The company basically just has to manage its debt now, and I think it can. (Plus, at current prices, JCP should be attractive to the private equity takeover crowd.)

Of course, I could be wrong. But I've got a good handle on the company's turnaround plans, and I understand the risks.

But with regard to Europe, I just don't see solid catalysts. It's more like hope: hope that Europe's economy won't get worse; hope that ECB chief Mario Draghi will ride to the rescue with some form of QE-style economic stimulus.

Wishing that something would happen does not make it so. Mario Draghi has been threatening to unleash a hell storm of stimulus since late 2012. And to be fair, he has done some bond buying to help out Greece and Spain.

But the ECB doesn't work like the U.S. Fed does. European countries have to approve actions by the ECB. And in general, the stable countries like Germany and the Scandinavian states don't want to help the struggling euro economies.

Seems to me that Draghi's hands are tied. And the idea that euro corporations can put together 8% to 13% profit growth this year sounds more like hope to me, because the euro economy has not shown any signs that it is on the verge of a U.S.-type economic recovery.

The EU Story in Pictures

Europe's economy is in tatters. Fourth quarter 2014 GDP is expected to be essentially flat from a year ago. In 2015, there's a very real chance Europe will go into recession.

To show you why, here are a couple charts from JP Morgan... 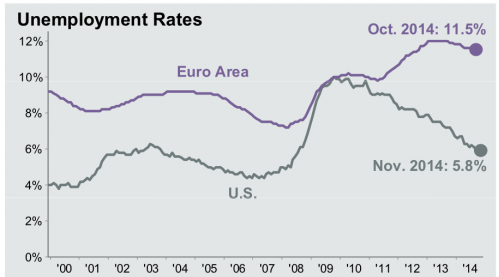 As you can see, at the start of 2011, unemployment in Europe and the U.S. diverged. It's gotten steadily better here in the U.S., while in Europe, it's gotten worse.

Now check out this chart of corporate earnings... 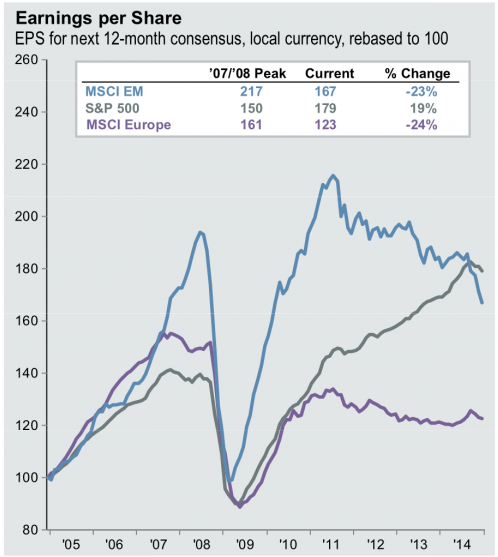 The important lines here are the gray (U.S.) and purple (Europe). Once again, Europe and the U.S. diverged in 2011.

In case you were wondering, 2011 is when the eurozone was wracked by the debt crisis in Greece, Spain, and Italy.

You'll recall that these countries got some bailout money and, in return, had to enact austerity measures. The European economy has never recovered... Manufacturing output has been falling for eight months in France, and it started dropping again in Italy, too.

Yesterday, yields on 10-year German bonds hit 0.44%. That is a sign investors are bracing for the worst.

So let's have a look at the original idea — that European stocks are cheap... 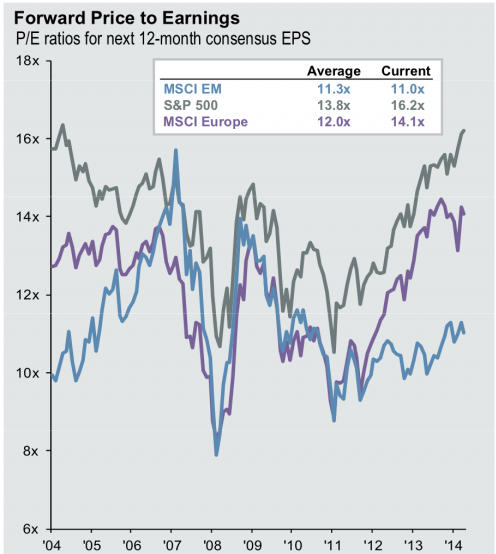 The forward price-to-earnings (P/E) ratio — which uses forward earnings estimates — for Europe has been rising since 2011!

And while European stocks (purple) are cheaper than U.S. stocks (gray), they are actually more expensive than their historical average.

So not only is Europe on the verge of recession, but the stocks aren't even cheap! Wow!

This is exactly why you have to dig below the surface of what you hear in the financial media — things aren't always as they seem.

I won't be buying European stocks anytime soon. If ECB chief Draghi fails in his bid for more stimulus, these stocks will get killed.

I will continue to recommend solid American dividend payers to my Wealth Advisory readers... because if you look back on all those charts, every one shows that whatever is going wrong in Europe is going right here in the U.S.

Now, let me show you one more chart that really sums up the opportunity in U.S. stocks... 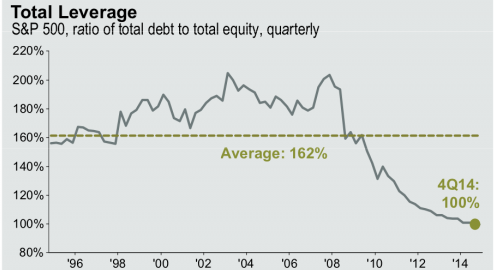 Ukraine's Lost Gold
Why did Ukraine's central bank liquidate 99% of its gold reserves?
Investing in Swiss Gold
Is the Swiss vote a referendum on gold or on fiat currency?
Investing in Palladium Futures
Palladium futures are moving, recently hitting a 13-year high. But is it a better investment than gold?
Buffett's Envy: 50% Annual Returns, Guaranteed
Warren Buffett once told investors at an annual shareholder meeting, "...it's a huge structural advantage not to have a lot of money. I think I could make you 50% a year on $1 million. No, I know I could. I guarantee that."