Fears over the potential collapse of the euro have been creeping back into the public eye as of late. While the reopening of Cyprus banks has helped to calm things down slightly, there is still a strong sense of anxiety in the air not only in Europe, but throughout the world.

Until yesterday, the euro had been at its lowest value in 4 months - $1.2750, according to CNBC. Much of the fear surrounding the future of the Euro comes from the Cyprus financial crisis that has been very much in the news as of late.

On Monday, the island was able to agree on a 10 billion euro bailout with international leaders to help reverse the potential economic collapse of Cyprus, with banks finally reopening as of yesterday after a two week closing period.

In order to hold up its end of the deal, Cyprus will shut down one of its main banks while downsizing another, which means depositors will be seeing rather large losses. 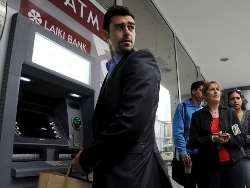 Cypriot banks were reopened yesterday amongst fears that a rush could potentially occur, with depositors doing everything possible to get large amounts of money out immediately. Fortunately, the situation remained calm in Cyprus, with patrons showing respect for the banks’ pleas to exercise patience and restraint once the banks were once again opened.

In order to prevent depositors from taking out large amounts of money from the banks, a daily withdrawal limit of 300 Euros was set in place, to last for a period of 7 days, according to Bloomberg.

Even though the future of Cyprus’ economy seems to be on a much better path than many expected, the financial crisis spells out a great deal of potential problems for the health of the Euro. The Cyprus crisis undoubtedly had a large role in the fairly recent weakening of the euro, which is only slightly stronger than the American dollar at this point.

Perhaps the bigger fear regarding the future of the euro, however, comes down to what may have happened if Cyprus did not receive a bailout and did indeed see a complete collapse of its economy.

If such a thing were to occur, depositors would no doubt withdraw their money and transfer it elsewhere. While many might believe this would be the end of Cyprus’ effect on the rest of the world, the fact is that economic decline such as this could be contagious and could easily occur in other sectors of the euro zone.

Repeated economic collapse occurring in multiple countries would no doubt continue to weaken the euro, potentially spelling the end of the currency.

The situation in Cyprus is not altogether unique, which elevates fears further that the euro could see trouble in the coming months and years. Given the tense air that still revolves around Cyprus even after the bailout, however, it’s likely that a great deal of attention will be paid to strengthening the euro and avoiding a repeat situation not only in Cyprus, but all throughout the euro zone.

Even with all the right steps in place, however, financial crises such as that which occurred in Cyprus could occur anywhere else in the euro zone, including in much larger economies that many mistakenly believe to be impervious.

Not everything is doom and gloom for the euro, however. As a result of the reopening of Cypriot banks, the currency was finally able to rise out of the four-month low that has plagued it recently.

Wall Street also saw positive effects from the calm reopening of banks. The S&P closed the other day at a record 1,569.19, the highest number seen since October of 2007, according to Reuters. This is good news not only for the euro but for the state of the entire world’s economy.

As reporters throughout the world continue to watch the Cyprus economy for signs of falter, Cyprus President Nicos Anastasiades will take a 25% salary cut, with his cabinet taking a 20% cut, according to CNBC.

While the future of Cyprus and other euro zone economies is certainly unknown, perhaps the near-catastrophic event that almost crippled the island’s economy will serve as adequate warning to the rest of the euro zone to ensure that such an issue does not occur again, at least for a sizeable amount of time.