So, it turns out that Elon Musk isn't the mature, self-assured adult we all thought he was.

Who would have guessed that a man who sells $500 garden torches, referring to them as "flame throwers," smokes Bob Marley spliffs during Joe Rogan interviews, and discloses substantive, non-public information pertaining to the share pricing of his multi-billion dollar company on Twitter isn't rock solid when it comes to controlling his feely-feels.

His most recent tour de force of emotional stability came this week, again via Twitter, after Microsoft founder Bill Gates made his recent choice of personal automotive conveyance public.

Instead of going with a Tesla, which (to many) wasn't just the obvious choice but the only one, Bill went with a competing design from legendary German performance brand Porsche.

Gates' choice, the Porsche Taycan Turbo S, is an impressive machine by any standard, but by the standards that matter the most when it comes to EV performance, it rises above everything else out there.

The numbers speak for themselves: 750 horsepower. 774 pound-foot torque. Quarter mile in just shy of 10.5 seconds, at a speed of 130 miles per hour.

Now, to be clear, Tesla's top of the line Model S actually edges out the entire field to 60 miles per hour by .1 seconds, but past that, it rapidly loses ground.

At the 100 mile-per-hour mark, the Tesla and the Porsche are neck and neck, and by the time the one-quarter-mile finish line comes around, the Porsche is ahead by .04 seconds and seven miles per hour.

Just for the sake of comparison, the hybrid LaFerrari is 18 and 23 miles per hour faster at the quarter-mile mark than the Taycan and Model S, respectively.

But that's beside the point. The Tesla S and the Porsche Taycan are so close in terms of off-the-line performance that it hardly makes a difference.

When choosing between the two, other factors come into play.

The Numbers That Matter

Then we come to looks.

They say that taste is subjective, but in some cases, the subject can be plain wrong — and this is one of those cases.

Sure, they're somewhat similar.

There Is No Substitute

Both have four doors and comparable proportions, but the Porsche is better looking. Period.

Say what you want on this matter. I don't care. Anybody who claims that the Model S is sexier than the Taycan is better off getting a Smart car and calling it a day.

Put all of these factors together, and Bill's choice is fully defensible. He wanted to be responsible and buy an electric vehicle, and he chose the one he wanted, with no compromises.

And what does Elon do when he catches wind? He takes to Twitter, of course, and fires off a glib, passive-aggressive kiss off worthy of a high school cheerleader who just lost her spot as the pyramid topper. 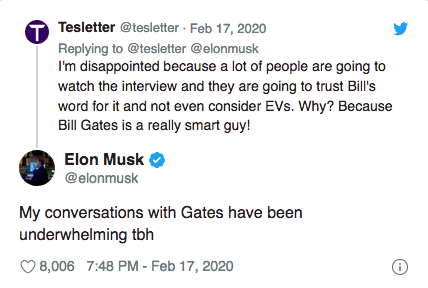 To cut through the confusion, the parent tweet refers to Bill's complaints of hard-to-find charging stations, not his choice of car.

But Musk's response, given the context, is simply laughable. You can almost picture him, sulking in a darkened room somewhere in his 20,000-square-foot Bel-Air mansion, trying to decide whether a dreary moment like this is better suited to indica or sativa.

"Hey Madison, did you see Olivia's dismount at the game last night??!!"

I know, I know; I'm probably doing a bit of overreacting myself here, but I'm not alone. Dozens of news outlets have covered this non-story since the tweet three days ago.

I guess it's just hard to imagine a guy like Bill Gates getting characterized as underwhelming by anybody, billionaire or not.

The last high-profile tech tycoon to do that was Steve Jobs, who called Microsoft products "third-rate" back in the mid '80s.

At the time of that comment, Apple was about to descend into a decade-long dark age, and Jobs was on his way out; Bill was on his way to becoming the richest guy in the world.

No matter how you look at it, the jab was infantile.

What Musk should be more concerned with isn't the free publicity Gates is giving to Porsche but, rather, the problems with the Tesla product line.

And I'm talking about the entire product line, including the as-of-yet unreleased Roadster, which Musk has already claimed will break the mythical two-second barrier for zero to 60 miles per hour.

You see, Teslas, as well as every EV on the road today, all suffer from one common defect.

It's an old problem (much older than the company), and it's profound, contributing not just to cost of maintenance and potential catastrophic failures, but limited range and performance.

This problem dates back to the very first electric motors ever built and sadly, has been inherited by the most modern iterations of the device.

Read more about this engineering conundrum and learn about how one company finally found the solution.

His flagship service, Microcap Insider, provides market-beating insights into some of the fastest moving, highest profit-potential companies available for public trading on the U.S. and Canadian exchanges. With more than 5 years of track record to back it up, Microcap Insider is the choice for the growth-minded investor. Alex contributes his thoughts and insights regularly to Tech Investing Daily. To learn more about Alex, click here.

Battery Innovator Teams Up With VW
The lithium-ion battery runs almost everything you use on a daily basis. And this small Canadian technology company is working to make them better than ever. Its work is paying off, because it just teamed up with a major automaker that will blow Tesla out of the water...
Tesla Projection: 10–20 Million Cars per Year by 2030?
Well, ladies and gentlemen, it sure has been a crazy week for the world's favorite electric vehicle maker Tesla Motors (NASDAQ: TSLA). Wealth Daily editor Alex Koyfman discusses whether or not the current predictions for Elon Musk's company are realistic...
Buffett's Envy: 50% Annual Returns, Guaranteed
Warren Buffett once told investors at an annual shareholder meeting, "...it's a huge structural advantage not to have a lot of money. I think I could make you 50% a year on $1 million. No, I know I could. I guarantee that."