It's a hipster's nightmare.

According to a recent NPR article, there are an average of four e-bike fires in NYC every week.

Granted, four fires per week in a city with an e-bike population of about 7 million might not seem exactly at epidemic levels, but when expanded to an annual basis, that's a catastrophic failure rate of about 1 per 33,600 e-bikes per year.

Now, apply that failure rate to another, more abundant class of lithium-fed product — wireless devices — and you're looking at close to half a million lithium battery fires per year.

It's not something you hear about often and is a fact that's often glossed over, but when you read between the lines, you start to see the reality.

The Signs Are Everywhere

Unplugged lithium-ion batteries are not allowed on airplanes.

The U.S. Department of Transportation has classified lithium-ion batteries as "hazardous materials."

Shipping lithium-ion batteries is also heavily regulated (one of the stipulations is that they must be at least 70% discharged prior to shipping), with violations punishable by a civil fine of up to $27,000 per offense.

In some ways, live ammunition is less controlled than lithium batteries, which leads to the obvious question: What's going to happen when the world multiplies its total lithium-ion capacity by a factor of three or a factor of five, as is expected to happen by the end of the decade? 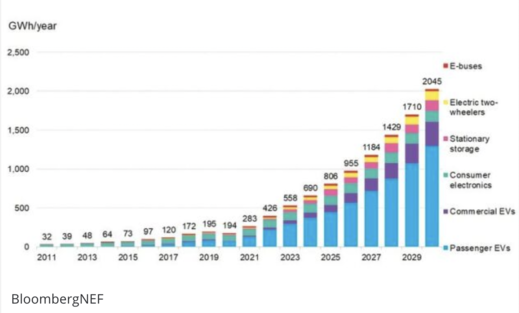 The answer is an equal growth in the incidence rate of catastrophes, ranging in size from small ones, sparked by things like phones and laptops, all the way up to the larger, headline-grabbing incidents involving $100,000 EVs.

These projections are news to nobody in any of the applicable industries. From the executives at Apple and Samsung to Elon Musk himself, everyone with a dog in the fight for distributed energy storage understands the shortcomings of lithium and the potential problems we're going to face as we become more and more dependent on batteries.

Up to this point, making lithium-ion batteries better has been the approach. Over the years, they've become more reliable, quicker to charge, and more voluminous in terms of capacity.

But we've reached a limit. The technology has been thoroughly optimized, tweaked, and perfected, so moving forward, improvements will be incremental at best.

As you read this, a company based in the northeastern Australian state of Queensland is producing a battery with a graphene cathode.

Graphene, aside from being perhaps the most technologically advanced material invented in the last half-century, does not require mining and refining the way lithium does.

It can now be created cheaply, in mass quantities, to exact specifications, right in this company's production facility in Brisbane, using nothing more than natural gas and electricity.

The resulting batteries have twice the capacity, three times the service life, and up to 70 times the charge speed of cutting-edge lithium-ion equivalents.

Tomorrow's Batteries Are Already Rolling off the Assembly Lines

Of all those numbers, it's the charge speed that should stand out. Charge delay has been, and remains the No. 1 hurdle for prospective EV buyers.

Cut that charge time down to less than a minute and the entire market changes — and that's before we get into the other benefits.

Imagine going 1,000 miles per charge. Imagine driving over 1 million miles between new battery packs. Imagine never having to worry about overheating or spontaneous combustion ever again.

That's what this company and its new batteries promise the electron-driven world of tomorrow.

To put this into historical context, if lithium is coal, then this new battery represents high-octane jet fuel.

The company behind all this is already manufacturing commercial samples of this new battery for testing and evaluation by potential corporate clients. They started with coin and pouch batteries, but soon enough, large-scale battery packs like the kind that drive electric cars will be on the menu.

The End of Lithium?

If all goes according to plan, the lithium-ion market that's expected to be worth $200 billion per year by the end of the decade might end up with a market capitalization closer to $0.

This firm is publicly traded already, though the story is so fresh that few retail investors even know the ticker symbol.

But if you think that every EV-maker on the planet isn't watching this story with baited breath, you're going to be disappointed.

This is a sleeper stock if I've ever seen one, and perhaps the biggest bargain trading anywhere on the public markets today.

The background info alone is enough to fill pages, so to make things easy for any potential investors, I put together a quick informational video to explain things efficiently.

It's free to watch, with no registration required. Just click and view, and feel free to forward it to your friends.

Take your time, or act now, but don't expect this story to stay a secret for too much longer.