You Have 92 Days Left Before Gold is Money

It is always a good idea to front-run the Fed.

Here at Wealth Daily, we've been pushing physical gold and silver hard ever since the charts showed a breakout back in late spring...

Gold was moving because Bernanke told us he was going to destroy the U.S. dollar. We believed him. 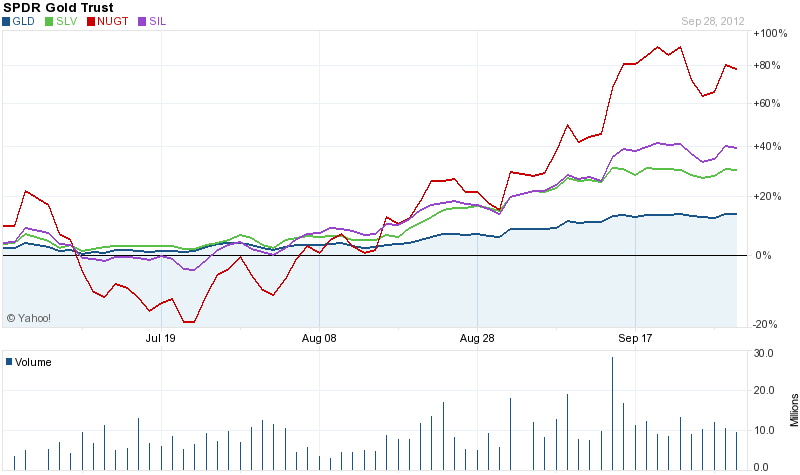 And though it is true gold stocks have been running hard, gold and silver miners have been up more. Note the red line.

In my trading service, Crisis & Opportunity, readers like you banked 62% in two months on the 3x Gold Miners ETF (NYSE: NUGT)...

I sold on Friday and will get back in on a dip or a breakout. I plan on buying precious metals every month until Bernanke stops printing.

Furthermore, we will walk down the value chain from physical to producers to explorers as the risk gets bought up.

A year ago July Ron Paul faced off against Ben Bernanke in Congress.

Paul badgered Bernanke into answering the question of whether gold is money, to which Benjamin flatly responded, “No.”

“When you wake up in the morning, do you think about the price of gold,” Rep. Paul asked.

After pausing for a second, Bernanke responded, clearly uncomfortable. that he paid much attention to the price of gold, only to be interrupted once again.

“Gold’s at about $1,580 [an ounce] this morning, what do you think of the price of gold?” asked Rep. Paul. A stern-faced Bernanke responded people bought it for protection and was once again cut-off, with Ron Paul once again on the offensive.

“Is gold money?” he asked. Clearly bothered, Bernanke told the representative, “No. It’s a precious metal.”

After Paul interrupted him to note the long history of gold being used as money, Bernanke continued, “It’s an asset. Would you say Treasury bills are money? I don’t think they’re money either but they’re a financial asset.”

Paul asked Bernanke why central banks didn’t hold diamonds, clearly hinting at his fiat money criticism of the U.S. monetary system. The Fed Chairman told Rep. Paul it was nothing more than tradition...”

Ben Is Wrong: Gold Is Money

This exchange fired up those of us who believe you can't print you way out of a debt crisis — as well as anyone who has read books like The Power of Gold by Peter Bernstein.

Since this conversation with Ron Paul, Helicopter Ben has printed more money.

Furthermore, he says he will print more money every month until morale improves — or the U.S. devolves into a post-apocalyptic society, whichever comes first.

But what no one is talking about is that Ben is wrong.

Gold is money... and it is becoming increasingly acknowledged as such every day.

Last year the Chairman of the Federal Reserve told me that gold is not money, a position which central banks, governments, and mainstream economists have claimed is the consensus for decades.

But lately there have been some high-profile defections from that consensus.  As Forbes recently reported, the president of the Bundesbank (Germany’s central bank) and two highly-respected analysts at Deutsche Bank have praised gold as good money.

Why is gold good money?

Because it possesses all the monetary properties that the market demands: it is divisible, portable, recognizable and, most importantly, scarce — making it a stable store of value. It is all things the market needs good money to be and has been recognized as such throughout history.  Gold rose to nearly $1800 an ounce after the Fed’s most recent round of quantitative easing because the people know that gold is money when fiat money fails.

Central bankers recognize this too, even if they officially deny it. Some analysts have speculated that the International Monetary Fund’s real clout is due to its large holdings of gold. And central banks around the world have increased their gold holdings over the last year, especially in emerging market economies trying to protect themselves from the collapse of Western fiat currencies.

The defamation of gold wrought by central banks and governments is because gold exposes the devaluation of fiat currencies and the flawed policies of government. Governments hate gold because the people cannot be fooled by it.

The Rich Will Always Be Among Us

You can't print gold. You can't fool the great unwashed by saying it is what it isn't.

Bernanke knows this, as do central bankers around the world.

Sure, in public the bankers are all-in, pushing hard on the money printing, quantitative easing, and the bailouts...

But back in their secretive world of high-powered meetings, they're doing something else.

It might come as a surprise to you that a recent meeting of a secretive international club in Basel, Switzerland, puked out a list of new banking rules. These rules, called the Basel III, will force changes in what banks around the world call “money.”

You see, bankers know all that bad debt floating around as bits and electrons in the form of bundled mortgages, sovereign debt, and derivatives isn't really secure. There is no there there.

That's why the top bankers have proposed new rules — the Basel III rules — to make collateral more secure and reduce this risk for loans.

Part of this means they are going to rerate gold from a Tier 3 asset to a Tier 1 asset beginning as soon as January 1, 2013.

In other words, gold will be equal to T-bills in terms of leverage. This means banks can lend more money against gold and make a higher profit. Twice as much, in fact.

Plus banks want to own gold because it is just common sense that all major central banks are printing money like crazy.

Why wouldn't gold be equal to or even above a U.S. Treasury?

It's no surprise then that the gold-rich Commonwealth Bank of Australia just announced that it's the first to offer a Basel III Tier 1 bond.

Time is running out...

You can still buy gold in three months. It will just cost a lot more.

My report reveals three ways you can make 670% on this massive change to money.