Could Beyond Meat Be the Future for the Meat Industry?

Imagine if I told you that you could have a burger that tastes, feels, and even bleeds like an animal-based burger but that is actually made from plants.

You’d probably think I was crazy. There’s no way a plant-based burger could taste, feel, and look like the burgers you’re used to.

The vegetarian and vegan market isn’t new, but it has grown in the last few years. Americans have grown to realize the food we eat makes a huge difference in our lives, both physically and mentally. But altering the eating habits you’ve known throughout your entire life proves to be very difficult, not to mention that your wallet will be affected by this change in lifestyle.

But staying in that mindset isn’t the best for our health, which is why Beyond Meat wants to change how we think about the meat industry while still delivering the experience we’re familiar with. 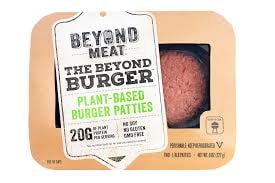 A Shift Toward Healthier Options

The food industry has remained largely the same. It’s a huge industry with a lot of key players who have dominated. There hasn’t really been a company that’s been able to compete with it.

Vegetarian and vegan options don’t entirely compete with the meat industry because if you’re on a vegetarian or vegan diet, you have no desire for meat products. But if you eat animal-based products and you could get a burger that tastes, feels, and looks like a beef burger, then there’s some competition — especially if you can’t tell the difference between the animal- and plant-based products and both products are around the same price point.

I eat animal products, and if I were at the grocery store and could get a product that resembles meat but that was healthier, there’s no doubt in my mind that I would get the healthier option. This is how Beyond Meat will disrupt the meat industry. It’s not only focused on specific plant-based diet consumers, but it also wants people who choose to eat meat to have another more nutritional option.

As I mentioned before, our society has been shifting toward being more conscious of how our food is delivered to us and where it comes from. More Americans want to take control or are shifting their trust to companies that provide nutritional and safe handling of food products.

Who is Beyond Meat?

Beyond Meat is based in El Segundo, California. It was founded 10 years ago by tech entrepreneur Ethan Brown. The goal Brown has set for Beyond Meat is to recreate meat with plant-based inputs.

He said in an interview, “We don’t want you to walk away from meat, we’re just taking animals out of the equations.” Also in the interview he cited a statistic that shows 70 million Americans are reducing their intake of meat. The shift has already been happening, and Beyond Meat has recognized it and is taking full advantage.

Already we’re seeing burgers with “fake” meat getting incorporated into menus across America. Beyond Meat products are now available at 30,000 outlets in the U.S. and overseas, including at chains like Carl’s Jr. and T.G.I. Friday’s. You can also find Beyond Meat’s products at a grocery store near you, including at Whole Foods, Kroger, and Target.

Even high-profile investors like Bill Gates, Leonardo DiCaprio, and Tyson Foods have invested in Beyond Meat. Dan Altschuler Malek, a venture capital partner at New Crop Capital and an early investor in Beyond Meat, said:

We believe the global food system is broken and one of the contributors is animal agriculture which has caused significant damage to the environment.

Choosing a plant-based diet will not only benefit your health but ultimately help revert the damage that has been done to the environment from the meat industry and the way it has conducted its business for decades.

Brown said in a letter in the company's prospectus:

Livestock emerged as a major contributor of greenhouse gas emissions, with related burdens on land, energy, and water.

He went on further to say:

At Beyond Meat, we take these constituent parts directly from plants, and together with water, organize them following the basic architecture of animal-based meat. We bypass the animal, agriculture’s greatest bottleneck.

What Beyond Meat and Ethan Brown has been able to create over the last decade is life changing, and its products could very well become a huge part of our daily lives and diets.

The company reported revenue in 2018 of $87.9 million and a net loss of $29.9 million. Its revenue has been able to grow over the years, but it still has been unable to produce a profit. However, going public could be what it needs to start making a profit.

Beyond Meat is expected to go public this week on Thursday, May 2. It plans to start trading on the Nasdaq under the symbol “BYND.” Its expected offer price is between $19 and $21 per share. It hopes to raise $183.9 million from its IPO.

The underwriters involved with Beyond Meat’s offering are Goldman Sachs, JP Morgan, and Credit Suisse. The company plans to use the proceeds to invest in current and additional manufacturing facilities, research and development, and sales and marketing.

The company may have some ambitious plans for the future to have consumers rethink meat products and eventually choose plant-based products. Beyond Meat has the opportunity to snag a huge market share of the $1.4 trillion global market for meat. If it is able to do this, it will be huge for the company and the investors who got in at the early stages.