Corona Crash: A Few Things Every Investor Should Know

At this point, you don’t need me or anyone else to tell you that the sky is falling.

You’ve already seen the headlines and heard the alarm bells loud and clear: We’ve officially broken into bear market territory, with major U.S. indices down more than 25% from their most recent peak.

Here’s a snapshot of the stock market year to date: 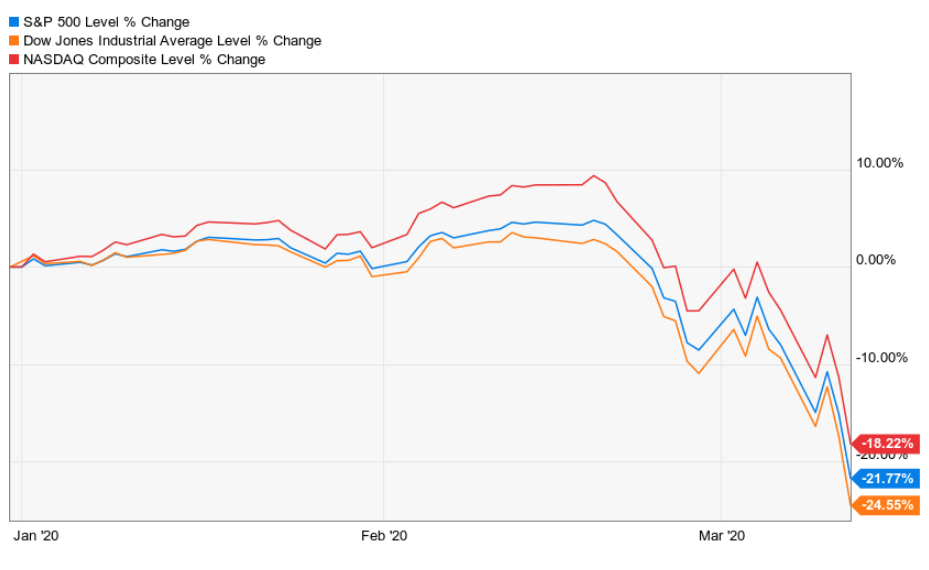 And here’s a wider one of the record-long bull market that began in 2009 and finally broke this week: 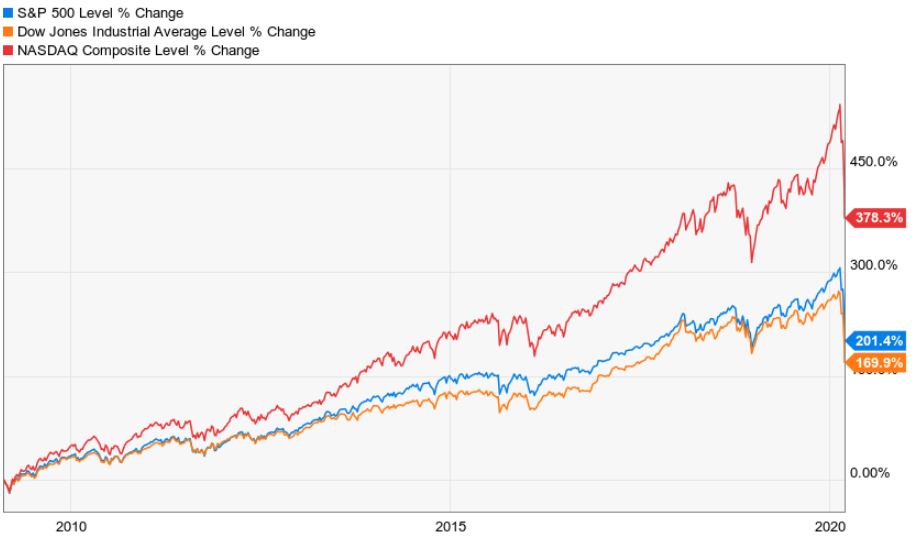 It helps to have a bit of perspective in times like these, when everyone is running around like a bunch of chickens with their heads cut off. Looking at the chart above, this looks like a healthy correction of what’s been a wild, unchecked, and runaway stock market.

Conventional investment wisdom tells us to take this opportunity and pick up shares during this massive discount. Minus a few momentary dips, stocks haven’t been this cheap since 2017, so depending on your reference point, equities could be considered a bargain right now.

That said, we are currently in the midst of a global contagion that looks to be accelerating at an exponential rate. And no, I’m not talking about the novel 2019 coronavirus outbreak; I’m talking about something far more dangerous and far more contagious: fear.

As I write this, consider that there have been, in total, 127,863 confirmed cases of COVID-19 across the world. That amounts to a mere 0.0017% of the global population having been infected.

Now compare this to the number of people who have already been infected with fear. Virtually every single person on earth who hasn’t been hiding under a rock is currently concerned over what the World Health Organization has officially declared a pandemic.

To be completely clear, I don’t mean to suggest that coronavirus isn’t a serious health threat, that it's “just like the flu,” or that you shouldn’t wash your hands and take precautions…

I am suggesting, however, that fear is far more dangerous, and that there is something amiss here in terms of where our attention is focused right now and how we are reacting.

Could it be that the mainstream media is drumming up fear and milking this tragedy for all the ad revenue it's worth?

Could it be that politicians and political pundits are seeking to leverage the renegade virus to their advantage?

My gut tells me that both of these things are happening. My gut also tells me, though, that these antics aren’t going to let up anytime soon.

Now, before anyone lambasts me for not taking COVID-19 seriously enough, consider the following...

By Any Means Necessary?

Back in 2011, Columbia University ran a research study to determine how many U.S. deaths are caused every year by poverty. They declared that the “numbers are in the same range as deaths from heart attacks and stroke.”

All told, roughly 133,000 deaths a year are attributable to individual-level poverty in the U.S. alone. Simply put, a damaged economy can kill.

Now consider the impact of coronavirus panic. U.S. equities have been slashed by a fourth and we now face the threat of a worldwide recession, with disruptions in supply chains and trade across the globe.

Already, companies are cutting down on hiring. As Diane Swonk, chief economist at Grant Thornton, puts it, the employment fallout is “going to get very large, very rapidly.”

You see, as easy as it is to get tied up in calls for precautionary measures, the reality is that everything is a trade-off. We could, theoretically, decide as a global community to all hunker down and self-quarantine for the next two weeks and shut this thing down for good, but would the ripple effects be worth it?

President Trump has faced a lot of pushback already for his steadfast focus on the economy during this outbreak. Unsurprisingly, his opponents have turned this against him, the argument being that Trump only cares about the stock market and not people’s lives.

But those who dismiss the economic impact of us all cowering in solitude are missing a whole lot of nuance. It’s not callous or cold to want to keep the economy booming because, at the end of the day, everyone needs to put food on the table and a roof over their heads to survive.

No doubt, our medical system needs to be prepared for the continued (and likely accelerated) proliferation of COVID-19. At the same time, the rest of the world would be wise to carry on as usual, with some extra hand washing in between.

If the media continues to milk this, though (as I expect it will) panic will only continue to spread, and people will react accordingly. Schools and businesses will shut down in increasing numbers, the economy will slow, and people will suffer in far greater numbers than is ultimately necessary.

As for the silver lining here, it’s the opportunity that’s going to present itself through this very panic. Investors are going to be presented with heavy stock discounts and fast-paced shorting opportunities because of this virus; there is no doubt.

Simply put, now is not the time to bury your head in the sand. If you do, you’re going to miss one of the greatest money-making opportunities in history.