Remember just two or three years back when dozens upon dozens of copper statues in public squares around the world would suddenly vanish over night? The high price of copper at the time gave thieves all the nerve they needed to make some fast money from the metal – anywhere they could get it.

Well get the security guards back to their posts, because the price of copper is once again on the rise. And this time, it could very well take out that all-time intraday high of $4.7075 per pound set on February 7th, 2011.

Let’s see what all the fuss with copper is about, and get a feel for what its price has been doing lately. 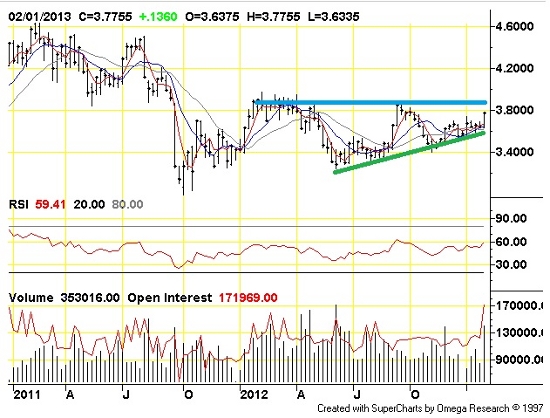 As can be seen in the chart above, since June of 2012 the price of copper has been well supported by a trend line of rising lows (green). Yet since the spring of 2012, the metal has been unable to clear a stubborn ceiling around the mid $3.80’s per pound (blue).

The price is bouncing between a flat resistance and rising support like a ping pong ball. At some point that ball is going to have so much energy stored within it that it will simply punch right through one of those barriers.

Which barrier the price ultimately punches through remains to be seen, though expectations are being adjusted higher. SteelGuru quoting Reuters reports:

“HSBC has raised its 2013 copper price forecast saying it expects positive sentiment to drive prices for the metal in a structurally balanced market. The bank lifted its 2013 forecast for the average cash copper price to USD 8,000 per tonne from USD 7,500 to reflect the metal’s relatively good start to the year.”

According to Bloomberg, investors too are upbeat over the metal:

“The market value of the only physical copper-backed exchange-traded product nearly tripled in a month… The value of assets held in ETF Securities’ physical exchange-traded copper fund rose to $48.8 million today from $16.4 million a month earlier.”

So why all this excitement around copper? Because economies around the world are showing signs, albeit small signs, of recovery.

And the beginning of a recovery sees the awakening of one very powerful sector… construction.

According to Wikipedia, “The major applications of copper are in electrical wires (60%), roofing and plumbing (20%) and industrial machinery (15%).” As goes construction, so goes copper.

ETF Securities head of research and investment strategy, Nicholas Brooks, explained to Bloomberg in the above cited report:

Figures out of the US last Friday, February 1st, showed a strong manufacturing PMI of 55.8, well in expansion territory. On the other side of the globe came more of the same, as China’s manufacturing sector enjoyed its fourth consecutive month of expansion.

Excited investors reacted to these reports with enthusiasm. “Last week we saw very strong inflows again into the broad industrial metals and copper,” continued Nicholas Brooks. “This trend appears to be continuing.”

“Yes, but…” some may contend. “Rising prices will bring more of the metal onto the market and ultimately dampen continued price increases.” (Not to mention all copper statues still remain standing in the world’s public squares!)

Well let’s see what is happening with the world’s leading copper producer, Chile’s Codelco, which accounts for over 20% of global copper production…

SteelGuru reports that although “Chile is seen producing 5.596 million tonnes of copper this year, up 3% from 2012 levels”, “analysts have warned that several factors - deteriorating ore grades, delays to key energy and mining projects, and operational woes - threaten forecast production jumps.”

Further hurting the supply side are depleting above-ground copper stores—notably a reduction in China, the world’s largest consumer of the metal.

The above referenced Bloomberg report noted that “Copper stockpiles monitored by the Shanghai exchange dropped last week to the lowest level in two months.” And “inventories fell for a third week, losing 8,029 tons to 197,091 tons, data from the bourse showed on Feb. 1.”

It wasn’t many quarters ago when everyone marvelled at how China just kept stockpiling copper and other resources. China knew a recovery would come some day.

Well, that some day seems to be here. And copper looks poised to be carried along for what just may be the greatest ride of its life. Let’s just hope it’s not on the back of a copper horse from the public square.