In case you didn’t know, there’s an energy crisis growing in Europe.

But if you only pay attention to the mainstream media, you wouldn’t have any idea how bad it is or how bad it’s going to get.

That’s because it’s the policies championed by the media and their favorite politicians that are causing the crisis.

And it’s because the energy crisis isn’t the worst one those politicians have caused.

You see, the energy crisis is leading to a compounding of another crisis that’s also been widely ignored by the traditional press…

You see, energy prices in Europe are incredibly high. How high? 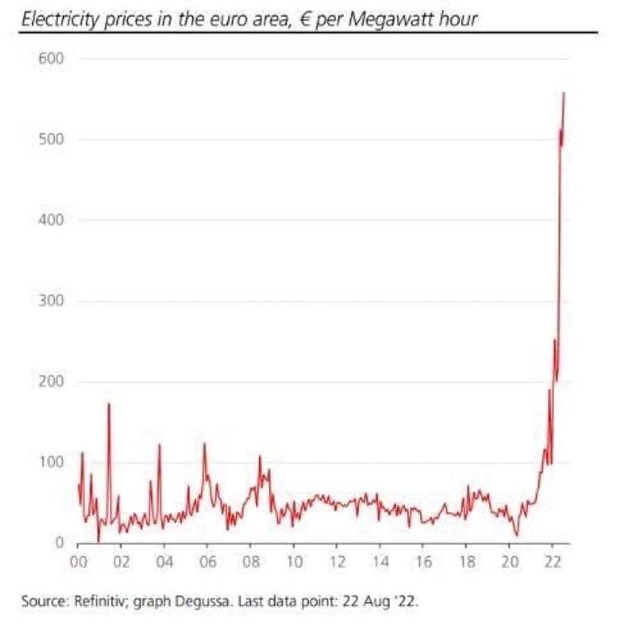 To put that into perspective: Imagine if your $250 a month electric bill suddenly cost $2,750.

That’s about the cost of renting another apartment or paying a second mortgage.

And it’s not just consumers that are suffering. Businesses are too. And it’s leading to them shutting down operations.

And the businesses shutting down are some very important ones, the most important being the fertilizer plants.

The vast majority of nitrogen-based fertilizer is created through the Haber-Bosch process.

I won’t get into the nitty-gritty of how it’s made, but it requires burning natural gas.

And natural gas is both expensive and evil (at least according to the politicians who made the decisions that led to the energy crisis).

The politicians don’t want to burn it. And now the companies can’t afford to burn it.

Half the Planet Would STARVE

Without the use of fertilizers, we can’t produce enough food to feed the world’s current population, let alone its future population.

Currently, about 50% of the people on Earth rely on food grown with fertilizers. Without fertilizers, half of us would starve to death. 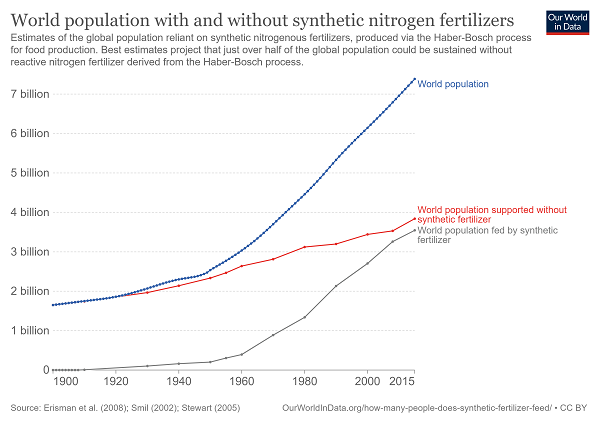 And because of the energy crisis in Europe and the war in Ukraine (Russia produces about a third of the phosphate fertilizer in the world), the planet is running low on fertilizers.

That’s a world that’s been on the brink of starvation for decades anyway.

Food prices were on the rise long before Russia invaded Ukraine or the Europeans stopped making as much fertilizer.

All of those things were already cutting into the world’s supply of food.

According to the U.N., nearly one-third of the global population was already facing food insecurity in 2021.

The energy crisis in Europe and the war in Ukraine are only compounding the issue even further.

And that’s caused what the U.N. describes as “an unprecedented global hunger crisis.”

Private Industry to the Rescue

It’s not a pretty picture, and it gets uglier the longer you look at it. But there may be a glimmer of hope behind all those storm clouds…

You see, the world has always been on the brink of starvation. Our population is constantly growing.

And we’re constantly coming up with new ways to feed that steadily growing number of people.

Fertilizers were the biggest step forward in history. Genetically modified (GM) crops that can withstand disease, droughts, flooding, and pests were another.

Advances in modern framing have allowed us to keep the food supply growing along with the population.

And I don’t think that history of solving problems ends with this generation.

In fact, I’m convinced we’re about to see some of the biggest developments in the history of the global food chain.

And the reason I’m so sure of that is because I’ve been researching this growing crisis for years.

And I’ve also been following the companies and researchers working on solutions.

I’ve studied the history of the food industry.

I’ve seen how companies that addressed crises in their times became behemoths of their industry.

And I’ve pinpointed a handful of companies that are poised to solve the current global food crisis.

I wasn’t the first to catch on to the incredible potential these operations had.

A group of experts in the food industry with a history of disrupting the way things are done were.

And while they saw value in the operations, they realized this was a situation in which the whole would be worth far more than just the sum of the parts.

So these experts went to work consolidating the companies under one umbrella so that they could play off each other’s efficiencies and grow even faster.

And now, they’ve created what I like to call the biggest company nobody’s ever heard of.

But that’s not going to last.

Because the products this company sells and the technology this company developed are already helping some of the biggest names in the food business stay on top.

They’re also featured on the shelves of Walmart, H-E-B, Costco, and Kroger, just to name a few.

But the products and the company that make them go by different names, so investors haven’t figured out just how BIG this operation already is.

And that creates an opportunity for investors who can look past the trees and see the forest as a whole.

Because, while this company is steadily setting new records for revenues, its stock is still languishing under a dollar a share.

But as word gets out that these brands and this new technology all come from the same place, investors are going to flood the market with bids to buy its stock.

And I can see it shooting from under $1 to over $10 as the rally takes hold.

So I wanted to share it with you before the rank-and-file world finds out and takes shares to the moon.

I hope you take advantage of this incredible opportunity.

I’m pretty sure this tiny company is going to be a giant very soon.

And early investors are going to be very well rewarded for their insight.

So check out my report today and see if you agree.