Plus: Two China Gold Stocks Under $2

The Chinese saw the writing on the wall over a decade ago.

They realized the ultimate fate of the U.S. dollar and the fiat currency system.

So in 2003, the government of China began an aggressive campaign to secure resources of gold.

While boosting reserves, the Chinese government also began to deregulate the gold mining industry and invite foreign investment for the development of domestic resources. The measures were a runaway success; China is now the world's largest gold producer with output increasing 70% in the past decade.

Chinese government even began encouraging its 1.3 billion citizens to own gold. And today, the country has become the second-largest consumer of gold in the world.

The government's efforts to stimulate and expand the domestic gold market has been highly successful. Chinese citizens have embraced gold as true wealth in all economic seasons.

And now new concerns over the future of the U.S. dollar and domestic inflation has prompted the Chinese to recently begin acquiring gold on a epic scale.

And even though China is the world's #1 producer, the country is expected to import 9.2 million ounces of gold this year as inflation concerns lifts investment demand.

Consumer prices in China rose 4.4% in October — the fastest pace in two years — and above the government's full-year target of 3.0%.

The People's Bank of China hiked up interest rates in October for the first time since 2007 and ordered banks last month to hold more money in reserve.

Albert Cheng, managing director of the World Gold Council's Far East department, said at a recent conference in Shanghai that China's gold investment demand may reach 150 tons this year — a 42.9% increase compared to 2009.

Gold demand growth in China will continue to be fundamentally supported by infrastructural development that's reaching break-neck speed in some parts of the nation.

This rapid development has created a large middle class with rising disposable income levels. And the Chinese people are well-known earnest savers...

And with the Chinese now realizing gold is the only real universal store of value, investment demand in China is soaring.

China National Gold Group Corp. reported sales of gold bullion bars jumped 40% in the first half of the year. The state company said that over 70% of the bullion sold was mini-gold bars, which Chinese investors like to hold.

In August, Deutsche Bank said China could surpass India as the world's biggest gold bullion consumer in 2011. Dozens of companies are already working to quickly develop new gold projects to supply the Chinese feeding frenzy for the yellow metal.

Here are two companies that are quickly developing gold projects in China...

Minco Gold is a junior gold exploration company focused on the development of high-grade, advanced-stage gold projects in the Chinese provinces of Hunan, Gansu, Guangdong, and Inner Mongolia.

The project is fortunate to be situated close to well established water, power, and transportation infrastructure.

An independent resource estimate for the Changkeng gold project was calculated in 2009. Based on diamond drill data from a total of 127 drill holes and 13 surface trenches, a report estimated the Changkeng project to contain 623,100 ounces of indicated gold resources and 386,800 ounce of inferred resources. 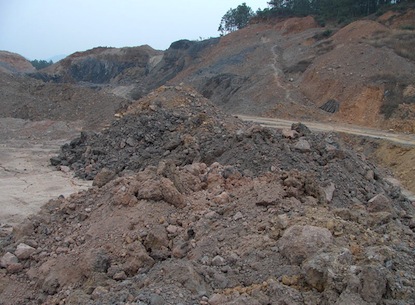 Minco Gold has two other gold exploration projects in China — including the 100% owned Yejiaba property, part of the Longnan Project, located in Gansu Province.

The company recently announced the results from this year's exploration program consisting of geochemical, geophysical, and trenching programs that have been completed at the Yejiaba project.

The geochemical soil sampling highlighted numerous gold anomalies over an area of 700 meters long by 150 meters wide. The anomalies are open along strike to the east.

A trenching program was conducted to follow up the gold soil anomaly. Channel sampling from trenches returned high-grade gold values up to 5.58 grams per tonne (g/t) over 4.7 meters and 3.65 g/t over 4.3 meters.

A recently published NI 43-101-compliant update estimates the Dachang Gold Project contains 1.88 million ounces of gold in the Measured and Indicated resource category, and 1.51 million ounces in the Inferred category.

Overall, the Dachang gold deposit is modeled to produce 165,000 ounces of gold annually for nine years.

Inter-Citic is currently drilling 25,000 meters into several new gold exploration targets. This year's exploration program is geared to expand the company's resource base and firm up final production models. Meanwhile, Inter-Citic continues to advance the feasibility and permitting processes for the Dachang mine.

The company's success has already attracted the attention of major mining investment firms, including the Zijin Mining Group — China's largest gold producer with over 2.5 million ounces of annual output. With a market cap of over $20 billion, Zijin recently acquired 19.15% of Inter-Citic.

Other investors include two Hong Kong tycoon families, who own approximately 30% of the company.

The final act for fiat currencies?

As world governments pump more money into the global system, the value of fiat currencies is rapidly being extinguished.

Global gold investment demand last year exceeded jewelry consumption for the first time in three decades. And investors in China and around the world will continue to buy gold over inflation concerns and the depreciation fiat currencies.

This demand will be a major driver for world gold prices in 2011, and may lift the share prices of companies exploring and developing new resources in China.