Singapore wanted the conference — and dropped sales tax on gold — but lost out. Hong Kong is the gateway to China, after all... and China is where all the gold is flowing.

The demand for gold has been growing at around 24% per annum since 2007.

China's share of global demand has doubled from 10% in 2007 to 21% in 2011 and, as you can see from the chart, China recently overtook India as the number one destination of gold: 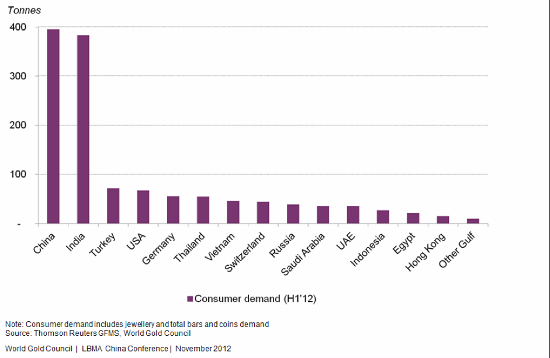 China is actively seeking to change the U.S. dollar from the reserve currency of the world. The Middle Kingdom has set up direct currency deals with Japan, Russia, Brazil, and Indonesia. They are also in talks with Australia.

According to the Global Times:

China has been taking steps to internationalize the yuan, facilitating the use of the yuan in cross-border trading and investment, and signing currency swap agreements worth at least 1.5 trillion yuan (238 billion US dollars) with a dozen of countries.

Cutting the greenback out as the middle man for trade is one thing; but in order to increase the viability of the Chinese yuan, the country needs to free its currency from its dollar peg.

For those who don't know, many emerging market countries link their currency to the U.S. dollar for trade stability.

The downside is that when a country matures, it is subject to the whims of Ben Bernanke and his ilk.

Yesterday the UK's Telegraph reported the days of the yuan/dollar peg are coming to a close:

At the annual session of the legislative National People’s Congress in Beijing, Zhou Xiaochuan, governor of the People’s Bank of China, said that the days of the “special yuan” policy were numbered. He described the dollar peg as a “temporary” response to the global financial crisis, but gave no timescale for any change in policy.

The currency has been pegged at about 6.83 yuan per dollar since July 2008.

To free itself of dollar domination, the Chinese want to rely on their own monetary system.

One step they have taken is to strengthen the Shanghai Gold Exchange and transform it into a true competitor of London. They are working towards this.

They also need to add more gold to their currency reserves... a lot more gold.

Currently, two-thirds of its $3.29 trillion in foreign currency reserves are in dollar-dominated products.

China is the largest foreign holder of U.S. debt, but less than 2% of their reserves are in gold. Now they are rushing to turn those paper-backed IOUs into gold while they can still get someone to make the trade.

When comparing China to the U.S., it would seem that in China, gold asset allocation can only go in one direction. The country has only 2% of its reserves in the form of gold compared with the U.S. at 75%.

Prices have recently been supported by official sector buying. Will the gap between the amount of gold held in reserve by the developing markets and that of the developed world close?

In order for China to achieve its goals, they must own more gold.

But they aren't the only central bank seeking to hoard the yellow metal...

On the one hand, central banks around the world are printing money, cutting interest rates, and coughing up stimulus plans. On the other hand, they are buying up gold for the day when it's revealed their currencies are in trouble.

And it's not just China and India. Brazil, South Korea, and Russia have been buying gold this year. The International Monetary Fund's data shows nations bought 254.2 tons in the first half of 2012 and may add close to 500 tons overall. This beats the 456 tons added to central reserves in 2011.

The United States holds the most gold — totaling 8,133.5 tons, or 76.6% of reserves. What's interesting is that Uncle Sam got a large chuck of this gold through theft.

In 1933 our first socialist president, FDR, signed Executive Order 6102. This made holding monetary gold by an individual a criminal offense with punishment of up to 10 years in jail.

FDR bought the gold from the citizens at $20.67 an ounce. A year later, after building Fort Knox, he raised the price of gold to $35 an ounce.

Germany is the world's the second biggest holder with 3,395.5 tons, representing 73.9% of reserves.

Again, China has a mere 1.8% of its reserves in gold and strong desires to run with the big boys in the currency game...

There is but one choice: China must buy gold.

I'll let you speculate on the ramifications...