The “flippers” are back — and they're Chinese.

Real estate “investors” with no experience, limited knowledge, and no understanding of leverage are making fortunes in one of the hottest real estate markets in the world.

But this housing bubble is hiding a much bigger trend that will affect you and your family’s wealth for years to come.

Your editor has spent the past week in Vancouver.

In the summertime, there’s not a better city in the world to spend time in. The rest of the year, however, steady rain and ever-present clouds make it one of the most depressing places to be.

Right now, British Columbia — along with the rest of Canada — is in the midst of a major real estate bubble. It’s ridiculous. There have been reports of 100% profits in as few as four months on some of the most sought-after real estate.

It’s worse than the U.S. real estate bubble, and it will end just as badly.

But what's driving it is the critical thing here.

I’ve been staying in an apartment in one of the newest buildings in the city, the Fairmont Pacific Rim hotel. A room here will set you back at least $500 a night during the peak summer season (if one is even available).

I’m staying in the residential part of the hotel. And it’s the epitome of a real estate bubble.

My place is a two-bedroom, 2,000 square foot condominium.

Don’t get me wrong, it’s nice. The shower has seven heads, the blinds go up and down via remote control, the view is tremendous... 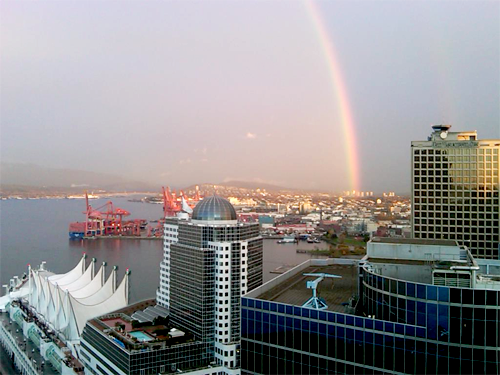 But it’s not as nice as the numbers make it out to be.

You see, this condo was originally bought for $3.2 million. The mortgage on that would be about $18,000 a year at current interest rates. And it’s a condo, so there are all kinds of other fees and costs on top of that. The monthly fees exceed $1,500. The taxes are a few hundred dollars a month, too.

All in all, the cost of owning it is about $20,000 a month in what real estate analysts call Owner’s Equivalent Rent (OER).

The rent, meanwhile, is a relatively small $5,000 a month. So the price-to-rent ratio — a key indicator of real estate values — is an astonishing four to one.

Cleary, Canada is in a real estate bubble. It’s widely known. There are at least three websites completely devoted to tracking it.

The important thing in all of this is what is driving it — and why it will affect you and me.

It Really is Different Here

When you ask local Vancouverites about real estate prices, they are filled with the same bubble-speak we’ve all heard before:

But I do agree with one point they often bring up, which makes Vancouver and much of Canada different in a very important way.

Chinese citizens have become among the largest group of buyers of real estate in Vancouver over the last few years. The Wall Street Journal recently reported: “Canadian and Chinese agents say Chinese buyers are looking for longer-term investments to diversify their holdings outside of the mainland.”

And they’re right. The Chinese want to get their money out of China. And that’s the critical point that will affect you, me, and our financial futures.

A Value at Any Price

The Chinese are buying up international property largely because it’s the only way they can get money out of the country.

There are so many rules governing Chinese citizens and their money. They can’t have money in foreign bank accounts... They can only leave the country with a limited amount of cash... In short, they have very few options by which to shield their money from the Chinese government.

The only reasonable way for most wealthy people in China to get money out of the country is to buy property.

And it’s why they are willing to pay absolutely absurd prices. They may pay $3 million for a place that’s really worth $1 million because the real value is not in making money on the property or having a stable income from renters; it’s in having money out of China, the modern equivalent of an insurance policy on their own financial freedom.

The Chinese government may take their factories, homes, bank accounts, and everything they own on a bureaucrat’s whim. And they can do it for the “greater good” or any other sudden and unexpected reason. But the government can’t take their international property holdings.

The Chinese aren’t just buying a summer home. They’re buying a ticket to freedom if they ever need to exercise it.

And that’s why the Chinese are seeing a value at any price.

What’s happening to the Chinese can and will happen in the United States.

In fact, the necessary regulatory tools are already being put in place. The 2,319-page Dodd-Frank Wall Street Reform Bill contains all sorts of additional powers. These include additional regulations on foreign banks, which hold Americans' money. They are essentially trying to turn foreign banks into a tax collector for the U.S. government.

But the worst is yet to come. When the next crisis hits and the dollar finally tanks, we’re going to see the exact same thing the Chinese are experiencing now.

There will be extreme currency controls, fixed international exchange rates, and other moves which will not be good for the U.S. economy — and which will put your own financial freedom in peril.

A Small Piece of the Puzzle

Although the prospect of currency controls is a scary thought, this is just part of a much bigger picture that’s coming together. As we’ve said before, we’ve entered a period of financial repression. And we’re going to be paying the economically disastrous price — inflation, reduced economic growth, high unemployment, declining business investment, negative real interest rates, low yields...

We’re not trying to be the doom and gloomers here. There will be ample opportunity to make and lose fortunes throughout the entire era of financial repression.

The Vancouver real estate bubble is a perfect example. If it weren’t for the Chinese trying to get one foot out of their own country, the prices would likely be half of what they are today.

Financial repression creates massive dislocations in markets around the world.

Fortunes will be made by those of us who can spot these dislocations and what’s really driving them...

And by being prepared for what’s coming and understanding what is going on around the world, you can ensure your fortune stays where it belongs — in your own hands.