While the American housing market is recovering from its flu, Canada’s may be showing symptoms of its own. 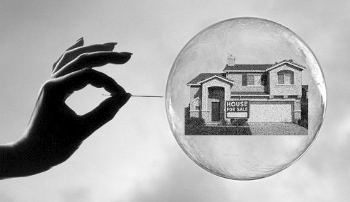 The Organization for Economic Co-operation and Development – an international economic forum where 34 member countries compare and consider free market policies and practices – has this week rated Canada’s housing market the third most overvalued in the world, just behind Belgium and Norway.  More alarming still, the organization has put the Canadian housing market on its watch-list as one of those most vulnerable to correct.

It has been 5 years since the American housing market sneezed.  Has Canada finally caught its cold?

This spring upheld its reputation as Canada’s most active home buying season.  The Teranet-National Bank Composite House Price Index on Wednesday showed average prices of repeat sales of single-family homes in Canada rose 1.1% in May over April, continuing a trend of May surges of 1% or more in 9 of the past 15 years.

In an attempt to cool the red hot housing market, the Canadian government in July of 2012 tightened mortgage lending rules and qualification requisites.  Though this did dampen home sales throughout the autumn and winter, this week’s Teranet index showed that rising prices are back, posting yearly increases of 2% in April and May over their prior 12-month readings.

The suspicion that last year’s tighter mortgage qualifications have lost their tranquilizing effect was confirmed by Monday’s Canada Mortgage and Housing Corporation’s report showing a higher than expected jump in new housing starts in May from April.

Only on the West Coast of the country did annual housing prices drop in May, mainly in Vancouver (-3.2%) and Victoria (-4.1%).  Yet this comes after years of leading the nation on the way up.

The remaining 9 major metropolitan regions in the country all saw annual rises in May ranging from the lowest at 1.9% in Montreal to the highest at 6.5% in Quebec City – a mere 155 miles apart!  The nation’s largest city of Toronto ranked right in the middle with an annual May gain of 3.9%. (All data Reuters.)

It’s Not A Bubble

In an interview with the Wall Street Journal’s Canada Real Time, OECD secretary-general Angel Gurria was keen on making a distinction.  “An overvalued housing market and a bubble are not the same thing,” he addressed.  “The housing market has been building very steadily over a period based on growth, jobs, good income, and a Canadian economy that’s been in good shape. Frankly, it’s not a bubble in the sense of a great big speculation in the property market. I think there will be a cull in some investment in the sector, which will see prices stabilize over time.”

In that, Gurria makes a valid point that can be applied to any market rising in price – be it in housing, equities or commodities.  As long as a populace can afford the higher prices of homes, stocks, and materials through increasing wages and economic prosperity, then you really do not have a bubbling, exaggerated distortion in prices.  All you have in this case is a steadily increasing valuation that is not in danger of popping since the underlying foundation of affordability is rising in good pace with the prices.

Another reason few in Canada are worried about a collapse in the nation’s housing sector is the state of the country’s banking system.  Where America’s banking and mortgage industries were progressively weakened by risky practices for years leading up to its housing crisis, Canada’s financial sector has remained sound and stable.

“I think that the Canadian economy has managed to navigate a lot better through the crisis, among other things, because its financial system was better regulated and capitalized,” Gurria contrasted.  “Canada also has a very prudent fiscal policy. It had it before the [American] crisis struck, when [Prime Ministers] Chretien and Martin built it over time. I think it’s working well. All together, I’d say that Canada is reaping the rewards of past virtue and also present good practices. It would be good if there were many more countries like that.”

Well, stable banking and mortgage systems built up over decades since the early 1980’s do provide a nice solid support under housing prices… today.  But what about the future?  Is not Canada largely a resource producer?  Is not the global slow down dampening the demand for commodities?  Might Canada’s economy slow the way Australia’s has, which would in turn trigger a drastic downward correction in Canadian housing values?

“One of the big differences between the two countries [Canada vs Australia],” Gurria answers, “is that Canada has a much more diversified economy on the manufacturing side. It’s also next to the biggest economy in the world, which it has a free trade agreement with. Canada also has a very generous endowment of natural resources which have been a big bonanza for the country.”

Thus, while the OECD has put Canada on its watch-list of housing markets most due a correction, its officials do not consider it a bubble in danger of bursting.

Given the diversity of Canada’s economy, it is unlikely that even a major global slow down in commodities will have a recessive impact.  The Canadian dollar has remained stable for several years in a range from slightly under par to slightly over par with the U.S. dollar, providing a nice balance between export value and import power.

Interest rates are also moderately low; not low enough to fuel a hot housing market into a raging inferno, yet not high enough to impede global competitiveness.  Unemployment has fallen from April’s 7.2% to 7.1% in May, with a forecast of 6.7% in 2014.  And economic growth is expected to be a comfortable 1.4% this year and 2.3% the next – just enough to keep pace with the rising housing market.

Housing prices in the western-most Canadian province of British Columbia on the Pacific coast falling for the first time in a long while seems to confirm the government’s ability to keep things from running out of control.

With a reputation for tough regulation and active vigilance, there is every indication that the past 3 decades of stable growth in the Canadian economy and its housing market will continue in a gentle upward slope for decades more.