Can You Really Make a Billion-Percent Gain?

A new cryptocurrency came out last August. But nobody started paying attention until the past month.

That coin is up nearly 800% in the last 30 days. But that’s not really impressive…

That’s almost a 100 million percent gain! Didn’t think it was possible? You were wrong.

The cryptocurrency I’m talking about is called Shiba Inu or Shiba Coin and it goes by the symbol SHIB.

Not even one one-thousandth of a penny. But trading records show that a certain individual who’s been buying since the debut has put a total of about $3,400 in over the past year.

That investor’s holdings are now worth approximately $5.7 BILLION!

Through an investment in a new cryptocurrency, this person turned $3,400 into nearly $6 BILLION.

From tiny retail trader to cryptocurrency multibillionaire in a year sounds like a pretty nice path to take.

And I’m sure you feel the same as me when I say: Dang, I wish I’d bought some, too.

But betting on the thing that made people lots of money last year isn’t the way to make up for missed opportunities. That’s just a surefire way to get caught up in the hype and lose a bunch of loot.

What you really need to do is be the person buying these coins early on, before everyone is talking about the 800% gain in a month or the 100 million-percent gain in a year.

Before I tell you what he’s uncovered, let me give you a little backstory so you understand how prolific my colleague’s crypto predictions have been…

Today, everyone and their grandmother is asking me about cryptocurrency investments. But back in the early 2010s, not many people outside of tight financial circles had even heard of Bitcoin.

I knew about it from my days at Morgan Stanley — we used to trade it in our spare time back when it would bounce from $50 to $450 in a day.

But it wasn’t until I got to Angel Publishing, Wealth Daily’s parent company, that I met someone who was ready to “HODL” for the long run (that’s cryptospeak for “hold,” by the way).

Up to that point, it was all traders trying to make a quick buck on something none of us really understood.

But then I met Christian DeHaemer. And he flipped my view on Bitcoin and the rest of the cryptocurrency world on its end.

Join Wealth Daily today for FREE. We'll keep you on top of all the hottest investment ideas before they hit Wall Street. Become a member today, and get our latest free report: "The Death of Credit Cards."

He’d been researching the coins and the blockchain network they were built on. And he could see a very profitable future for them and investors who got in early.

So back when most people didn’t know a Bitcoin from a Chuck E. Cheese token, Chris recommended his investors get some skin in the game.

At that point, one Bitcoin would set you back just under $450. As of today, that same Bitcoin would net you over $61,000. That one coin grew in value 135 times over since Chris gave it the nod. 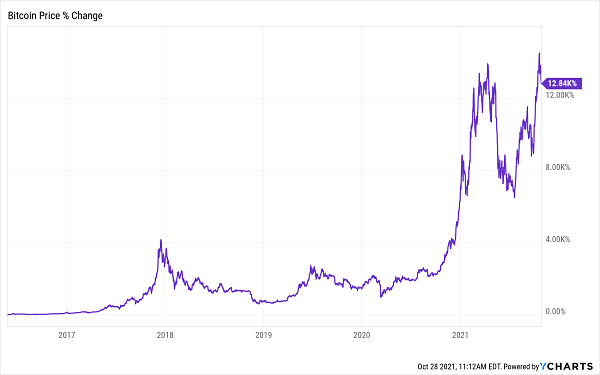 Other analysts were still calling Bitcoin a joke. But investors who listened to Chris and beat the crowd to the Bitcoin trade were laughing all the way to the bank.

That’s not the only time he helped investors beat the crowd to what was about to become the most crowded trade in the world.

Shortly after he tipped his investors off to Bitcoin, he helped them set up a position in the second crypto to hit the market: Ethereum. 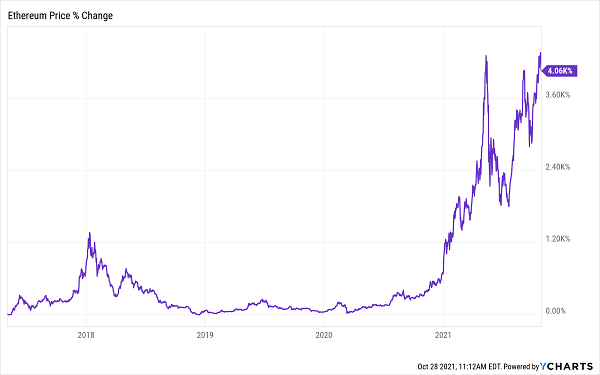 So anyone who bought and held watched their investment grow 40 times over between then and now.

Now, I know what you’re thinking. Those gains are pretty impressive, but they’re not 100 million percent.

And you’re right. But those cryptos I alluded to earlier... the ones Christian recently keyed in on… they’re not Bitcoin or Ethereum.

Bigger and Better Than Bitcoin

Christian is convinced, and his research has me convinced, that these are going to be even bigger than the successes he helped investors find with the OGs of the cryptocurrency world.

In fact, he’s positive that these six new coins, known as “altcoins,” are going to put the Bitcoin and Ethereum gains to shame.

These altcoins are set up to deliver the kinds of gains that turn a relative pauper into a legitimate billionaire practically overnight.

So if you wouldn’t mind being the investor who turned $3,400 into nearly $6 billion, you need to hear what Christian has to say about the next coins to dominate the markets and the headlines.

And you need to act fast. These cryptocurrencies go up at light speed. That Shiba Inu coin moved 800% in the past month. It’s up over 100% this week alone.

Do you really want to risk missing a win like that because you decided to wait a day or two?

I sure wouldn’t. And that’s why I read Christian’s report the second he sent it over to me.

Now I’m sharing it with you so you can get on board the winning team too. So either check out his presentation or read the same report he sent me.

Just make sure you do it today. Because if you wait until Monday, with how fast these coins can rally, you could miss that first few hundred percent of your gain.

So take some time right now, get all the information you need, and make your investments today so you can start planning how you’ll spend your winnings.

And I’ll be back on Monday with some more ways for you to maximize your profits and minimize your risks.