Central Banks Around the World Are Purchasing Gold

This has many gold investors not only scratching their heads, but throwing in the golden towel entirely.

And who can blame them?

Gold trading has been as erratic and unpredictable as Kim Kardashian's love life.

Gold seems to have support at these levels. 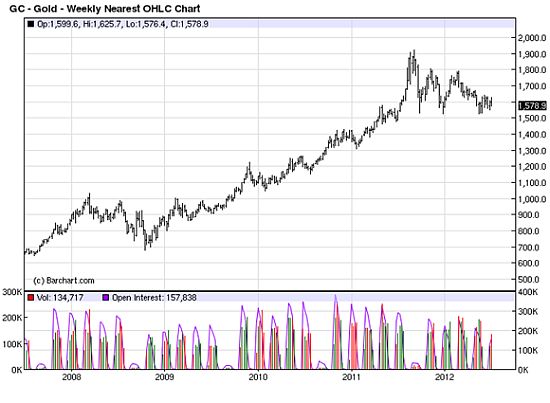 I've talked to some of the savviest gold investors in the world, and they've been buying gold on every dip.

In fact, they're telling me the violent sell-offs we've seen (like last Friday's) are having a positive effect: They're shaking out the weak hands and speculators — and long-term investors are purchasing gold during these panic sell-offs.

This thesis has been confirmed by the data published by the World Gold Council.

According to a recent Barron's article:

Big changes are afoot in the gold market. The short take: The new environment will favor long-term investors who buy and hold for years over speculators who try to trade day-to-day gyrations.

For one thing, central bankers are back buying gold. Think it's no big deal? The last time we saw the so-called official sector as such a consistent and major buyer was in 1965.

Central banks increased their gold hoards by 400 metric tons—each equal to almost 2,205 pounds—in the 12 months through March 31, up from 156 tons during the prior year, according to recent World Gold Council data.

The council "is now confident that central banks will continue to buy gold and has added official-sector purchases as a new element of gold demand."

But that's only one big change.

The second: Short-term speculators have fled the market. Open interest of managed futures funds, considered a good proxy for all speculators, has dropped a staggering 28% since the beginning of September, to approximately 203,224 contracts as of June 5.

This central bank buying piggybacks on the buying they did last year.

In late 2011, central banks became net buyers of gold for the first time since the 1960s.

According to the World Gold Council:

This activity reflected a continued desire among central banks to diversify their sizeable reserves in light of credit downgrades which have brought into question the safety of holding massive amounts of U.S. dollar and euro-denominated reserves.

Last year Mexico's central bank led the world in gold purchases, buying 100 tons. Russia was a close second — and there are rumors of gold payments for oil in Russia.

This shouldn't come as a surprise to Wealth Daily readers. Gold expert Greg McCoach has consistently warned about the moves by countries to abandon the dollar for gold.

And we've have repeatedly called out Uncle Warren for his disdain for gold as an investment and his outright hatred for gold bugs.

I don't assign political motives to an investment like many investors who will only invest in "socially responsible" companies...

Investing is a simple equation of supply and demand. Period. End of discussion.

And when the masses pour into the gold market, it'll send prices much higher.

With central banks buying record amounts of gold, there will be less liquidity for retail investors...

This will have to drive up the price.

In the end, large-scale gold purchases by central banks can't help but build the bullish case for all precious metals — especially gold — over the next decade or two.