What These Stocks Tell Us about Housing

For the past two years, I've been telling you to buy a house.

I received a lot of hate mail for this. People called me a fool. But looking back, you have to admit I was absolutely right.

You can read my article from November of 2010 here. (I apologize for missing the bottom by two months.)

The price of houses has been going up since 2011 — and home prices are about to go up a lot more...

Our own Brian Hicks has been pushing home builders for about a year now.

They just keep going up: 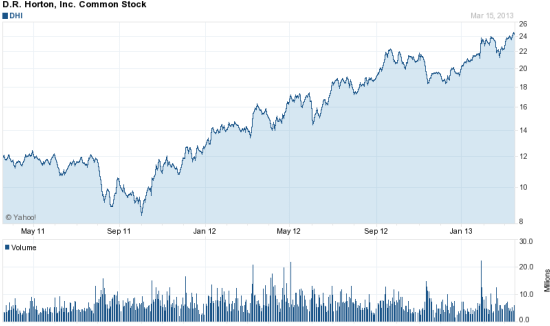 That is insanely cheap. And they say their balance sheet is the best it's ever been.

From a conference call with CEO Donald J. Tomnitz:

D.R. Horton is off to a great start in fiscal 2013. This quarter, we saw a broad improvement in demand in most of our markets, which has given us the ability to raise prices in more of our communities. Both the entry-level and move-up segments of our business are strong.

We're anticipating a good spring selling season and have added homes and communities to capture this increasing demand.

We continue to find opportunities to expand our business in our existing markets, as well as new submarkets. We put a significant amount of capital work this quarter by increasing our investments in homes under construction, finished lots, land and land development. D.R. Horton is in the best position it has ever been in its 35-year history.

Getting Better All the Time

But it's going to get better...

First of all, some seven million families have lost their homes since 2007. Now they are starting to come back. It takes three to seven years to repair credit from foreclosure. Fannie Mae and Freddie Mac require a five-year wait for most people, but if a defaulter can show a one-time event, like a divorce, then the waiting time can be as little as three years.

You can add to this demand some two million new immigrants a year and that portion of the 83-million-strong echo boom generation that wants to buy their first house or move up to their second.

If you add in the numbers of houses that weren't built since 2008 coupled with the natural growth curve in demand, you come to the conclusion that we are some 2.3 million houses short of what is needed.

That's right now, today. In other words, the number of houses being built could easily double.

If you've been waiting for a deal on a house, you better move soon. The most recent data is that existing home inventory is at a 13-year low. According to the National Association of Realtors, the number of existing homes for sale fell to 1.74 million in January, down 57% from the peak in 2007 and the lowest level since December 1999.

On top of that, the mortgage deals are back on the table...

PenFed, for example, is offering a five-year ARM at 2.5% with no closing costs and rewards for select credit cards. The no closing costs would save you $14,000 on a $500,000 loan. Furthermore, the rate can only go up 2% every five years with a lifetime cap at 5%. And they will pay your first month's mortgage.

It's a crazy good deal.

I have no relationship with the company, but if you are interested you can find out more on their website. (Note: You may have to pay $15 to join “Voices for America's Troops” to be qualified.)

The upshot of this is housing is coming back. When houses come back, jobs come back. Lowe's just announced they are hiring 45,000 people in time for spring (none are full-time due to ObamaCare, but that's another article).

When jobs come back, the economy as a whole gets better. Jobless claims are at a five-year low.

For the past four years, the Bernanke at the Fed has been trying to reinflate the housing market. Ben's been buying $85 billion worth of mortgage paper a month to force down interest rates.

Housing prices are now up 7% from last year. If past is prologue, we will have another three years of rising prices...

It's time to buy all those pick-and-shovel plays that feed into the housing market — like timber companies, furniture makers, paint, and roofing.