We had a busy week on Wall Street.

The great Ben Bernanke told us things were bad — and getting worse.

Chinese manufacturing is slowing... Home sales dipped in May... The people of Greece voted for the austerity/pro-euro party... The debt crisis then moved on to Spain, who is now paying more than 5% for 18-month paper (this despite the fact that Spanish banks recently got a $100 billion euro bailout).

But the news isn't all bad.

The Fed chief told us he would continue the “Twist” for the rest of the year.

This is a card trick in which Ben sells short-term debt and uses the proceeds to buy long-term debt in an effort to push down mortgage rates.

Though I do remember my grandfather once telling me they were 2% during the Great Depression — only no one could get a loan then.

We wrote on Thursday that Warren Buffett is buying up housing on value. And because Bernanke did not invoke QE3, the market has sold dollar-denominated assets like gold and oil... which in turn, as Brian Hicks tells, has China buying up all the cheap oil it can gets its hands on.

Your humble editor detailed (in full below) how, if we used the money supply/gold price as an indicator, gold would be at $8,500/ounce today.

You should be looking for entry points on this dip.

Here is your dollar/gold chart: 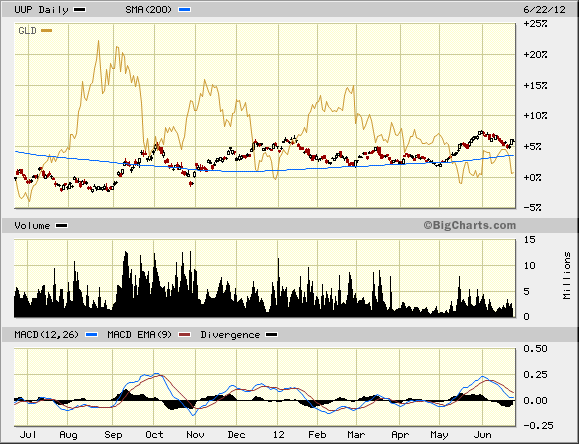 When the greenback goes up, gold (and oil) go down.

Will the dollar continue to rise as the euro falls... or will we get QE3 in August, which will drive the dollar down?

It's too soon to tell — but I'm betting on the latter.

I've been doing some interesting research on the idea of the U.S. dollar as the world's reserve currency.

The reason the Fed gets to pay 0.25% on its debt while Spain pays more than 5% is because the dollar is used to trade between countries — and to buy oil.

The Chinese have been working hard to end this special relationship. I'll tell you more about it next week.

In the meantime, go outside and ride your bike or something...

OPEC's Own Oil Crisis: Shady OPEC Dealings
Editor Keith Kohl looks into the shady OPEC dealings of the past, showing investors why oil prices will rebound to $100 per barrel.

Gold Going to $8,500/oz: Buy the Next Dip in Gold
As I write this, gold futures have fallen below $1,600. We wait with bated breath as the great Fed Chairman Ben Bernanke gathers his papers and readies his announcement...

Investing in Energy Independence: Taking a Lesson from Presidential Promises
Editor Keith Kohl shows investors how to read between the lines and profit from Obama's energy plan.

How to Avoid the Global Debt Debacle: World Tells Europe to Print More Money
Analyst Briton Ryle explains why Greece's decision to stay in the EU is a good thing, but why all is not well that ends well when it comes to debt and bankruptcy across the pond.

Ex-Saudi Aramco Exec: U.S. Becoming Energy Independent
Publisher Brian Hicks shares his takeaways from the Second Annual Mine LLC Oil and Gas Forum, where he spoke last week about Peak Oil, plus the reasons he believes oil prices will remain high... and why this is the greatest investment even of the century.

The Truth about Energy Subsidies: Fossil Fuel Gets More
Energy solutions should be viable without government handouts. Yet the recent figures show oil, coal, and gas got $312 billion... while renewables got $57 billion in one year.

Oil Prices to Double: China Buys Record Oil
As I write this, oil has broken below the $80 a barrel mark. This is the first time it has traded below $80 since last October.