Bitcoin is Now Worth More Than Gold

For the first time ever, a single bitcoin is now worth more than one ounce of gold.

That's of course good news for Bitcoin bulls. But some commentators are also mistakenly associating the rally in Bitcoin with a negative sentiment toward gold. Nevertheless, what's good for Bitcoin is not necessarily bad for gold. 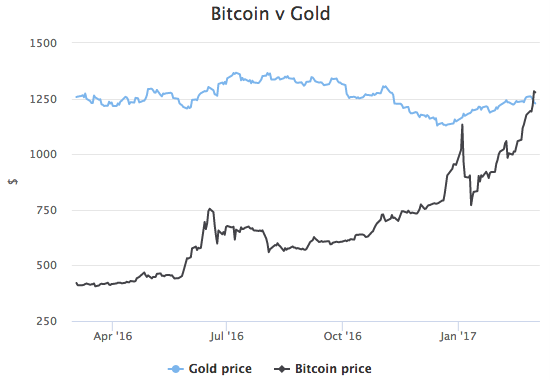 Bitcoin prices have soared over the past several months amid strong demand in China and India — along with speculation that the world's first Bitcoin ETF will soon receive regulatory approval in the U.S.

The recent price parity has sparked lively debate between Bitcoin bulls and gold bulls over which is better. But there's a bit of a flaw in having this debate.

Bitcoin, gold, and central bank currencies are all forms of money... products used to store and exchange labor. These three things are valued independently of each other — the value of one is not directly coupled with another.

Bitcoin, gold, and central bank currencies like the U.S. dollar are best considered as competing consumer products vying for market share of the demand for labor storage and exchange.

The U.S. dollar and other world currencies issued by central banks are essentially government-offered money products. This official backing is supposed to ensure security of value. But in a post–Bretton Woods system, these now fiat currencies can be infinitely created and sharply devalued through dilution.

Bitcoin and other cryptocurrencies are money products offered by private businesses. These products are created to have limited supply. But there is unlimited potential for competing cryptocurrencies to exist.

If Bitcoin and all other currently existing cryptocurrencies become overvalued, someone else will just come along to create a brand new one.

Gold is essentially nature's money, and its supply is strictly limited. The Earth's gold imports fell by 100%, to zero, millions of years ago or more. There's no more gold being created. And what's more, most of the world's mineable gold resources have already been depleted.

The USGS estimates that there are only about another 2 billion ounces of gold reserves currently accessible. That means more than three-quarters of the world's accessible gold has already been mined — and it's already owned by someone else. Is it you? I bet not!

I continue to stay long on gold.