The Brewing Bull Market in Biotech

If you ask any CEO of a major pharmaceutical company about generic drugs they will gladly tell you that cheap knock offs are a four-letter word. That's how much they dislike them.

After all, generics generally cost 70% less than their bigger brand-named peers-competition the big boys would rather not have.

The result is that cash strapped consumers now save over $10 billion every year at pharmacies across the country with the lower priced copies.

That's why as a group generic drugs are expected to wipe out $67 billion in revenues from the major pharmaceutical companies between now and 2012 as even more big named drugs go generic.

That just crushes revenues at companies like Merck, Pfizer and the the rest of the Big Pharma.

But as big as those lost sales are for Big Pharma, those declines are turning out to be nothing but a big boon for biotech investments.

The reason for this is simple. The drug market is changing rapidly and Big Pharma knows it.

So faced with shrinking pipelines and falling revenues, the old way developing drugs through chemistry alone is giving way to the modern technologies of gene sequencing, protein analysis, and nanotechnology. In these areas, biotechs dominate.

And without the cutting edge research and development that the biotechs offer, revenues at the Big Pharma level will likely hit a wall. Again, part of it has to do with generics.

Patent protection in the U.S. grants a company the exclusive right to a drug for 20 years. However, the problem is that it usually takes about 10 years to actually bring a drug to market. That leaves the company only about 10 years to exclusively market a new drug.

Of course, once the patent has expired, anyone can sell a generic version of the drug with FDA approval which is practically a given these days. And without all of the costs that were necessary to bring it to the market in the first place, generic companies can easily sell the identical drugs at much lower prices.

That's one of the big reasons that Big Pharma has been turning to both acquisitions and partnerships with upstart biotechs companies. Because unlike traditional drugs, many of these new biologics are not yet vulnerable to generic competition since the FDA hasn't decided how to regulate them.

So instead of having only ten years of exclusivity to a particular therapeutic, many of these new classes of drugs are currently protected indefinitely. That offers a much better return on investment.

But that is only part of the story.

The other is that faced with the shrinking pipelines and diminishing returns from their own research and development, the truth is that these mergers and partnerships just make good business sense.

In fact, last year was a record year for biotech mergers & acquisitions, according to Ernst & Young, with closed deals worth potentially $60 billion in the United States. European deals meanwhile contributed another $34 billion.

Of course, numerous other drug makers are also looking to fill their pipelines and are paying ever larger sums to biotech companies for access to their cutting-edge developments.

That was the story at least in these recent buyouts as the bigger names worked to gobbled up the smaller in the race to enhance their own their pipelines:


Naturally, that type of activity has caught the eye of the markets, as biotech has suddenly become the hot sector of late as money rotates out of commodities. 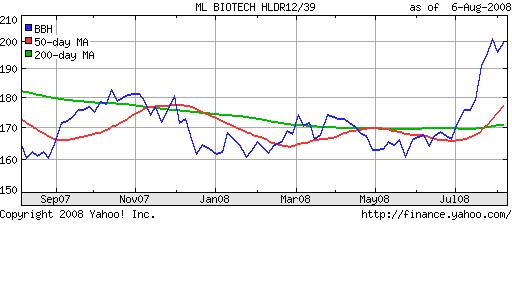 Take a look at the chart of the BBH. It is the popular Biotech HOLDRs ETF and it is on a tear ever since energy began to pullback.

But as has always been the case with biotech/drug stocks, single stock plays are as risky as it gets. The rewards can be huge, but so can the losses making them the truly some of the most speculative plays on the books.Exchange traded funds are the better bet.

Keep that in mind before you invest.

PS. Making money in a bear market is tough, but it can be done. Since the first of the year The Wealth Advisory is 11-5 in its closed positions with a cumulative gain of 290% vs losses of only 55%. That is a net gain of 235%.

To learn more about The Wealth Advisory click here.