After decades of dominating the manufacturing sector, China is losing its luster as average wages climb and the population's age increases.

So in this article, we’re going to explore why more and more companies are choosing to cease operations in China and establish them in Mexico instead.

Mexico has both lower labor and lower production costs than China.

For example, a company producing textiles in China may find that it can save as much as 15%–20% by moving operations to Mexico.

This is due to a number of factors, such as lower wages, cheaper raw materials, and lower overhead costs.

One of the reasons for lower labor costs in Mexico is that the minimum wage is lower than in China. 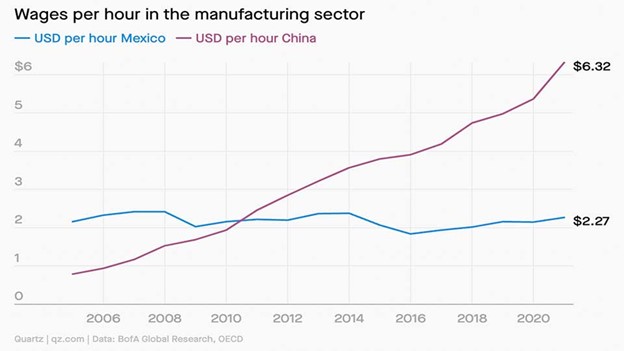 Additionally, the cost of living in Mexico is also lower than in China, which means that companies can offer lower wages and still attract a skilled workforce.

Another factor that contributes to lower labor costs in Mexico is the availability of said large, skilled workforce.

Mexico has a large population of skilled workers, particularly in the manufacturing sector. This means that companies can find the workers they need at a lower cost than they would in China.

Mexico also has lower production costs than China because of its proximity to the United States and Canada, which can reduce transportation costs.

This makes it easier for companies to export goods to these markets, which can be a huge advantage.

This means that manufacturing goods in Mexico can save your company a significant amount of money.

Mexico also has several trade agreements with United States and Canada, as well as many other countries. 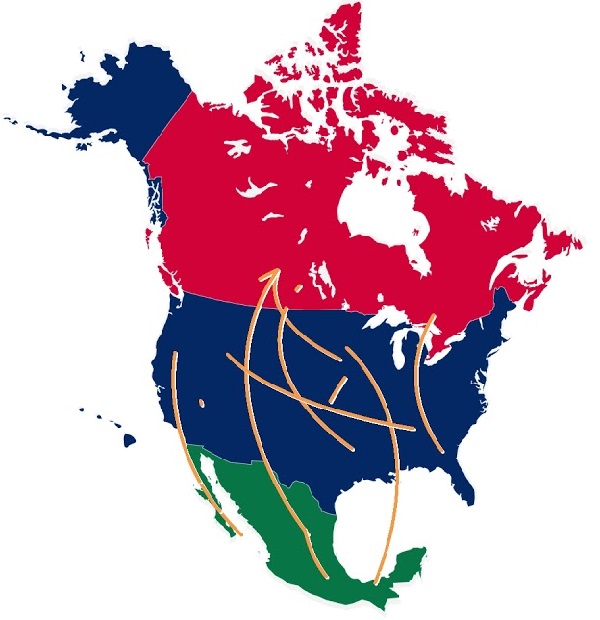 These agreements can significantly reduce barriers to trade and make it much easier for companies to export goods to other markets.

The most notable agreement is the North American Free Trade Agreement (NAFTA), which was signed by the U.S., Canada, and Mexico and took effect in 1994.

NAFTA removes tariffs and other barriers to trade between the three countries, making it much easier for companies based in Mexico to export goods to the United States and Canada.

In addition to NAFTA, Mexico has also signed a number of other FTAs with countries such as Japan, the European Union, and many others, providing companies with access to a wide range of export markets.

No Longer a World Away

Another advantage of establishing operations in Mexico is that it is geographically closer to the U.S. market than China.

And while that may seem like a “DUH” statement, this means that companies can reduce transportation costs for exporting goods to the U.S.

This can be a significant advantage for companies looking to sell goods to the U.S. market, as it can help to keep costs low and increase competitiveness.

Additionally, the shorter distance between Mexico and the U.S. can also reduce lead times for goods to reach their destination, allowing companies to be more responsive to customer demand and improve their overall efficiency.

This can be particularly advantageous for companies that rely on just-in-time delivery, as it allows them to keep inventory costs low and respond quickly to changes in demand.

Finally, the ongoing trade war between the U.S. and China has led to increased tariffs and uncertainty for companies doing business in China.

The trade war started in 2018 when the U.S. imposed tariffs on Chinese imports as a means of pressuring China to change its trade policies.

This led to an escalation of tariffs and countermeasures by both countries, resulting in a significant increase in the cost of doing business in China for many companies.

Many companies are looking for alternative places to manufacture their goods as a result of the trade war.

They are looking for options that can help them avoid the tariffs and uncertainty and provide a more predictable business environment.

Again, Mexico is a great option for these companies, as it is not subject to the tariffs imposed by the U.S. on Chinese imports and it has a more stable business environment than China.

For example, a company that produces electronics in China may find that it can save money and reduce uncertainty by moving operations to Mexico.

This can be particularly beneficial for companies that rely on exporting goods to the U.S. market, as it can help them avoid tariffs and remain competitive.

There are countess reasons why companies are choosing to cease operations in China and establish them in Mexico instead.

From cost savings to political stability, Mexico offers a number of advantages over China as a location for manufacturing and other operations.

It also offers an incredible opportunity for investors looking for future profits.

As China became the factory for the world, its economy grew by leaps and bounds.

That same thing is about to happen to the Mexican economy…

And investors who know where to look are going to reap all the benefits.

My colleague Christian DeHaemer was the first to alert me to this seismic shift.

He also tipped me off to several companies that are destined to capture the lion’s share of the growth and profits.

I’m not saying you have to invest in the companies Christian uncovered to make a profit.

But I am saying that you need to see his research before you invest in ANY companies facilitating this shift.

So take a few minutes out of your day today to learn more about the end of China’s dominance and the start of the Mexico’s growth.

And I’ll be back soon with more ways for you to capitalize on the changes currently shaking the global economy to its core.