It looks like roles have been reversed in America’s banking industry, as the largest banks are having their references checked. And the findings are not very flattering at all.

The Consumer Financial Protection Bureau (CFPB) recently released to the public its database of consumer complaints filed against the big banks.

“The CFPB's expanded database, unveiled Thursday, shows the majority, or nearly 55%, of the more than 90,000 complaints filed with the agency relate to mortgages, the latest indication of the problems banks face in response to a surge in foreclosures. Credit cards ranked as the second-biggest source of complaints, accounting for almost 22% of the total,” revealed the Wall Street Journal.

So join me as we walk around the giant oak desk and sit in the comfy leather chair, while the banks sit opposite us with a wide open door to their left and a giant Australian boot hanging from the ceiling to their right. 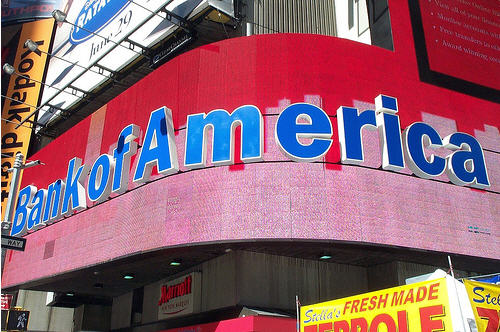 Everyone comfy? Let’s just open this yellow folder in front of us and see what this CFPB report has to say.

“Complaints about Bank of America [NYSE: BAC] outpaced Wells Fargo & Co. and J.P. Morgan Chase & Co... [BofA] accounted for about 23% of the total complaints related to mortgages, credit cards, student loans and other consumer products filed with the agency since December 2011, according to a Wall Street Journal analysis of CFPB data. Wells Fargo accounted for nearly 14%, and J.P. Morgan 11%,” informs the Wall Street Journal.

We glance over the top of the yellow folder, just enough to look at the bankers through that small space between the top of our reading glasses and our eyebrows.

“That’s a total of 48% of all complaints against just 3 banks,” we add up. “Does anyone have anything to say to these charges?”

From the Wall Street Journal:

“A Wells Fargo spokesman said: ‘When we get complaints directly from our customers or through the CFPB, we thoroughly investigate them and if we've made a mistake, we work to do what's right for our customer.’”

“The biggest source of complaint leveled against Bank of America related to mortgages, with the bank accounting for about 31% of all mortgage-related complaints. Bank of America, along with other banks, has been criticized by regulators for failing to verify whether a homeowner belongs in foreclosure and has paid out more than $50 billion in legal settlements related to the mortgage crisis,” the Wall Street Journal continues with the CFPB results.

Again we look up, this time taking off our glasses in amazement. “Failing to verify whether a homeowner belongs in foreclosure? Good God, people. How in blazes do you decide whom to foreclose? Darts?”

“A Bank of America spokesman said virtually all complaints forwarded from CFPB to the bank have been resolved. ‘The servicing of mortgage loans in delinquency or foreclosure predictably results in more frequent customer concerns, as reflected in figures for all institutions in the report,’ the spokesman said. ‘We have been intensely focused on improving the process for our mortgage servicing customers,’” quotes the Wall Street Journal.

What alarms us most is just how many of these complaints admittedly have merit. As a result, explains The Huffington Post, “In February of last year, five large banks, including Bank of America, agreed to a $25 billion settlement with 49 state attorneys general and federal authorities to resolve broad-based and persistent claims that they mishandled home loans in crisis.” “On Thursday, Bank of America and other mortgage companies -- 13 in all, this time -- finalized a separate $9.3 billion settlement with federal bank regulators to resolve similar claims.”

The Charlotte Observer breaks-down the settlements: “[BofA] has awarded some form of relief in 22 percent of such cases filed through the Consumer Financial Protection Bureau, an Observer review found.” For its part, “Wells Fargo granted relief to customers complaining about mortgage issues 9 percent of the time..” While “JPMorgan Chase gave relief 16 percent of the time, and Citigroup did in 18 percent of cases.”

For a moment we consider showing the bankers sitting in front of us some leeway, seeing as they have taken measures to resolve these complaints. Until we turn the page in that big yellow CFPB folder…

“Another 22 percent of Bank of America customers complaining about mortgages disputed the bank’s resolution of their problem.” “Another 24 percent of [Wells Fargo] customers disputed [their] resolution.” “In the majority of the cases, each bank closed complaint files by explaining to the customer what happened and not granting relief,” adds the Charlotte Observer.

“In the majority of the cases? Simply closing the files without relief?” We slam the folder down in disgust, reach for the rope to that big ol’ Australian boot, and give it such a yank for the swiftest booting we have ever unleashed. As the bankers fly out the door, we slap the dust off our hands and slam the door shut behind them.

Picking themselves up off the floor, we hear them complaining of the unfairness shown toward them.

“The banking industry,” relates the Wall Street Journal, “which has long opposed release of the data, criticized the CFPB's move and said it could unfairly damage an institution's reputation. ‘A better service to consumers would have allowed for collaboration between the CFPB and financial institutions to determine if a complaint is indeed valid, prior to publication,’ said Richard Hunt, chief executive of the Consumer Bankers Association.”

Yet the banks should give the American public some credit here – figuratively speaking; although some literal credit wouldn’t hurt either. Yes, big bank people, we understand your concern. We know that a complaint can be launched by anyone over anything. And we know that these complaints are only the beginning of the process, not the conclusion of it.

But slander is not what the CFPB database of complaints is about. It’s about poking bankers with a prodding iron to make sure they sort through this mess which they themselves created. It’s about reminding them just how much disruption, chaos and misery they have brought into the lives of hard-working families across the country. It’s about lifting the rug and rolling it back so that banks can no longer conveniently sweep away their mistakes and hide them from view.

And there is one more thing it’s about… it’s about time.