Are Dividends Really That Great?

If you’ve been reading Wealth Daily for a while, then you’ve probably noticed that I talk about dividends. A lot.

I’m a believer in dividend investing. And it’s paid off very well for both me and subscribers to The Wealth Advisory, an investment newsletter I coauthor.

If a company has extra money and doesn’t share it with the owners, what good is it really?

A good investment should spin off profit. And dividend-paying stocks do just that.

But it’s not just me that’s smitten by income. Some of the best investors and richest folks in the world insist on their investments paying them back.

Many people, me included, use Warren Buffett as an example of an all-star dividend investor. It’s really because one of his investments is the absolute best real-world example of the power of dividends.

Back in the 1980s, Coca-Cola stock was trading around $2 a share and paid an annual dividend worth a whopping 49%.

Today, it trades for $45 a share but only pays a dividend worth about 3%.

If you bought Coke back in the 1980s like Warren Buffett did, you’d be getting almost your entire initial investment back this year in dividend payments.

And you’d have been collecting those payments for over 30 years.

Warren Buffett bought more than $1 billion of Coca-Cola shares in 1988 for an average price around $2.45.

After collecting and reinvesting dividends for the past three decades, he has grown that investment to over $38 billion.

And last year alone, he received over $1 billion in dividend payments. He just got more in dividends than he invested in the first place.

If you add up all the payments over the past 30 years, he’s gotten nearly $12 billion in dividend payments alone!

But he’s not the only investor who’s crazy for dividends.

Have you ever seen the TV show Shark Tank?

The billionaire investors on there make most of their money through venture capital and private equity investments. But when they do invest in stocks, they insist on dividends.

Mark Cuban recently said he’d cut his stock portfolio down. He now only owns two non-dividend-paying stocks. All the rest provide him with regular, dependable income.

And Kevin O’Leary is so smitten by dividends that he started an ETF company called O’Shares that focuses only on dividend-paying investments.

Those are some pretty big names who’ve been pretty successful in accumulating wealth.

But if you need more, there’s a whole lot of it.

Some incredibly smart folks at JPMorgan did a study where they went back to the 1970s and examined the returns of dividend and non-dividend stocks.

You can read through it at your leisure. But I’ll summarize for you here.

Over the long term, dividend-paying stocks posted the strongest returns and had lower volatility than the rest of the market. That means they go up faster and aren’t as likely to crash. 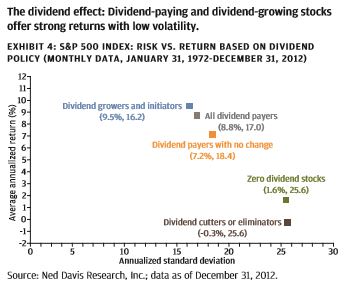 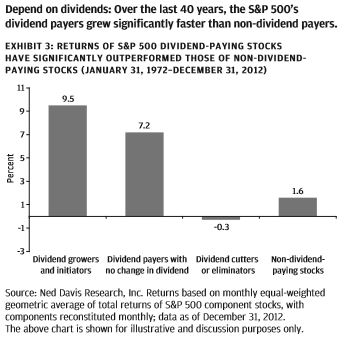 That shows us that dividend payers that grow their payments — like Coca-Cola — give investors better returns than any others.

And finally, companies with attractive yields and low payout ratios outperform the entire market. That’s to say that dividend payers with a nice 3–5% yield that aren’t shelling out too much profit in payments give you a bigger gain than any other kind of stock out there.

The CFA Institute also recently released a study on dividend investing and the difference it can make.

You can check that out when you have time, too.

Why would you want to invest in anything else?

I want to tell you about an investment the subscribers to my advisory service, The Wealth Advisory, recently made. It’s a really amazing stock. But you’d have no idea by looking at its chart over the past five years... 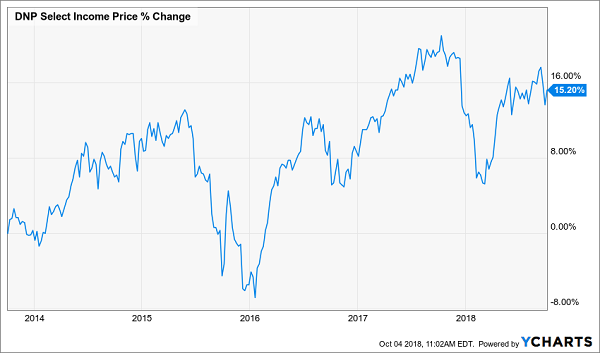 That doesn’t sound like a great investment to me. Tesla’s been up and down, but at least it’s up 64% over that period... 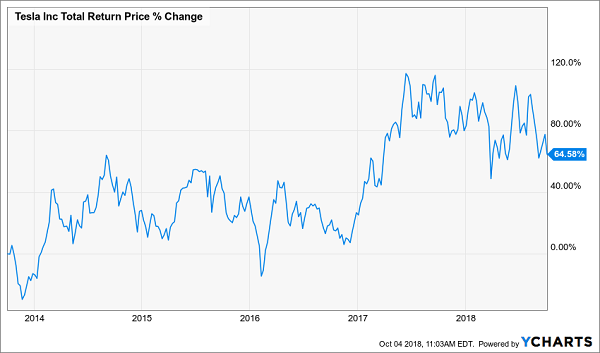 But the thing is, you have to look beyond the price to see the real return from DNP. Because it’s then that you’ll understand why DNP’s 15% was a bigger return than TSLA’s 64%... 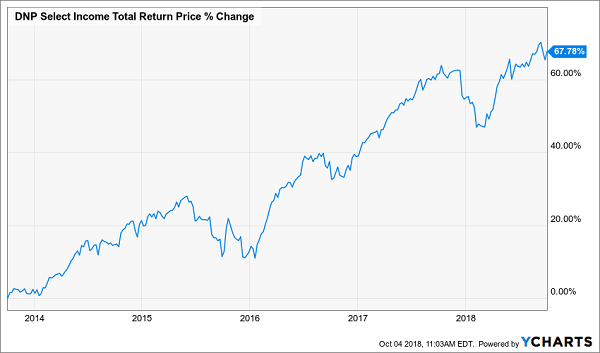 DNP pays a dividend to its shareholders. Tesla doesn’t. And while DNP’s stock price didn’t move all that much, DNP investors made more in the past five years than anyone holding Tesla stock.

And the DNP investors didn’t have to deal with the heartburn Tesla’s fans have... 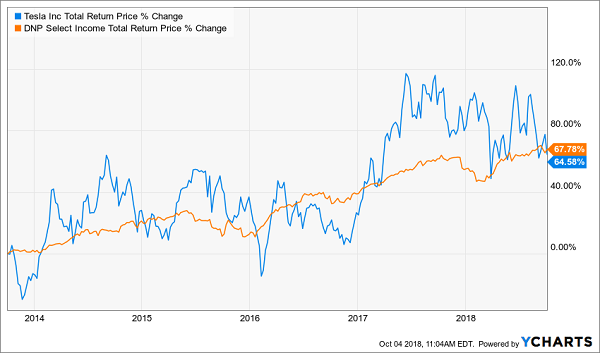 Look at that jagged chart for Tesla and that nice smooth upward line for DNP. I don’t know about you, but I’d rather have my investment tracking the yellow line.

Now, I’m not the kind of guy to get you all excited and then not give you a way to put that energy to work. No, no. I’m far better than that.

So, I’m going to share a couple of my favorite dividend investments with you so you can go out and get started today.

Now, you already know I’m a big fan of DNP. It trades in a really tight rage (between $10 and $12). So you don’t have to worry about timing your buys. They’re all good prices. And its dividend has never failed.

You really can’t go wrong putting some money to work there.

I’m also a big fan of Starbucks. Up until just recently, it was an active recommendation in The Wealth Advisory. And it paid off big for us while we held it. We may even get invested again once things between China and The Donald cool off some.

The company just started paying dividends a few years ago. And it’s managed by top-notch talent.

It’s a ubiquitous brand that has global recognition. My only real concern is that a lot of its expansion plan hinges on China. And it could get a lot tougher for American companies to do business over there.

China aside, Starbucks is an amazing company, and I expect it’ll be paying dividends for decades to come.

Third, I’m going to tell you about an entire family of investments that not many folks know about. They’re called REITs. It stands for real estate investment trust.

They basically own real estate and physical assets and rent them out to other companies. They can be in retail, industry, finance... pretty much any sector.

And because of a special tax law, they have to pay nearly all their profits to shareholders. The magic number is 90% of pre-tax profits shared with investors. But some of them pay out even more.

One of my favorites in this space is Realty Income. It’s a retail REIT, meaning it owns retail properties and rents them back to businesses that need a storefront.

And it pays a monthly dividend that’s been growing every single quarter for the past 84. The company has paid out 578 consecutive monthly payments. And management takes those payments so seriously that they’ve styled Realty Income as “The Monthly Dividend Company.”

The Next Big Payout

I ended my list with REITs because they’re my absolute favorite dividend-paying investment.

They have real assets — land and buildings. They spin off profits — not just because they want to but because they have to. And they’re some of the most stable stocks on the market.

And while Realty Income is one of my favorites, there are two other investments that sit atop it when it comes to real estate.

One of them is a company that provides funding and property for the medical cannabis industry here in the United States. It pays a hefty dividend and has already hiked it twice in the past year.

Analysts are estimating that the U.S. cannabis market could be worth tens of billions within a few years. If they’re right, those payments are only going to keep growing.

You can learn all about that opportunity by clicking here.

The second investment that’s topping Realty Income on my list of favorites is one that capitalizes on the massive growth of online retail.

Amazon recently surpassed $1 trillion in market cap. That makes it the third company in history to achieve such a feat. And it did it entirely through online retail.

But Amazon isn’t the only company out there selling on the web. Pretty much every company that wants to survive has turned to the internet.

And I recently found an investment that lets me get dividend payments funded entirely by all those online sales. I’ve taken to calling it “Prime Profits” since Amazon is the big name in e-retail here.

But it’s so much more than just Amazon. My subscribers and I are profiting from nearly every single online retailer in the world.

You can, too. Just click here to get all the details on that amazing investment.

I hope you take the opportunity to invest alongside the rest of The Wealth Advisory community.

But if you don’t, I hope you at least take my words on dividends to heart and get your investments working for you, too.