I’m going to let you in on a little secret.

When I was in college, I dropped a “good” minor to pursue a minor in History.

This choice horrified my family. When you come from doctor stock, branching away from the sciences is baffling. To date, the only time my family has been enthused by my minor was the time I helped win a round of bar trivia by naming all of King Henry VIII's dead wives.

That was a triumph. But I’m not telling you about my minor to brag about bar trivia.

I’m telling you this because having an understanding of history can also help when it comes to investing.

Why? Well, history can teach us a lot about societies and markets.

And that includes the most important market lesson out there: the factors that cause empires to rise and fall.

Just look at the Persians, the Romans, the Mongols...

These names should summon up images of towering architecture, established society, and massive armies. History will always remember these societies as great milestones of human progress. Yet every single one of these empires has fallen because something went wrong.

Today, a similar thing is happening in the technology industry.

Today’s technology companies exist in the exact same world that ancient empires thrived in: an aggressively competitive environment where success can be impacted by the most minute factors. To survive, the tech giants must stick to their wits and beat out the competition.

And one company is doing just that.

It turns out this company has figured out the technology industry’s equivalent of a Trojan horse, and it will help it excel alongside the smaller companies that provide its technology.

At this point, you're probably very accustomed to the term "Trojan horse"

A Trojan horse is a way of infiltrating something under false pretenses. For example, when malware gets onto your computer through a promising email, that's called a Trojan horse.

Why do we say this?

Well, if you've seen the movie Troy, you probably already know the answer.

When we use the phrase “it’s a Trojan horse,” we’re actually paying homage to one of the most insidious and clever war tactics in human history, which happened to be a giant wooden horse. 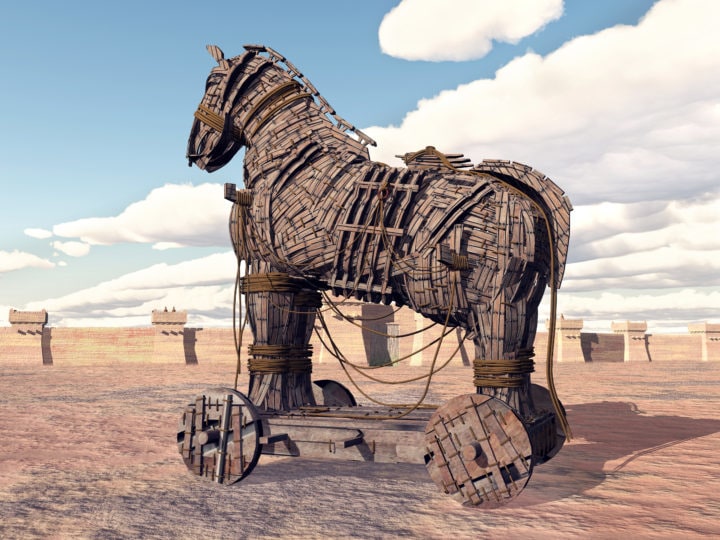 The image above is a digitally rendered version of the eyesore given to the Trojans by the Greeks at the end of a 10-year war, and it was a gift that ended badly for the Trojans.

The Greeks built the horse, and then a handful of soldiers got inside. Then the remaining Greek soldiers appeared to abandon the horse, boarding their ships and sailing away to create the image of retreat.

Sadly, the Trojans bought it.

Delighted by their win, they brought the Trojan horse into their fortress as a victory trophy.

That turned out to be a mistake. As soon as darkness fell, the Greeks hiding in the Trojan horse opened the gate for the rest of the Greek army, which had sailed back quietly in the night.

This story ends with the Greeks slaughtering every Trojan citizen in sight.

From this, you should take two things:

And that brings me to the company I want to talk about today: Apple.

You see, Apple has perfected the art of Trojan horses. Time and time again, the company is able to infiltrate new markets and roll out products all under the guise of something else.

In fact, just recently, it became apparent that Apple was testing the technology needed for its most groundbreaking product yet: its augmented reality headset.

And all that testing was happening through technologies already on the market.

In the tech world, it has long been rumored that Apple is going to be the first company to release an augmented reality headset.

Well, before the headset was even on the company's radar, Apple built its empire on the smartphone market.

But nowadays, the competition for that market is a lot tougher. A wide range of companies offer consumers cutting-edge smartphones and tablets.

And that leaves Apple with only one option to maintain its empire: launch a new product that will keep it on top.

An augmented reality headset is that project, because it could majorly impact the smartphone market by introducing a preferable alternative to a handheld device.

That said, how can investors actually trust that Apple will deliver this headset?

After all, the highly secretive company could be blowing smoke.

Or this could be a rumor and nothing more.

The truth is that Apple has actually been building the foundation of its augmented reality headset over the past year.

It's just been taking the "Trojan horse" approach, introducing this cutting-edge technology through products already on the market.

3D Sensing Technology in iPhones Is the Proof

In 2018, Apple released the first set of iPhones with 3D sensing technology.

3D sensing technology places Apple well ahead of its competition by giving it control of a technology that is expected to be worth billions in just the next few years.

What does 3D sensing do, and why is it important to the augmented reality headset?

3D sensing allows the iPhone to execute accurate facial recognition so you can log into your iPhone just by holding it up to your face.

Outside of this, 3D sensing can recognize biometrics for payments, sense gestures, and make it possible to have an immersive shopping experience.

And all of this is absolutely critical in a successful augmented reality headset.

That is how we know the Apple empire isn't falling anytime soon.

The company is already infiltrating the next big market: augmented reality headsets. It's just not doing it in a way people expect.

That said, Apple isn't the only company that is benefiting from the rise of 3D sensing technology. As I mentioned at the start of this article, Apple still relies on a handful of companies to make its cutting-edge innovations work.

And those are the companies that investors should be looking at because they are the ones that have the potential to become new tech giants, flourishing through the support of an established giant like Apple. And one Apple supplier is poised to do particularly well.

In fact, this $5 stock could produce an impressive windfall for investors.

If you're curious to learn more about this company and Apple's upcoming augmented reality headset, click here.

Best of luck with your investments,