It’s happening again. A boom is unfolding — this time in a small, obscure town in Middle America.

It’s not oil. It’s not natural gas... It’s all about rare earth.

And it’s only a matter of time before the “majors” swoop in for a piece of a $50 million company with a tight grip on a $30 billion treasure.

Elk Creek, Nebraska, is home to only 112 residents. You've probably never heard of it.

But soon, this town will be a household name.

Because it’s sitting on what may be the largest untapped rare earth deposit on the planet. According to the U.S. Geological Survey:

The Elk Creek carbonatite, located south of Lincoln, has the potential to be one of the largest global resources of niobium and rare earth elements (REE)...[it] is buried beneath about 500 feet of overlying rock and is known only from drill cores, which, until recently, have remained proprietary.

For an area where one in seven are living below the poverty line, this is big. Not only could it bring in millions to the region, it could easily create hundreds of new jobs.

What's even more exciting about this area is that Elk Creek may also be home to the world’s largest resources of niobium. Initial results are already suggesting deposits of niobium in particular are bigger than expected.

Owning atomic number 41, this rare earth element is found in many medical devices (such as pacemakers) and used as a superalloy to build jet engine components, gas turbines, rocket subassemblies, and heat resisting and combustion equipment. We couldn't build most military and defense applications without it.

The United States currently imports 100% of this resource, for which there are no real substitutes. But should Elk Creek hold as much niobium as geologists think, the area could explode.

High-grade niobium is extremely lucrative. The two mines in Brazil and one in Canada rake in more than a billion dollars collectively every year. Imagine if a tiny 40-cent company was bringing in that kind of money…

I've been telling you for months that China still has a stronghold on rare earths. And threats to further reduce export quotas have companies like General Electric shaking in their boots.

While rare earth prices have shot to historic highs, the real possibility of a pullback isn’t likely. And that’s due to limited supply and China’s unshakable dominance.

We must secure new supply, or risk a very real threat to our way of life as we know it.

We already have Molycorp (NYSE: MCP) working to start up its Mountain Pass mine in California. 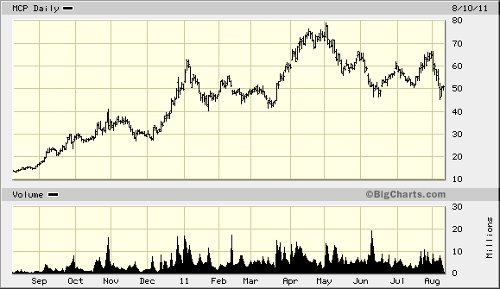 And now we have a mining company operating in the Midwest that hopes to complete pre-feasibility studies by early 2012.

P.S. One of the SPDR Gold Trust (NYSE: GLD) positions we recommended just last week has already returned more than 106% in a matter of days. And there's a good chance it heads higher... 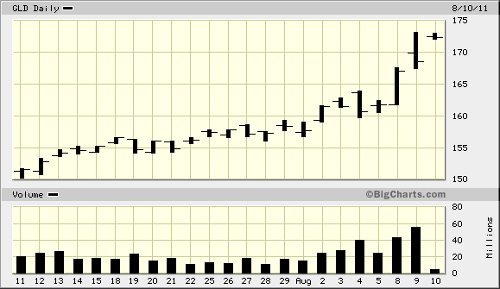 You see, just days after we made the case for $1,950 gold, Goldman Sachs upgraded its gold price forecast to a range of $1,645 to $1,730. Not to be outdone, JP Morgan upped its forecast to a high of $2,500. And it's probably only a matter of time before even more banks jump on the bandwagon... $3,000, anyone? None of this should come as a great shock. Our own Greg McCoach was predicting record gold prices years ago.