Yesterday, the Illinois Senate approved a recreational marijuana sales and taxation measure by a vote of 38–17.

The amended measure must now go to the state House for consideration before the end of Friday.

If the measure is passed into law, Illinois would become the 12th state in the U.S. to fully legalize the long prohibited plant and would set a precedent as the first to approve a commercial recreational marijuana program through its legislature rather than via a ballot measure.

In short, the tides are turning, and rapidly.

Still, the specter of cannabis prohibition continues to hover over a nation whose complicated relationship with the plant has painted all aspects of society, from criminal justice to culture to business.

More and more, that specter comes in the form of legal oddities and inconsistencies stemming from the rising pro-weed zeitgeist.

The same day the Illinois measure was approved for a House vote, news outlets from Southern California reported that illegal marijuana sales are once again on the rise, despite one of the longest histories of decriminalization among the 50 states.

The LA Times reported that of the 365 dispensaries advertised on Weedmaps — a popular online community dedicated to cannabis news and discussions — more than 220 were operating at addresses not on the city’s list of legal retailers.

Owners of legally compliant stores claim that illegal shops maintain a competitive advantage by skirting the state’s 15% cannabis sales tax as well as an additional 10% tacked on by the city.

And since possession for individuals is fully legal for recreational use, tracking of product by authorities is both illegal and practically unfeasible.

On a national scale, 87% of sales by dollar value remain black market transactions, keeping billions in potential tax revenue out of reach.

And the greatest logical inconsistency of them all, the nerve center of the federal government, Washington, D.C. — where individuals over the age of 21 may possess up to two ounces of marijuana, grow their own plants, and transfer up to one ounce of processed flower to another individual — still treats cannabis as a Schedule 1 drug.

A Long Road Ahead

The point behind all this is that with so much left to decide legislatively before the matter attains any level of national consensus, we are nowhere near legal market saturation, either from the commercial side of things or from the investment side.

Not counting the highly likely Illinois approval that should come down by tomorrow, there are still 39 states where cannabis is not fully legal.

Current projections anticipate a near doubling of the market, both medicinal and recreational, by the middle of the next decade. 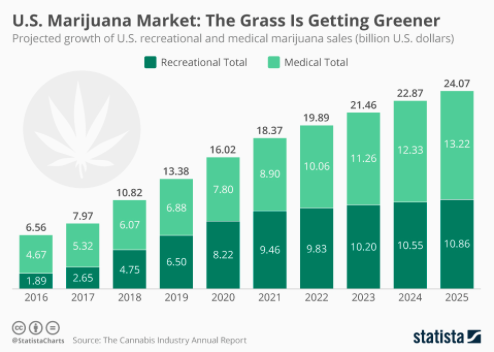 But as fertile as the field still is, it also remains strewn with landmines and potential investing disasters.

Tilray, Inc. (NASDAQ: TLRY), one of the biggest cannabis stocks in history, paints a single-line picture of what mania and unfulfilled expectations look like.

So, knowing what's coming and how long the trend will last, how does one avoid the has-been and never-were landmines?

The key is the business model.

Competing head to head with other cannabis producers is a crapshoot, so the intelligent investor will sidestep the uncertainties by finding companies that provide essential services and infrastructure and successfully market their services to entire lists of producers.

An ideal example is a company I've been following for some months now.

The McDonald’s of Weed

It's a cannabis infrastructure firm that owns real estate and facilities in multiple states, both in the U.S. and Canada, and leases those facilities to brand-name growers.

As of today, the client list consists of 16 prominent brand names.

It's a win-win and allows the company to diminish risk while taking full advantage of the overarching trend.

But it does more than just own and manage real estate.

This company also develops its own novel smokeless products, such as edibles, oils, and even a soft drink.

It's this sort of "alternative" cannabis merchandise that will be the bread and butter of the industry in the 2020s and 2030s, and the real winners will be those who build an early foothold.

As far as the risk of buying into an already overbought stock, this company suffers no such weakness.

After a recent correction, the company trades for less than $0.50, with a total market capitalization of under $40 million.

This is despite owning more than 3,000 acres of prime farmland, as well as close to 200,000 square feet of operating or planned indoor cultivation space, on five properties.

Just one of these properties, located in Nevada, is projected to generate half a million pounds of product, worth close $30 million on an annual basis within the next few years.

But as demand rises, so will the need for infrastructure to support the growth.

Which means more land will be bought and developed, more clients will be added to the roster, and more products will be developed to address a widening spectrum of needs.

After today's giants have fallen, it's today's newcomers, the cannabis 2.0 firms, that will come to define the industry as the legal winds push it into the mainstream.

And I believe this one will be among the major players.