For Jeff Bezos, Amazon’s CEO and largest shareholder, it meant seeing his fortunes rise by $22.8 billion. But he owns 16% of the common stock.

For Amazon’s second-largest shareholder, AWS CEO Andrew Jassy, the story was a little different. He ended the year only about $26 million richer. That’s because he only owns 91,231 shares.

But a small group of in-the-know investors split a $1.5 billion profit from the online retail giant. And not a penny of it came from owning Amazon’s stock.

It Takes a Village

Amazon has grown exponentially since Bezos first set it up in 1994. It recently became one of the only companies in history to reach a stock market valuation of $1 trillion.

To put that in perspective, $1 trillion is more than half the GDP of countries like Canada, Russia, and South Korea. It’s just a hair less than Mexico’s GDP. It’s one-fifth of Japan’s GDP, and that’s the third largest in the world.

It’s a lot of money. 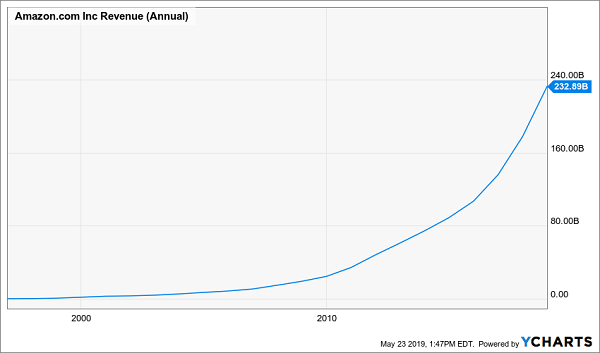 And it takes a massive amount of work and money to keep a gigantic machine like that running smoothly.

Amazon’s got to pay a lot of people and a lot of companies a lot of money to make sure you get your Prime delivery when it was promised.

And it’s got to spend billions more to keep its online infrastructure and platforms glitch-free so it’s easy for us to click that “buy now” button.

I’m talking about over $18 billion each year — and rising fast — just to keep all the packages moving and the websites running.

And a few years ago, some savvy investors found a loophole that allowed them to collect almost 10% of those payments...

Think about that for a second. They split nearly $5 billion over the course of only four years.

Now, it’s a group, so nobody gets $5 billion to himself. But the individual payouts are pretty staggering nonetheless.

There are college professors netting over $70,000 extra to supplement their salaries each year; warehouse workers are pulling in over $100,000 in added income.

I even heard of one construction worker who cashed checks for over $250,000 in 2017 alone. And that’s all on top of whatever they get paid at work.

A few years ago, my business partner and I came across this unique investment opportunity. We spent months researching to make sure everything was on the up-and-up.

Sometimes “investments” that good aren’t 100% legal. Some wheels or palms are getting greased, and it’s not going to end well.

But try as we might, we couldn’t debunk the process. So we gave it a shot... and the checks started rolling in.

Not only did they start rolling in, but they started growing, too.

And after growing at such a fast rate, the payments are getting so big that we’re really not sure what to do with all this extra income flooding in.

But my partner and I are the directors of an investment community.

It’s made up of folks from all walks of life and extremely diverse backgrounds. They all have one thing in common, however: a desire to take control of their lives and gain financial independence.

Now, we’ve already let them in on the details of this payment collection process.

But there’s more than enough money to go around. And we all decided we wanted to share the opportunity with other like-minded investors.

So we put together a presentation and asked if we could share it here with the readers of Wealth Daily.

It includes all the details of what we feel is an incredibly compelling opportunity.

You’ll even have the opportunity to learn about a few ways you can compound the already lucrative payouts and make them even bigger.

All you’ve got to do is click here, sit back, and relax as we show you how easy it is to collect $48,000 a year or more from Amazon.com.

Then — in less time than it takes to boil an egg (that’s less than 10 minutes for my fellow millennials reading this) — you can get on the list and start collecting your payments next month.

What a Difference a Day Makes

Didn’t I mention that earlier? The next payment is going to be calculated on June 13.

Everyone who’s on the list by June 12 gets a payout. Everyone who puts it off until the next day gets bupkis.

Yep. If you’re just one day late, it’s the difference between getting, let’s say, a $27,000 check next month and getting absolutely nothing.

Like my dear old Dad always says, “If you’re not early, you’re late.”

So I know it seems like I’m urging you to act a little early — June 12 is still a couple weeks away.

But trust me when I tell you that you’d rather be obnoxiously early than fashionably late to this party.

Don’t let another opportunity to secure your financial independence pass you by.

Click here and get yourself ready to cash in on the next round of payments coming our way.

They say hesitation leads to frustration. And in this case, you’re likely to find some regret mixed into the end result as well.

So don’t wait to find out how you can get in on the payments.

Get involved today so you can relax and wait for your payout to post in a week or two.

Buffett Bought WHAT?!?
Every three months, institutional investors have to open up the vaults and show anyone who's interested what they're invested in. Wealth Daily editor Briton Ryle reveals the surprising stock Warren Buffett invested in...
Hackers Drain Potential Millions from Amazon Accounts
Last year, hackers stole untold millions from Amazon. But there’s a completely legal way to skim even more money from the retail giant. Wealth Daily editor Jason Williams explains how you can start collecting your share.
Why Amazon Is Worth a Trillion Dollars
Almost exactly two years ago, Wealth Daily editor Briton Ryle wrote that Amazon was cheap when it was $900 a share. And today, he's saying it's probably still cheap at $1,900 a share.
Buffett's Envy: 50% Annual Returns, Guaranteed
Warren Buffett once told investors at an annual shareholder meeting, "...it's a huge structural advantage not to have a lot of money. I think I could make you 50% a year on $1 million. No, I know I could. I guarantee that."