Always Bet on the Best

You haven’t heard me write about cryptocurrencies very often here, but they’re something I’ve been paying close attention to for a long time.

Back when I was working at Morgan Stanley, just after the global financial crisis, some of the guys on my team started trading Bitcoin when it would go from $5 to $50 and back down to $2 in a day.

Since those days, I’ve been fascinated by the currencies and the potential applications that had investors driving the prices sky-high.

But the last time I wrote about cryptos, it was to warn you not to buy Bitcoin. It had been rallying all year and people were getting FOMO and jumping in at what looked like a top.

It rallied a little higher, but then the wind came out and the buyers turned into sellers. And Bitcoin dropped from around $60,000 to around $28,000.

It’s been on the mend for a bit, but it looks like the wind might have shifted again and it could be destined for more short-term turmoil.

But that’s not what I’m here to talk about today. Not Bitcoin, at least. But another cryptocurrency that I’m convinced has far more applications in the future.

I’m talking about Ethereum. It’s Bitcoin’s younger sister and it’s had a much better performance this year compared with the crypto OG. 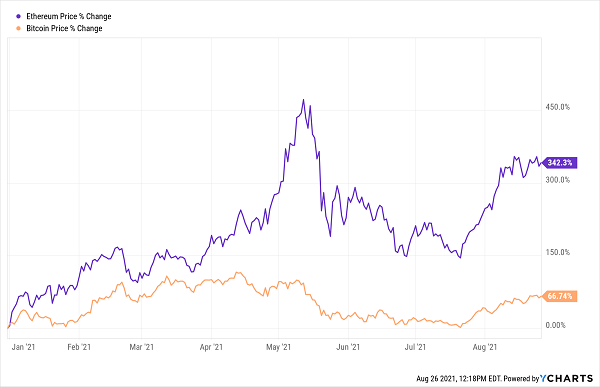 You see, Bitcoin and Ethereum share a common thread, and that’s the blockchain they’re built on.

Blockchain is exactly what it sounds like. It’s a “chain” of “blocks” strung together. Each block contains a set of data. And when that block is filled, a new one is added to the end of the chain.

It might not sound that incredible, but it really is. And that’s because every single iota of data ever created and put into the blockchain will be there forever with a time stamp on it.

But that’s not all. The other blockchain detail that really adds trillions of dollars of value to the technology is that identical copies exist all around the world.

And those identical copies are all updated simultaneously whenever information is added to the blockchain.

It makes the technology unhackable. And while that’s pretty awesome for a currency like Bitcoin, the applications with Ethereum are practically limitless.

That’s because Ethereum isn’t just a token or a cryptocurrency. It’s the network itself as well. And the Ethereum network was really designed for one thing...

To streamline and secure data transmission.

And I’ve actually found a company working on the network that I’m convinced will become a major player and potentially unseat credit card companies like Visa as the top financial institution.

I’m still doing the due diligence on that one, though. It’s a very early-stage industry and I want to make sure I’m not missing any potential warning flags.

But as soon as I’m finished my research, it’ll be released here to you first.

In the meantime, one of my esteemed colleagues has an opportunity I’m positive could have just as much profit potential (maybe even more, but don’t tell him I said that).

I’ve worked with Wealth Daily and its sister site, Energy and Capital, for a while now, close to a decade.

And while I’ve been here, I’ve been privileged to work with some of the smartest people in the business.

One of those people, one of the ones I still come to for advice even after my career on Wall Street, is Christian DeHaemer.

Christian is one of the best macro analysts I’ve ever known. By that, I mean he’s really good at seeing the big picture.

You know that expression about missing the forest for the trees? It’s about being so focused on minute details that you miss the big picture all around you.

And while Christian is big into detail in his research, he doesn’t let the little details obscure the big picture.

When nobody wanted to buy oil last year (and some were even paying to get rid of it), Christian told me to buy shipping companies. He could see the big picture.

Most people don’t want to pay you to take something they could potentially sell later. So he figured a lot of oil was going to get stored on tanker ships.

And lo and behold, I took Christian’s advice and took home a double-digit gain in a few weeks while the markets were still tanking.

But that’s not the only time Christian’s foresight has helped me (or our other editors, or his subscribers for that matter). And he’s thoroughly earned the nickname a last name like his will get you…

By helping us hammer home all those profits.

And now Christian’s found another way to profit from these digital currencies that promises to deliver investors up to three times the gains Ethereum will make.

That means for every 10% Ethereum goes up as its network becomes more and more vital to everyday life, Christian’s investments should move up 30%.

And it also means that if Ethereum moves up another 342% this year, Christian’s investments will explode by over 1,000%!

You see, Christian was actually one of the very first independent analysts to recommend cryptocurrencies many years ago.

He initially recommended Bitcoin and Ethereum, the two biggest cryptos, in 2016 and 2017, respectively.

Think about those gains for a second… $1,000 invested in Christian’s Bitcoin investment would have turned into $139,500.

$25,000 invested into either would have made you a millionaire (several times over in the case of Bitcoin).

And this time, Christian's convinced the gains could be even bigger…

Because just over the past year, we’ve seen gains far larger than what those early investors experienced through Bitcoin and Ethereum over a six-year period!

And Christian’s zeroed in on what he’s convinced (and what he’s got me convinced) will be the next breakout cryptocurrency.

Your Chance to Shine

Because we were all so excited about the potential when Christian shared his research with us, we insisted he had to put it into a report so we could get it out to our readers.

And being a stand-up fellow and a true American hero, “the Hammer” acquiesced and put everything he knows about crypto and the potential gains about to come into a detailed presentation.

In it, you’ll learn about Christian and his investors’ prior successes in the crypto markets. You’ll also learn more about the technology powering the coins.

And, most importantly, you’ll learn how you could set yourself up to capture some of those quintuple-digit gains.

But time is of the essence here. When you’re talking about investments that can move nearly 40,000% in just a few months, you can’t sit around hemming and hawing.

You’ve got to act, and you’ve got to do it fast. Otherwise, you’ll have to sit there and read as we write about the massive gains Christian is helping us hammer home yet again.

So take a little time today to at least learn about the opportunity. You’ve got nothing to lose and a potential fortune to gain.

Just, please, get the information now so you can make your investment before the next leg up takes hundreds of thousands in potential profits away.

I hope you’ll take advantage of this incredible opportunity.