It is only the early risers who succeed in filling
their baskets with white ants.

Two weeks ago, I wrote about U.S. special forces invading Africa in an undeclared war against the Lord's Resistance Army.

The point of my article was that the world is running out of oil, and that formally forgotten or politically-unfeasible locations were now in play...

These areas include South Sudan, Uganda, Kenya and Somalia.

I went on to say the world wasn't paying much attention to this — and that you could make a lot of money off it.

Today Joseph Kony is among the top ten Twitter trends and number three on Google searches, knocking off the usual fusillade of silicone celebrities.

For those of you who don't Tweet, Kony is a tin-pot rebel leader with a long history of atrocities.

He is head of a dwindling movement called the Lord's Resistance Army which is trying to install a government in Uganda based on the Ten Commandments.

He is wanted for war crimes by the International Criminal Court. His forces have been known to massacre whole villages, cut noses, ears, and hands off people, and force children into sex slavery and war.

Kony is about as evil as they come and should be disemboweled, dipped in honey, and tied to an ant hill... or at the very least, tried and hung.

And as I said, about 100 members of Delta Force are hunting him in the Ugandan jungle. I imagine they are getting close.

Maybe I'm overthinking things, but yesterday our fine president said: “Oil is the fuel of the past.”

He went on, “We need to invest in the technology that will help us use less oil in our cars and our trucks, and our buildings, and our factories. That’s the only solution to the challenge. Because as we start using less, that lowers the demand, prices come down. Pretty straightforward.”

This guy is either lying... or stupid.

Gas prices are the highest they have ever been at this time of year.

According to Obama's own government agency, the EIA, gasoline prices averaged $3.84 for March 5, 2012.

But according to MasterCard's SpendingPulse report — which has direct data on gasoline purchases — demand has been falling for years!

“Drivers bought 8.37 million barrels a day of gasoline in the seven days ended March 2. Purchases totaled 58.6 million barrels, the 10th week in a row that demand fell below 60 million. That’s a record," John Gamel, a gasoline analyst and director of economic analysis for SpendingPulse, said...

Gasoline use was down 6.5 percent from a year earlier, the 26th consecutive week demand was lower than year-earlier levels.

Demand over the previous four weeks was 6.3 percent below the same period in 2011. That’s the 50th consecutive decline in that measure and the biggest drop since February 2010.

So what our Commander in Chief says is not only wrong, but not “straightforward” at all.

Reality is the exact opposite of what our highest hypocrite says it is.

This is no surprise really — and I'm not here to bash Obama.

He is a politician; I price in the fact that he will lie to my face.

I don't expect Obama to talk about Bernanke's printing press and the real reason the price of oil is skyrocketing in dollar terms. But today, my friend, I'm delving into conspiracies and the government spin machine that generates them.

Last week, no one cared about Africa or Joseph Kony.

Then Obama starts talking about the price of gasoline...

Three days ago, the U.S. Customs Enforcement said that it can seize any domain name: .com, .org, .net...

And today, Joseph Kony is beating out the usual parade of vapid sluts on Twitter and Google.

People are suddenly outraged by this guy who has been around for 20 years. My guess is that “Free Uganda” will replace “Free Tibet” on bra-less co-eds' Earth Day T-shirts.

The Quest for Oil

According to The Economist, Uganda expects to earn $2 billion a year from oil by 2015.

But there is more oil in South Sudan, Kenya, Ethiopia, and Somalia... lots of shallow basin oil that has never been touched.

I've written before about the East African Rift oil basin. You know about the secret drone strikes against Al-Qaeda in Somalia and the increase in troop strength in the U.S.'s Africa Command AFRICOM located in Djibouti.

Now you know about the concerted propaganda push against one of the last remnants of the Cold War: a jungle fighter with 300 or 1,000 followers who happens to be in the way of energy extraction.

Don't get me wrong; I'm all for it. More oil, less death and destruction, and massive opportiunties for Crisis & Opportunity readers.

I've found one 11-cent company that is drilling in the Puntland region of Somalia. Well, it's a 20-cent company now... 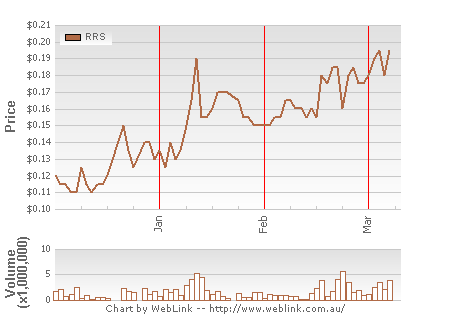 They reported yesterday: “The well is currently drilling a 400 meter section composed of inter-bedded sandstones and shales believed to be Upper Cretaceous in age. Most of the sandstone intervals in this section have exhibited oil and gas shows confirming the existence of a working petroleum system.”

According to the BBC:

Farah Hassan Atosh, a traditional elder and resident of Armo town, 28 kilometers northwest of the oil field, said: “We are expecting great things. It will change our lives for the better. Insh’Allah [God willing] we will never depend on others to give us food again. You can see many more people arriving every day and it can only add to the development of the town.”

Drilling began in January 2012, and locals support the project, he said.

“We not only support it, we will defend it from anyone who wants to stop it. They are employing many young men who would have been idle and easy prey for recruitment into militias.”

Obama wants to get reelected. Taking out bad guys, pacifying East Africa (including his ancestral homeland of Kenya), and increasing the supply of oil won't hurt.

I'm guessing Kony is either dead or will be dead soon.

Look forward to Obama claiming another victory against terrorism and new oil discoveries in Uganda over the next month or so.

To get complete articles and information, join our newsletter for FREE!
Plus receive our new free report, Predicting the VIX Moves

America's Oil and Gas Boom
It's a perfect storm for the American oil industry... one that spells super profits in North American oil and gas stocks.
Silver Heading to $80 an Ounce
Gold and silver prices showed big volatility in both directions the past week, indicating we may be ready to run to the next new highs...
Uranium Sector on its Way Up
Apples fall, VIX gaps up, how to make money like a contrarian, and the most-hated investment sector is on the way up...
Buffett's Envy: 50% Annual Returns, Guaranteed
Warren Buffett once told investors at an annual shareholder meeting, "...it's a huge structural advantage not to have a lot of money. I think I could make you 50% a year on $1 million. No, I know I could. I guarantee that."