A Happy Holiday for Cannabis Investors

With the unofficial hippie holiday of April 20 (4/20) coming this weekend, I’ve noticed a lot more folks asking me about cannabis investments.

They want to know what the next 10-bagger is going to be. Everyone wants a tip on some penny pot stock that’s guaranteed to make them millionaires.

And I’ve got my eye on a few smaller cannabis companies that could turn out to be home runs. But there’s rarely any guarantee in investing. And there’s pretty much never one when you’re talking about microcap stocks.

But I’ve also had a lot of folks ask me about the big names in the industry: Canopy, Aurora, Aphria. Is the growth over? Have those ships sailed?

How about the ETFs? There’s the Alternative Harvest ETF (NYSE: MJ). That pays a dividend and has over $1 billion invested in it.

And a new one just started trading yesterday. It’s called the Pure Cannabis ETF and its ticker is YOLO.

And I tell them all the same thing. There are good points and bad points to all the companies and investments they’re asking about.

And there are reasons to think any of them could turn out really great.

But if I had to pick, there’s only one cannabis investment I’d bet my own retirement on. I’ll tell you about that in a bit. But first, let’s talk about some of the investments I’ve been getting asked about...

The most popular question I get — and the most actively tweeted on my Twitter feed — is what tiny cannabis company is going to explode for 1,000% gains this month.

I’ll be completely honest: I wish I knew. Because I’d sell everything I own, take out a second mortgage on my house, and invest it all.

But unfortunately, I don’t know which one’s guaranteed to score you a 20x return. I’ve got a few ideas. But I’m not sure.

I think Liberty Health Sciences’ (OTC: LHSIF) licenses and dispensaries in Florida will be really profitable when that state legalizes recreational cannabis. It costs less than $1 right now but could trade for $5–$10 on positive legislation.

But it got hit hard last year by short sellers. And it hasn’t fully recovered yet.

But U.S. banks are going to be able to get in on the investing end of the deal soon. And SOL’s experience incubating the companies will be worth something. But its money won’t be able to compete with Morgan Stanley and Goldman Sachs.

So, yes, there are a few decent smaller companies that trade pretty cheaply. And I wouldn’t tell you to stay entirely away from them.

But I’d advise you spread your investments out and not put any more than you’re willing to lose into those kinds of stocks.

They can go down just as fast as they go up — sometimes even faster.

Just because a company’s price is higher or its market cap is bigger doesn’t mean it’s a safer investment.

It’s a little less susceptible to big investors swinging the price. But it’s still at risk of a solid drop.

And that’s because the big companies in this industry — the Canopys and Auroras and Aphrias — all trade at supreme valuations. They are the best in the industry and you’ll pay a luxury price for them.

Over the past four quarters, Canopy sold about $154.4 million worth of cannabis. It has a market cap of $15.31 billion. That’s a price-to-sales ratio of almost 100.

I’m not saying these stocks aren’t going to keep going up. They probably are. But that’s a very high valuation. And it has to come back down to Earth.

That’s either going to take the form of a massive correction or an extended plateau. Sales have to catch up to price at some point.

I’d hate to buy and then watch my cash just sit there and do nothing almost as much as I’d hate to ride the correction.

So, again, I say, don’t bet the farm. But don’t be afraid to bet a little on the bigger guys, too.

That brings us to the exchange-traded funds, ETFs. And here, too, I see some good points and some bad ones.

The main good point is that they give you an easy way to make a diverse bet across the entire industry.

The biggest and most tenured, Alternative Harvest, invests in about 30 or so companies related to the cannabis industry. Its biggest holding is Aurora.

And its only dividend-paying stock is Scotts Miracle-Gro (NYSE: SMG). Yet the fund pays a 1.74% dividend.

So how does it get that money? Well, it rents out the shares it owns in microcap cannabis companies to short sellers.

You see, cannabis stocks are some of the most shorted in the market. And MJ owns a lot of the shares of these small companies. So it can charge short sellers to rent the shares they want to sell short.

It’s really complicated. And it doesn’t sound like a great idea to me. But it’s been working. The fund is up 38% so far this year.

Now, there’s a new one that just started trading yesterday. It costs a little less than MJ. And it’s only got investments in cannabis stocks (no pick-and-shovel plays like SMG).

It’s going to hold about 40 cannabis stocks ranging from the big players like Aurora and Canopy to the tiny companies like LHS.

Again, I like these because they make it easier for an inexperienced investor to diversify. But I don’t like the market cap weighting.

And I don’t know how I feel about letting someone else pick all my stocks for me. There are bound to be a handful in both that I wouldn’t touch with your 10-foot pole. But you’ve got to take them as they come.

So, yes, I think the ETFs are “OK” investments. But do we really want to settle for just “OK”?

I didn’t think so.

How to Retire on Reefer

We want the great investments. Those are the ones that pave the path to golden years that are truly golden.

And there’s only one cannabis company you should be putting in your retirement accounts.

It’s one of the few guarantees I mentioned earlier...

It literally guarantees you’ll get paid regular income as long as you’re a shareholder.

But it gets better. You see, that income is pretty much guaranteed to keep growing every year for as long as the company is around.

That’s because it’s got a special deal with the federal government. The deal allows it to operate the way it does: as a multi-state cannabis company. But it mandates the company pay 90% of every single dollar it makes from cannabis business to investors.

What’s even better is that the company’s stock is an incredible performer, too. Over the past year and a half or so, it’s absolutely crushed the Alternative Harvest ETF — 240% to 20%.

And even industry titan Canopy Growth couldn’t keep up. It notched a 174% gain compared to our 240%. 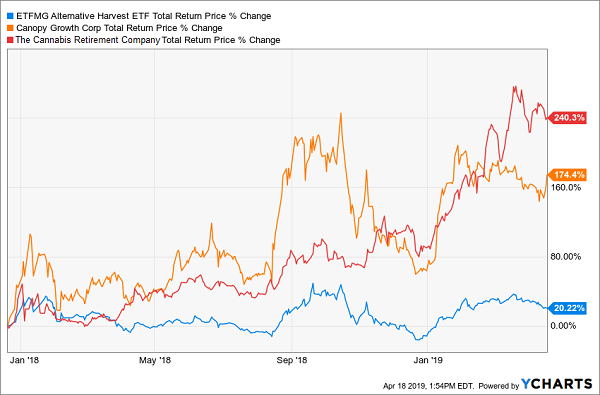 That’s why there’s only one cannabis company I’ll recommend people put their nest egg into. There’s only one out there that really deserves your money.

Because it’s the ONLY one out there that guarantees you’ll get paid.

The founder of our company was so excited about the stock and the opportunity it presents for investors that he insisted I let him put together a presentation to let everyone in on the secret.

You can watch it by clicking here.

Or you can read the report he and I put together by clicking here.

As you can see from the chart, every day you delay is costing you more profit. Don’t wait to act and let another round of pot profits pass you by.

You can thank me from your mega-yacht in a few years.