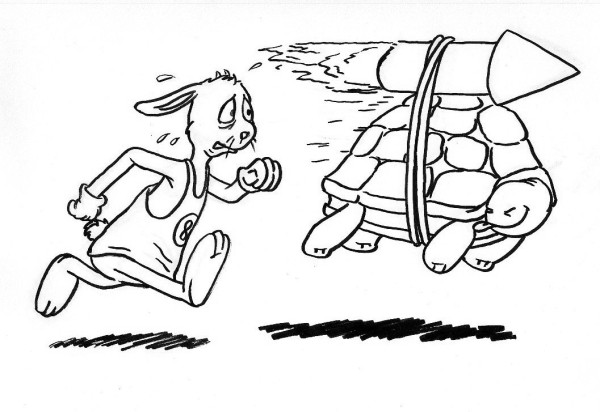 It's no secret that modern Western governments can be incredibly slow when it comes to adopting new legislation. This is particularly true in the U.S., and especially as of late.

The 112th and 113th Congresses, for instance, enacted fewer laws than any other Congress in modern history. It's no surprise Rep. Debbie Wasserman Schultz recently dubbed the 113th the “do-nothingest of do-nothing Congresses” and Sen. John McCain called it, in a word, “Disgraceful.”

The reasons for this inaction are, of course, plentiful. Congress has been highly polarized for some time now, and no one wants to meet in the middle. Elections are also approaching, so no one wants to stir the pot.

Perhaps more importantly, though, is that modern democracy was never designed to move quickly in the first place. Democratic legislation, particularly in the U.S., was intended to be deliberate, purposeful, and slow.

The argument for slow-moving government was originally so that conversations could continue when controversial issues arose. After all, in order to effectively represent all people, those people must be given the time to speak.

Yet while this was certainly a valid merit to governments and legislation moving at a snail's pace at the time, modern advances in technology — which simply could not have been foreseen by America's founders in 1776 — are arguably making that model obsolete.

At the time the American Constitution was written, the ability for people to voice their opinions was drastically different than it is today.

There were no smartphones, no Internet, and no online communication platforms at the time. There was only the printing press, letters, and face-to-face communication — none of which moved at the speed information travels today.

From a technological standpoint, we have the capability to make sure people's voices are heard, but in terms of integrating that capability into our legislative system, we haven't made any progress whatsoever.

Sure, we have websites such as OpenCongress, where citizens can track their representatives, and We The People, where citizens can create and vote on online petitions. But neither site has effectively sped up the legislative process, and neither allows citizens to vote on real legislation.

Consider for a moment that we live in an age where you can vote to determine the Ultimate Super Bowl Snack, yet we don't have a direct say in things like net neutrality legislation. It seems it's about time for democracy to move out of the 18th century.

Ensuring the rapid adoption of technologies was of little importance in the 18th century because advancements weren't outpacing legislation and the economy wasn't heavily affected by disruptive innovations (i.e. the same kinds of plows being used in 1476 were still being used in 1776).

Today, however, the inability to accept technological progress can be of major economic consequence. One-fifth of the S&P 500 is comprised of technology companies, and three of the top five largest market caps today come from the technology sector.

If governments are not quick to establish regulation for emerging technology markets, they will inevitably fall behind those who do.

Of course, you can't exactly blame the Founding Fathers for their oversight. Moore's Law had yet to be written at the time, and the same goes for Ray Kurzweil's Law of Accelerating Returns. No one could have predicted just how quickly technology would begin to move.

Unfortunately, though, at a time when technological innovation is everywhere, our government remains at a near standstill. In many cases, technology has begun to outpace our ability to regulate.

Uber has been connecting independent drivers with passengers across the U.S. for over five years now, and some state governments still have no clue how to respond.

Take, for instance, the recent ban of Uber by the Virginia DMV. The state would rather go back and forth with Uber for over a year discussing its existing laws rather than establish new regulations that would enable the highly demanded service to continue operations.

Our goal is compliance. We have been communicating with these companies for months (going back to December of last year) to educate company leaders on Virginia law. The study underway right now may result in an option outside of what’s currently available, but in the meantime, DMV is enforcing the law as instructed, which does not allow these companies to operate legally in Virginia without proper authority.

Five years to respond, and the answer from the DMV is a temporary ban. Meanwhile, advocacy group Mothers Against Drunk Driving (MADD) has released research showing a significant decrease in drunk driving in cities where Uber opens up operations.

Always good to know states like Virginia are keeping our roads safe.

In 2012, Congress passed the FAA Modernization and Reform Act.

In addition to allocating the entirety of FAA funding, the bill mandated that the administration open the National Airspace System (NAS) to commercial drone flights by the end of September 2015.

Yet when the FAA was audited in 2014, it was found that the agency would likely miss the deadline due to “regulatory hurdles.”

Congressional response to the audit was essentially, “Don't worry about it, guys.” As if opening the U.S. to a potentially $82 billion industry and 100,000 high-salary jobs is no big deal.

Perhaps even more ridiculous is that fact that it took a drone literally landing on the lawn of the White House earlier this week for President Obama to start talking about the drone regulation.

Meanwhile, Amazon, Facebook, and Google are clamoring for commercial drone space A.S.A.P. so they can provide services such as 30-minute delivery and free wireless Internet.

Yet testing for driverless vehicles is open in just three states: Nevada, Florida, and California.

And while the California DMV may have already released regulations on the testing of autonomous vehicles, it missed a deadline for a second set of regulations required by Jan 1. The DMV cited “safety concerns” for the delay.

Meanwhile, Google's driverless vehicles have driven over 700,000 miles without getting into a single accident not caused by a human driver (one driverless vehicle was rear-ended, and another crashed while under human control).

For perspective, the average U.S. driver has an accident every 165,000 miles, according to data from the Federal Highway Administration, meaning the technology has proven about four times safer than human drivers.

It's pretty difficult to hide under the guise of “safety concerns” with data like that.