For the past few summers, I’ve been spending my vacation in Wisconsin to spend time with my family and to take a break from my East Coast life. I always look forward to these summer vacations because I get to hang out with my dad and experience the serenity that comes with being secluded from the general population.

He has a beautiful home that’s surrounded by the woods. We spend most of our time just sitting out on his veranda listening to the birds chirping, and when we’re not doing that we’re usually having conversations about life and what’s going on in the world.

During my most recent visit, the topic of politics and legislation came up, which led to talking about electric vehicles. My dad lives in a small town and he’s always driving at least 30 minutes or so to go get groceries or to run errands. Or traveling an hour and a half to spend time with my older brother and his family.

Driving long distances is essential to my dad. He drives everywhere and sometimes those trips can be three–four hours long each way. When he started talking about electric vehicles and the Biden administration’s push toward “cleaner” alternatives for fuel and energy, I was intrigued to hear his point of view. He has a different lifestyle than me. The farthest I drive in a day is 15 miles. I could tell as soon as he started talking that he was hesitant about the idea of electric vehicles.

Are EVs for Everyone?

He was also a little bit frustrated, and I can understand where he was coming from.

First, he just bought a brand-new truck and felt like if he had known EVs were becoming more a reality, he would have held off a bit on buying a new vehicle. Besides Elon Musk and his electric vehicle company, Tesla, EVs haven’t received that much media attention in the past few years. It kind of just seemed like something cool that would eventually happen.

A lot of the recent media attention has come from the constant battle in Washington, D.C., about needing the money to fund technology and companies that will provide clean energy and put America on the path to alter the effects of climate change. This is the time that a lot of countries, especially America, need to start making big decisions and changes to try to prevent the environment and climate from getting worse.

So even if the EV market wasn’t on your radar in the past few years or you thought EVs were a distant reality, that wasn't the case for a lot of automakers. These automakers understood where the automobile market was going, and that meant they needed to start developing and building their version of an electric vehicle.

That’s why you are seeing these automakers revealing their version of the electric car, truck, or SUV. And they’re ready to make deals to get their new products to customers.

Going back to that conversation with my dad — another point that he brought up was that he hasn’t seen an electric vehicle or truck that would have enough charge for him to make the long trips that he does. He was concerned that he would have to be constantly charging his vehicle.

He was also concerned about where he would charge it, since he lives in rural America, which also brought up the question of how long it would take to charge his vehicle. Would he have sit be sitting around for a while at an electric charging station waiting for his vehicle to have enough power to take him to his destination?

Honestly, these are all fair concerns. The infrastructure to support electric vehicles isn’t there right now, and if we want people to be driving around in electric vehicles, that should be one of the biggest priorities. Everyone should have access to that infrastructure, too. Otherwise you are limiting part of the population, essentially leaving behind a part of the country that’s supposed to be an important part of fighting climate change.

Meeting the Demand for Electric Trucks

Back to my dad, who rather have a truck than a car or SUV (and probably isn't the only one in that situation). He is constantly doing projects at his house and going on weekend trips for which has to tow his RV. He needs a vehicle that will have those capabilities. And I suspect that when people think about electric vehicles, they think about Teslas. But I think that perception is about to change...

Ford (NYSE: F) has unveiled its 2022 F-150 Lightning, which is the company’s new all-electric truck. It’s ready to make a splash in the EV market and attract Ford's truck customers.

The company was founded in 2009 and had been working on electric sports cars before it decided to switch over to electric pickup trucks, SUVs, and commercial vehicles. Rivian’s first product line is about to enter the market. 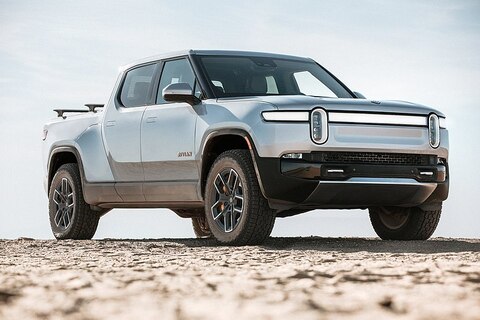 Actually, Amazon (NASDAQ: AMZN) and Ford are strong investors in Rivian. Ford holds a stake greater than 5%, while Amazon disclosed that it owns a 20% stake in Rivian that equals about $3.8 billion.

These are two big investors for Rivian and could help the company fulfill its goals of providing products to the public. The company’s initial launch vehicles are expected to enter production by the end of this year. Its R1T and R1S are its current flagship models.

In addition to making vehicles, the company also will have a second plant in Texas that will produce EVs and battery cells. This will help Rivian achieve its goals of creating a broader vertical integration.

As of September 30, 2021, Rivian had "approximately 48,390 R1T and R1S preorders in the United States and Canada from customers who each paid a cancellable and fully refundable deposit of $1,000."

Amazon is also a customer of Rivian’s. Both companies entered into an agreement back in 2019 indicating that Amazon will purchase 100,000 electric delivery vans from Rivian, and Amazon could have the majority of those vans by 2025.

The company’s IPO and the investments from Ford and Amazon will be able to finance Rivian’s future growth and ramp up its manufacturing so that it can get products to customers and start making revenue.

According to Rivian’s S-1, which it recently filed with the SEC, it doubled its net loss to $1 billion in 2020 and has already reached $994 million in net losses in the first half of 2021.

Rivian has plans of going public, and the S-1 at shows the company is seeking a valuation of up to $80 billion.

It plans to list on the Nasdaq under the ticker symbol “RIVN.” Rivian’s IPO is expected to happen sometime in November.